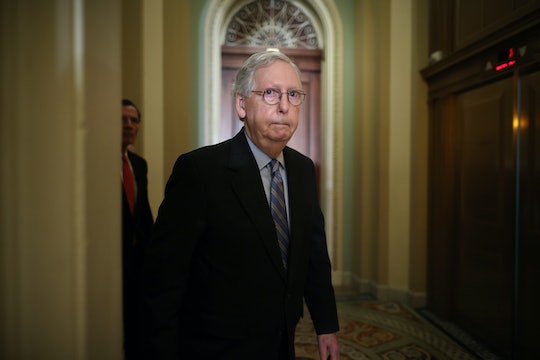 Mitch McConnell, Some Of Us Have Actually Lived Through A “Toddler Takeover”

On Tuesday afternoon, Senate Minority Leader Mitch McConnell took to the Senate floor to denounce the Build Back Better bill, which is coming up for a vote in the coming weeks. McConnell took aim at the child care portion of the bill, which has already passed in the House and is set to expand child care credits and establish universal pre-K. While many have celebrated it, McConnell claimed (without evidence) that the bill was tantamount to government control of child care, declaring it a “toddler takeover.” To this I say:

Every year, millions of Americans experience actual toddler takeovers when their angelic infants transform into heartless and power-hungry conquerors before their very eyes. Your flippant use of the term shows me you do not understand the gravity of what those words actually mean. I have lived through not one but two harrowing toddler takeovers: let me paint you a picture of what that’s actually like.

Your day starts at 5 a.m., when your toddler dictator emerges from their fitful slumber… that is unless you have to be out of the house at a certain time. In that case, your day starts with you prying your screaming toddler out of bed as they cry, in their most adorable and disarming voice, “But mommy! I’m so sweepy!” which will make you feel like a horrible parent and a monster. You will then have to feed your overlord. I recommend fixing a delicious, healthy bowl of whole grain cereals and fruits, and then just going ahead and dumping it directly in the trash before hurling a fistful of goldfish at the now hangry child.

Your house has been completely conquered. It is no longer yours. Your carefully chosen furniture is covered in fingerprints, markers, and spilled drinks. “Throw pillow” is a term taken literally. At first you may feel the urge to create fortifications (a term toddler takeover survivors refer to as “child proofing”) but, like the wily velociraptors in Jurassic Park, they quickly learn how to get around things like doors and cabinet locks and whatever else you’ve set up in a vain attempt to salvage your living space.

It’s not just your living space, though. If only it was simply a toddler takeover of your space! They’ve taken over your life. From the car (chaos) to the grocery store (public humiliation), they have claimed the space. Oh! And you are legally required to have them with you at all times unless you find a volunteer or pay a mercenary (aka babysitter).

You live in fear of their wrath, mainly because you never know when it’s going to strike. Living in a toddler takeover, you learn to find silver linings wherever you can. Like the fact that you can’t actually see the home they’ve destroyed through the newly constructed mountains of toys you swore would “stay in the baby’s room.” Incidentally, most of these toys are the result of your toddler’s savvy political alliance with their grandparents — their betrayal is among the cruelest of your new realities.

Other Toddler Takeover survivors have taken to Twitter to express their own experiences.

“‘Toddler takeover’ also describes my house literally everyday,” tweets Burgess Everett, who clearly understands that this cruel act of parental usurpation is not something to be uttered lightly or to callously grab political points.

“‘Toddler takeover’ is quite literally the reason I'm so sleep deprived I can barely tie my shoes,” agrees fellow parent Seth Mandel. We see you comrade. Courage.

Twitter user @dabbs346 took a moment to remember, perhaps, the most famous toddler takeover of the past decade:

Professor Robert Kelly, who succumbed to a sneak attack he couldn’t have seen coming. I think I speak for all of us when I say we all remember where we were that day.

“I’m sorry,” tweets @MeredithShiner, “but a ‘toddler takeover’ is when you put a medley of vegetables on a plate and then the toddler painstakingly picks out the peas … and throws everything else … to the floor.” Clearly Ms. Shiner has studied toddler takeover aerial assaults.

User @thetweetofpain joked that they “welcome our new Cherub overlords,” but, like McConnell, doesn’t realize how deadly serious Toddler Takeovers can be. Friend: a little sensitivity for those of us who still live with the memories of our toddler takeovers, and those who, bless them all, are living through it as we speak.

More Like This
Lawmakers Passed Two Bills To Address The Baby Formula Shortage
New Dad Pete Buttigieg Shares Family’s Struggle To Find Baby Formula
Two Young Children Have Been Hospitalized Because Their Formula Is Out Of Stock
13 Moving Photos Of Kids, Families, & More Protesting Abortion Rights Across The Country