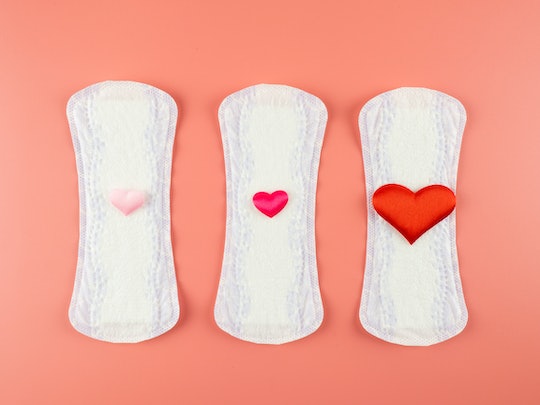 Do you remember when you first found out about menstruation? When you learned that bleeding for several days once a month would be part of your life whether you liked it or not? It’s pretty rough, so must could totally understand why one mom’s explanation of menstruation to her 4-year-old daughter prompted a Victorian-era reaction from the child.

Writer Virginia Sole-Smith tells Romper that her 4-year-old daughter has been asking lots of questions about where babies come from recently. “She asked something like ‘when can people have babies?’” Sole-Smith says. “So I explained puberty and menstruation (and how even though kids’ bodies are getting ready then, they aren’t ready to be parents till they are grownups!). And she was totally with me till we got to the blood part.”

Her daughter’s attitude shifted pretty quickly, and Sole-Smith took to Twitter to share it with her followers: “At dinner tonight, I explained menstruation and my almost-4yo was so distraught she took to her bed. Follow for more great parenting tips.”

This 4-year-old’s reaction to menstruation really nailed it.

Like a miniature character from a Victorian book, she took to her bed. And it seems she wasn’t the only kid who had a big reaction to finding out about menstruation. “When I explained periods in more detail to my 9yo, she was horrified to learn you bleed for days,” one mom responded to Sole-Smith’s tweet. “Up till then, she thought it was temp bleeding like when you skin your knee. She cried herself to sleep that night.” Another mom wrote that her daughter was felled by the lack of choice she had in the matter, “When I told my daughter, right around that age, response was: ‘WHAT? But what if I don't want to do that?’”

Sole-Smith tells Romper that the menstruation conversation continued in her household later that night. “We had a follow-up talk that night after she finished being upset,” she says, “she wanted to see a pad and understand how much blood and we went through all of that.”

It’s tough for kids to find out that they are basically going to bleed every month unless they are pregnant or hitting menopause. But nothing good comes from being secretive or squeamish about women’s bodies. Just take to your tiny fainting couch for an afternoon and then move on, just like this little 4-year-old.

More Like This
AAP Now Recommends Mothers Breastfeed For 2 Years Or More In New Guidelines
This Reddit Post About Two Sisters In A Fight Over Breast Milk Is Complicated & So Sad
Reddit Is Not Impressed With Dad Who Hid Neighbor's Gnome Because It Scared His Kid
This Map Illustrates Just How Many States Would Ban Abortion If Roe V. Wade Is Overturned