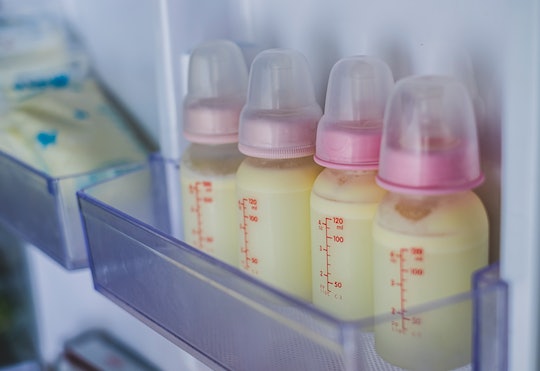 “I told her I emotionally cannot handle it any longer.”

The national infant formula shortage has had an unexpected consequence for one family. When two sisters gave birth within a week of each other, one sister was able to pump breast milk while the other was not. At first, she was happy to help her sister out, but as she explained on the sub-Reddit forum Am I The A**hole, she simply couldn’t do it any longer and many believed she had good, and heartbreaking, reason to call it quits.

The Reddit user shared in her post that she delivered a stillborn baby five weeks ago, while her sister delivered a baby boy one week later. “After my stillbirth, I was producing milk and pumping, and my sister couldn't breastfeed after her son was born,” she wrote. “Formula shortage was awful and I was literally throwing my milk away, so I offered it to my sister and she gladly accepted.”

The woman went on to pump for her sister for five weeks, two weeks longer than her doctor had suggested, and decided it was time to stop. “Now that there is more formula in stock and she has been able go buy it, I told her I'll stop pumping,” she shared.

While plenty of people would have applauded the generosity of a grieving mom pumping breast milk for someone else’s baby, her sister had different feelings when she was told she had to stop. “She told me her son has stomach problems after the formula and asked me to keep pumping. I told her I emotionally cannot handle it any longer,” the Reddit user shared. “She said I am being selfish and she already has to feed her son by bottle.”

In fact, the sister initially wanted the Reddit user to breastfeed her baby daily as she lived next door, but she refused. When the poster offered to pump for a few more days to give her extra time to find a suitable formula, her sister told her that she should just continue to “help her out.”

Sadly this poster’s sister has called her an a**hole for not continuing, and even her mother has asked her to keep at it. Pumping breast milk for a baby even as she is grieving the loss of her own only five weeks after the fact.

Fortunately she has Reddit users on her side. “You shouldn't be bullied into continuing your milk production and then pumping when this is time for you to grieve. You were kind enough to continue for 2 additional weeks, she needs to be grateful and move on,” wrote one social media user.

Another offered words of support for what was certainly an incredibly generous gesture at a time that must be difficult for her, “you were incredibly kind while going through one of the most heartbreaking things a human being can endure. You deserve a medal for being so selfless at this time, and it's beyond dreadful of your sister not to realise that.”

Finally, one Reddit user offered this mic drop response, “NOBODY is entitled to YOUR body. NOBODY.”

This mom of a stillborn was incredibly generous to help out in a difficult time in her life. Hopefully her sister will understand that, say thank you, and find a solution for feeding her own baby.

More Like This
AAP Now Recommends Mothers Breastfeed For 2 Years Or More In New Guidelines
How Long Does It Take Breast Milk To Dry Up?
Breastfeeding Twins: Everything You Need To Know
How To Breastfeed A Baby With A Cleft Lip Or Cleft Palate