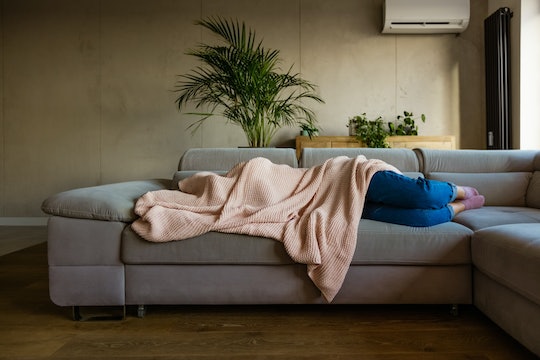 “Am I overreacting ... Is it normal for your babysitter to fall asleep when they’re watching your kids?’

Leaving your baby with a babysitter for the first time is fraught with truly every emotion there can be. You’re scared, you’re free, you’re worried that your babysitter won’t do a good job. But what constitutes a “good job” really? Staying awake would be a good start, according to one mom on TikTok who was distraught after seeing her babysitter asleep on the job through her home cameras. Now the viral TikTok has sparked a debate about whether or not a babysitter can or should sleep on the job.

First-time mom Danielle Mitchell (@danimariemit) shared a video on TikTok last week to ask if she was “overreacting” about her babysitter falling asleep while watching her 10-month-old son on a Friday night. Her baby boy was rocked to sleep by his babysitter, “and then he was asleep for the rest of the night,” she explained.

“We were only gone for three hours, from 6:30 to 9:30, and we have cameras throughout our house,” the mom went on to explain. “Around 9 o’clock I checked the cameras and it looks like she’s asleep on the couch.” Mitchell initially thought her sitter might be listening to a book, but when she texted her to ask her to bring the dog in, she didn’t move.

The couple continued to check on camera but didn’t see the babysitter wake up, which left this mom questioning if this is actually okay. “He’s also asleep. But he’s only 10 months, and I don’t know if she would hear him if he woke up and started crying.” They decided to go home and then woke up the babysitter, although it apparently “takes her a second” to wake up. So now she wants to know, “is it normal for your babysitter to fall asleep when they’re watching your kids?”

Naturally people had some feelings about the situation. Some people felt that there was nothing wrong with the babysitter falling asleep in certain conditions.

“If the kid(s) are asleep, it is normal for the babysitter to fall asleep. However, the monitor should have been on and turned all the way up,” one social media user wrote.

“Dad of 5 here. Unless your child has some at-risk medical condition, it’s fine for the babysitter to sleep. IMO.”

Others, however, did not agree.

“Used to babysit a lot as a teenager. I would NEVER sleep at someone’s house while on the job. And that’s even when the kids are older,” wrote one social media user.

Another noted that it was a pretty short shift to be sleeping on the job. “As an experienced baby sitter, unless you’re staying the night, then definitely don’t fall asleep. Especially if your only there till 9.30.”

Ultimately, the original poster explained in a comment on her post, “I’m learning everyone has their own opinion, but it def makes me more comfortable for a sitter to either not nap or have the monitor at 100%.” Babysitting resource website Kidsit also recommends that babysitters stay awake while working, unless babysitter overnight or checking first with the parents to make sure napping is okay. Even then, it’s a good idea to set an alarm and keep a monitor on high to listen for any problems. Perhaps especially if babysitters are only on duty for three hours.