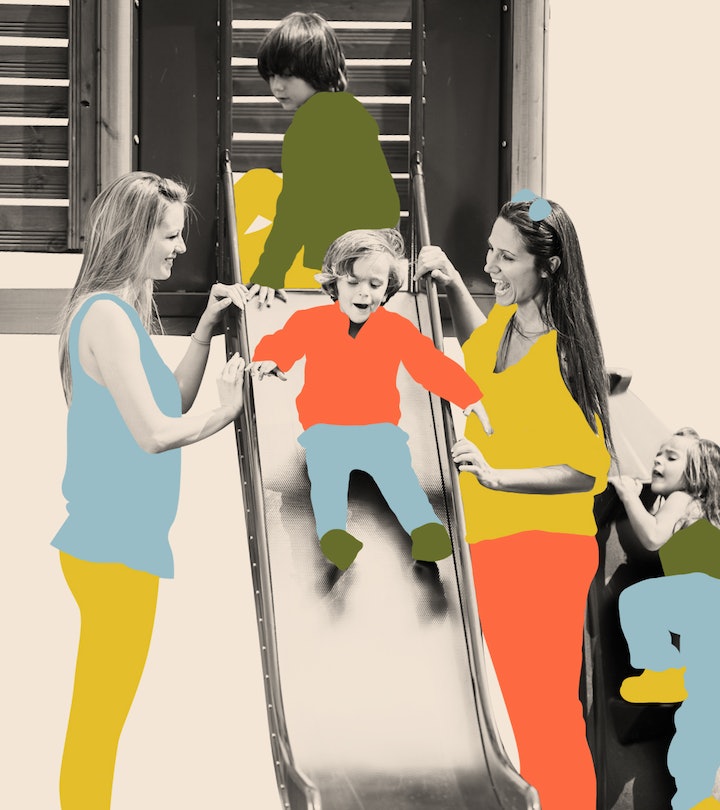 Why Making Mom Friends Is Worth It, Even In A Pandemic

In a year when everyone’s social skills have gotten a bit rusty, it can be helpful to remember that we can do small things that help us feel more connected.

This past spring, after a winter spent mostly indoors watching Minion movie after Minion movie, I found myself again on the sidelines of T ball practice, making small talk with other parents. I was amazed by how energized I felt, just chit chatting with people who don’t live in my house. We had family and close friends we’d kept in touch with via text, Marco Polo, zoom happy hours — but I’d missed these moments of casual connection. Even if you’ve got a great mom group chat, it’s not a replacement for the zing of energy that comes from in-person conversation.

Chatting with the mom with the cool booties or the mom with the adorably-hair-bowed new baby or the mom whose kid played sweetly with my goofball son while he made dirt piles in the outfield, I felt a familiar ripple: Could these women be my new mom friends? But even in normal times I’ve found it challenging to transition from casual chatting to real friendship. The restrictions of the pandemic, with its fraught dance of risk mitigation, have made socializing even trickier. What’s the best way, I wondered, to strengthen those casual connections — to maybe even bridge them into a stronger friendship?

Because I love few things more than a research project, I started reading studies from social psychology about friendship. It turns out we have a word for the loose kind of social relationship I’d already developed with the T-ball moms: "weak ties." A weak tie, psychologist Gillian Sandstrom told me over Zoom, is basically anyone who’s even “one baby step up from a stranger.” Weak ties provide information and novelty, two things we’ve been in desperate need of during the pandemic. People with more weak ties have an easier time finding a new job because they have a broader network to draw on; more specifically relevant to the pandemic, more weak ties means more helpful intel, like the tennis buddy who told Sandstrom about a bakery where she could buy flour during the first weeks of the lockdown, when it was scarce.

Going even slightly out of your way to connect with a weak tie — pausing to chat with a neighbor whose flowers you’ve admired or saying hello to other parents at karate — can actually provide a boost to your well-being.

Sandstrom’s research has found that weak ties actually do positively impact happiness and well-being. In one study, people were asked to count the number of weak tie interactions they had in a given day, then report on how they were feeling. This study had two important findings, she told me. First, people who have more weak tie interactions overall tend to be happier. But she also found that, even if you’re someone who doesn’t usually have a lot of casual social connections, “If you have more on a given day than you usually do, you tend to be happier on that day than you usually are.” So this means that going even slightly out of your way to connect with a weak tie — pausing to chat with a neighbor whose flowers you’ve admired or saying hello to other parents at karate — can actually provide a boost to your well-being.

Research has found that these connections are especially important for parents, and for mothers in particular, who’ve borne much of the burden of pandemic parenting. According to a study on maternal mental health during the pandemic, Covid-19 and its reworking of our day-to-day lives puts mothers increasingly at risk for depression and anxiety. Much of this is because, as sociologist Jessica Calarco put it in an interview with Anne Helen Peterson, “Other countries have social safety nets. The U.S. has women.” A new friend isn’t anything close to a cure-all for any of our current problems, but a more vibrant network of weak ties can improve our well-being, even in a difficult time.

Close friendships are built through consistency, positivity, and vulnerability.

In her 2016 book Frientimacy, Shasta Nelson explains that close friendships are built through consistency, positivity, and vulnerability. When I talked to people about how they’d made new friends during the pandemic, consistency was a recurrent thread.

Chelsea B DesAutels, a writer who lives in Minneapolis, told me about befriending two moms from her daughter’s preschool. They began meeting for hikes because they were worried about their only children missing socialization, and a friendship grew out of those weekly outdoor meetups.

Jo Lackey, a professor in New York state, began a friendship with another mom after their daughters met at a playground. The other kid noticed that both girls had similar handmade beaded mask chains. They met up once a week for months, Jo told me, and their daughters help keep the friendship going by asking about each other regularly.

This consistency can be built through the casual, low-stakes hangouts that are actually really well-suited to pandemic restrictions. Inviting a mom you’ve just met into your house for dinner might not be something you’re up for right now, in terms of either pandemic safety or a next step in the friendship. But a park hangout or hike is both safe and low-stress. Consistency might also mean extending a regular point of contact into something more intentional, like suggesting a pizza dinner with another family after soccer practice or a park meet-up after dance class.

In general, people are anxious and a bit self-critical about their own performance in conversations when they’re getting to know someone new, but the other person isn’t as critical of them as they are of themselves.

Another theme of my conversations was the nervousness that so many of us feel when reaching out. It can be scary to strike up a conversation with a stranger or invite a weak tie to a more intentional get-together. But Sandstrom shared something with me that I found enormously encouraging: In general, people are anxious and a bit self-critical about their own performance in conversations when they’re getting to know someone new, but the other person isn’t as critical of them as they are of themselves. As her paper on this phenomenon (“the liking gap,” she calls it) lays out, when people engage someone new in conversation, “they are liked more than they know.” Sandstrom told me that in her research, “The tip that resonates with most people is just ‘be brave.’” She added, “Be brave, people like you more than you think.”

Once you’ve gathered up your courage to invite a possible friend to get together, what kind of gathering are you actually proposing? In her book The Art of Gathering, Priya Parker warns against confusing a category (birthday party, board meeting, book club) with a purpose. Our purpose, she explains, should be something deeper and specific to the particular gathering. The real purpose of a book club, for example, probably isn’t just to read a book and talk about it, but to connect with friends and neighbors as we discuss issues that matter. Given that the pandemic has thrown all of our regular categories into disarray, with everything from weddings to Thanksgiving dinner being shared across Zoom and Instagram, or choreographed outside and distanced, it’s a good opportunity to shape new kinds of gatherings with distinct purposes.

For many of us, especially those of us with unvaccinated children, spending time with others and building community in a way that feels safe shapes our purpose. If there’s a mom you’re hoping to get to know, you’ll want to pick an activity kids can do without much adult intervention. This might mean rigging up the bubble machine and a pile of chalk, or meeting at a playground where you can sit but keep your kids in easy sight. But if you’re feeling nervous about having enough to say, you might pick an activity everyone can do together, like stomp rockets or cornhole. (For my younger son’s birthday in May, my dad sent a game called Flickin’ Chicken that involves — just as you’d guess — tossing rubber chickens, and it’s been a hit.)

Basically all of us want more connection in our lives.

In a year when everyone’s social skills have gotten a bit rusty, it can be helpful to remember that we can do small things that help us feel more connected. Half an hour chatting on the porch while the kids blow bubbles could do as much to start a new friendship as a more involved and more stressful multi-family cookout. (And a front porch or sidewalk play date means you don’t have to clean your house!)

Talking to people about friendship for this story reminded me of something important: Basically all of us want more connection in our lives. People told me they’d made new friends on bike rides, at outdoor exercise classes, at the park. They’d gotten together for coffee, or just hung out in their yard. These stories also reminded me that it’s really normal to feel a little nervous about being the one to initiate. But I’m going to take Gillian Sandstrom’s advice and be brave. The next time I see one of those moms I liked from T-ball, I’m going to ask for her number and invite her over. She might already like me more than I know.