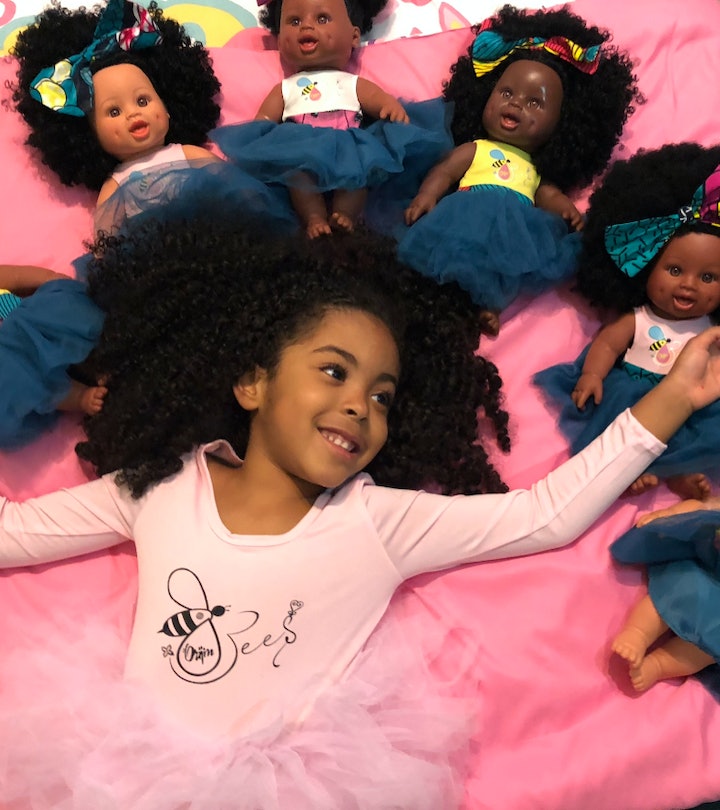 Melissa Orijin wanted to create baby dolls that her daughter could relate to. So instead of waiting for one to appear at the store, Orijin and her 6-year-old daughter Esi founded Orijin Bees, an inclusive line of dolls made for the beautiful melanin girls in the world that’s now available at Target.

Founded in 2018, Orijin Bees stands for “Our Representation is Just Inclusion Normalized. Beautifully Empowering Every Soul” and represents “girls of different skin complexions and hair textures,” according to its website.

“That is what our goal is and what we set out to do every day,” Orijin tells Romper. “We want to find ways to develop more products that offer representation for Black and brown communities. We want to encourage self-love and promote self-worth by teaching children in their early years through the world of play.”

The line of toys includes the Bee Baby doll, which has curly fros and big bows. Described as “dynamic, smart, kind, confident and beautiful friends,” the 18-inch Curl Girlfriend line includes the Laila, Keisha, and Jacinta limited edition dolls. All of the dolls were created to be representatives of Black, African American, Latino, Biracial, and Caribbean heritages.

If every child’s toy box looked like the world around them, we would have a much more peaceful and tolerant society.

“I think we sometimes underestimate how much kids absorb from the world around them,” Orijin says. “When a child like Esi sees a doll that looks like them, it reminds them of their self-worth.”

Orijin says Esi struggled with loving her own skin and curly hair, and hoped the dolls would empower her daughter. “Representation is everything,” she says. “There isn’t a day that goes without Esi and I having a conversation about representation.” Indeed, from Disney princesses to public figures, representation matters significantly to young girls of color.

Esi has been hands-on in the company since day one and is their brand’s biggest advocate, Orijin says. In fact, she asked her mom if could take one of her Baby Bee Dolls to show-and-tell at school, which made Orijin “shed a few happy tears.”

Orijin Bees is one of those brands many parents wish they had as kids. “Adults know what it’s like to grow up without seeing yourself reflected and represented in something as simple as your toys,” Orijin says. “When they see how joyful the doll makes their child, it’s a full-circle moment.”

One purchase pattern Orijin loves is that parents are buying a lot of multicultural dolls to diversify their child’s play areas. “They're a way to teach them about diversity and inclusion through the world of play. Every child should learn about this, especially if they’re not exposed to diverse groups of people within their environment,” she says.

The company is also expanding its reach through its GetONE GiftONE program, in which dolls are gifted to disadvantaged girls around the world. “The focus is to gift dolls to children who don’t have a doll that looks like them and their circumstances may not give them an opportunity to have a doll otherwise,” Orijin explains of the program, which was inspired by a trip to Cuba where Esi saw a little girl that resembled her doll and asked her parents if she could give it to her. It’s a small but adorable reassurance that their melanin is beautiful and a reminder that representation matters.

“If every child’s toy box looked like the world around them,” Orijin says, “we would have a much more peaceful and tolerant society.”