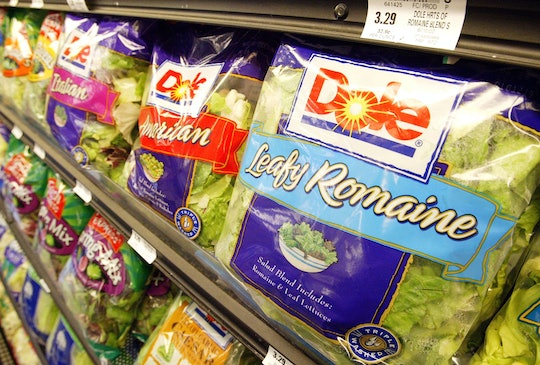 These Packaged Salads Have Been Recalled As CDC Investigates Listeria Outbreak

Listeria can cause serious and sometimes even fatal infections in young children and miscarriages and stillbirths in pregnant people.

The U.S. Centers for Disease Control and Prevention (CDC) is warning consumers not to eat or serve recalled packaged salads from Dole and Fresh Express. Several brands of packaged salad products have been recalled by both companies due to concerns of potential Listeria contamination. Listeria can cause serious and sometimes even fatal infections in young children and those who are frail, elderly, or known to have a weakened immune system.

“The CDC is currently investigating two separate Listeria outbreaks linked to packaged salads,” the agency said in a note posted to its website Wednesday. “Do not eat any recalled packaged salads. Throw them away or return them to where you bought them.”

Fresh Express recalled select varieties of its branded and private label products on Monday, citing possible Listeria contamination. According to the Food and Drug Administration (FDA), a random sample test conducted by the Michigan Department of Agriculture on a single package of Fresh Express Sweet Hearts salad mix came up positive for Listeria monocytogens. Since then, the CDC has reported linking 10 illnesses to the Listeria strain identified in Michigan’s sample test.

But Michigan is not the only state believed to have received potentially contaminated salad products. The FDA has reported recalled Fresh Express salad products were distributed across the Northeast and Midwest regions and include all fresh salad items with Use-By Dates of with product codes Z324 through Z350. A complete list of Fresh Express’ recalled salad products can be found on the FDA’s website.

Concerns over a second possible Listeria outbreak caused Dole Fresh Vegetables to announce Wednesday that it was voluntarily recalling all branded and private label packaged salad products that had been produced at processing facilities in Bessemer City, North Carolina, and Yuma, Arizona. According to the FDA, Listeria was found in a single package of Dole-branded Garden Salad produced in Bessemer City as well as in a single package of shredded iceberg lettuce produced in Yuma. At least 16 illnesses have since been linked to the strain of Listeria found by the CDC.

Recalled Dole salad products were distributed to more than half a dozen states in the northeast, midwest, and southern regions. A full list of the salad products recalled by Dole as well as their associated product UPCs can be found on the FDA’s website.

Consuming food contaminated with the Listeria monocytogens bacterium can cause a serious infection known as Listeriosis. Although most likely to sicken children, pregnant people, adults over the age of 65, and those with weakened immune systems, Listeria can also sicken healthy adults with short-term symptoms like fever, severe headache, stiffness, nausea, abdominal pain, and diarrhea. Pregnant people, however, are particularly at risk for illness as the CDC has noted they are 10 times more likely than others to contract a Listeria infection.

More Like This
Here’s What You Need To Know About That Viral 1960s Baby Formula “Recipe”
Abbot's Formula-Producing Plant Can Reopen In As Early As 2 Weeks — Now What?
Kelly Ripa Loves A Sunday Dinner Date With Her Grown-Up Kids
Biden Signs Law Banning Unsafe Infant Sleep Products Attributed To Over 200 Deaths