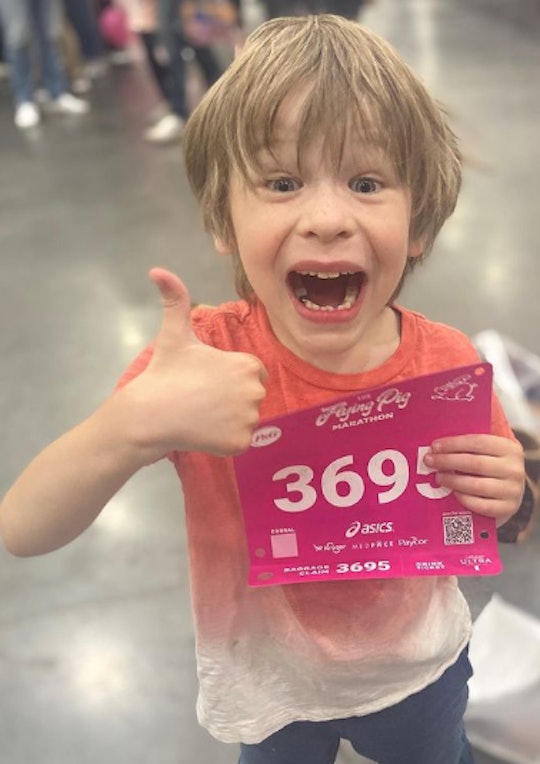 When 6-year-old Rainier Crawford ran the Flying Pig marathon in Cincinnati with his parents earlier this month, the family probably didn’t expect the very public backlash they received. Not just from other people at the race but on social media as well. The boy’s parents, Kami and Ben Crawford, are YouTubers with over 47,000 followers who are accustomed to sharing their family’s life on social media, and have documented the family’s active lifestyle over the years. But in this instance, it seems, some thought they went too far. So much so that Child Protective Services (CPS) were called to the family’s home to investigate their 6-year-old son’s inclusion in a 26-mile marathon that took him eight hours to complete.

“Yesterday Child Protective Services (CPS) arrived at our home unannounced and interviewed our children, parents & grandmother,” the couple shared in a statement on Instagram earlier this week. “This is a scary process because usually children are interrogated away from parents, against their will, and their answers determine the agency's legal right to take away the kids. CPS requires SPECIFIC actions be reported like times, locations and specific abuses. Since these do not exist people had to make them up.”

The Crawfords, who run their Fight for Together YouTube channel, went on to note that someone had reported they had dragged their 6-year-old son after the 13th mile, but this was not correct. The Crawfords asserted that their son wanted to compete in the marathon and “his biggest complaint about the ending was that he was so excited but had to hold our hands implying he wanted to go faster, not slower.”

The Flying Pig marathon has an age restriction of 18 years and up, and the Crawford family had several children under that age limit running with them. Race organizers told WCPO in a statement that they allowed the 6-year-old to participate because his father “was determined to do the race with his young child regardless.” The statement added, “They had done it as bandits, in prior years, before we had any knowledge of it and we knew he was likely to do so again.The intent was to try to offer protection and support if they were on our course (Medical, Fluid and Replenishment).”

The Crawfords also addressed the backlash they received from Olympic runners like Kara Goucher, who tweeted “I don't know who needs to hear this but a six year old cannot fathom what a marathon will do to them physically. A six year old does not understand what embracing misery is. A six year who is ‘struggling physically’ does not realize they have the right to stop and should.”

“When world class olympians with international stages like Kara Goucher & Lee Troop use their large platforms to broadcast absolute moral imperatives without nuance they need to take responsibility when the public tries to enforce these moral imperatives. Witch hunts will be created,” their statement went on to say.

The Crawford family did not reveal the outcome of this investigation, but Ben Crawford did tell TODAY Parents, “Some of the kids have been having emotional breakdowns because of all the hate and judgement from people declaring they shouldn’t be allowed to run, and fear from CPS coming to our house.”

Rainier appears well in photos of him shared on his parents social media channels in the days since the race.

More Like This
This Mom Gave Birth On Graduation Day, So The University Brought Her Degree To Her
Reddit Is Stunned By Mother-In-Law Trying To Breastfeed Her Granddaughter
Please Stop Telling Moms To Breastfeed As Baby Formula Shortage Worsens
This Free Website Connects Parents Who Need Formula With Those Who Have It