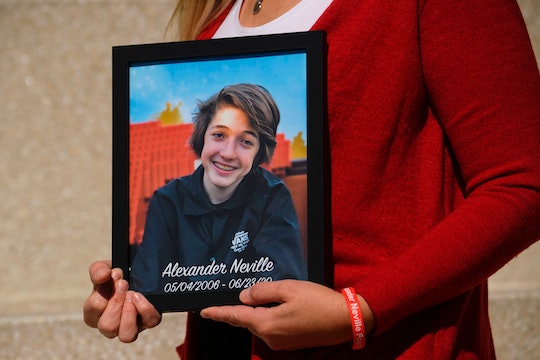 Here’s what you should know about this tragic trend.

Amy Neville describes her 14-year-old son, Alexander (called Alex), as a “normal, average teenager with a loving and supportive family” before his death on June 23, 2020. He was, his family says, a highly empathetic big thinker full of curiosity and a drive to be better. But as Alex got older, those trademark big feelings turned to hurt, which he began to self-medicate. He died from fentanyl poisoning — a drug he mistook for something else he purchased on Snapchat. Unfortunately, Alex’s story shines a light on a troubling trend in teen overdose deaths. In a statement, ParentsTogether, a national parent and family advocacy group, is warning members about rising fentanyl deaths among teens and the role social media often plays in this grim statistic.

Overdose deaths among teens have soared in the past two years.

While drug use rates among American teenagers remain at an all-time low, overdose deaths spiked precipitously in 2020 and again in 2021, according to research published in the Journal of the American Medical Association (JAMA). Researchers found 518 deaths in 2010, and a steady rate of 492 deaths each subsequent year through 2019. In 2020, that number soared to to 954 deaths and 1,146 deaths in early 2021. Children of color have been the hardest hit by the fentanyl crisis, with the highest increase in deaths among Indigenous, Latinx, and Black youth.

A reason for this terrible uptick is due to the pervasive use of non-pharmaceutical fentanyl in counterfeit pills. At 50 times stronger than heroin, it takes less fentanyl to kill than other drugs. If someone takes a pill thinking it’s, for example, OxyContin, but it’s actually laced with fentanyl (or straight fentanyl), the results could be deadly. Unfortunately, many people do not realize they’re consuming fentanyl, as was the case with Alex Neville and many, many others. The Drug Enforcement Administration (DEA) posits that a third of all counterfeit pills contain fentanyl. Synthetic opioids like fentanyl are responsible for 66% of overdose deaths in the United States.

Drug poisoning or overdose is the leading cause of death among Americans 18 to 45, according to data from the Centers for Disease Control and Prevention (CDC). Among children, substance abuse is the sixth most common cause of death, per data from the Kaiser Family Foundation.

Social media apps have changed the way many companies and individuals do business, and drug dealers are no exception. The DEA confirms that apps like SnapChat, Instagram, TikTok, Twitter, Facebook, YouTube, and others are regularly used to sell illegal drugs of all sorts.

“Prospective buyers contact drug traffickers on social media apps in response to their advertisements — either using direct messaging or by commenting on a post,” the agency writes in a statement, noting that coded hashtags or a series of emojis are commonly used to avoid detection. “Once contact is made, drug traffickers and potential buyers often move to an encrypted communications app like WhatsApp, Signal, and Telegram.”

ParentsTogether urges tech companies to address the crisis of drug sales on their platforms, suggesting steps such as flagging posts that promote the sale of drugs online with a warning about the pervasiveness of fentanyl in street drugs; more careful monitoring of known outlets used to coordinate the production of drugs on apps (deleting listings for chemicals used to make fentanyl, for example); and provide a free platform for evidence-based resources that provide information and tools to parents and kids about substance use, treatment, harm reduction, and safety.

“While parents do as much as we can to keep kids safe, we are often left with no choice but to rely on social media platforms to take the health and safety of our kids seriously — and put their well being over profit,” said Pulin Modi, campaigns director at ParentsTogether. “These powerful companies have no excuses when it comes to child safety. There are clear fixes, and the companies must take the necessary steps to protect kids from fentanyl-induced death.”

Some parents are suing Snapchat, alleging the app enabled their children’s deaths.

Families of children who died of overdose have filed a lawsuit against Snap, Inc. for what they see is a major design flaw for a product marketed to children, according to reporting from Insider. “The product design of Snap, most notably its disappearing message feature which is engineered to evade parental supervision and law enforcement's detection and acquisition of criminal evidence, was the direct and proximate cause of the untimely and tragic deaths and injuries at issue in this complaint,” the Los Angeles filing reads.

Alex’s parents, Amy and Aaron, are part of the lawsuit, and note that Alex only “met” the dealer who supplied the drugs for his fatal overdose via Snapchat. “They did not know each other in real life. The two would never have connected but for Snapchat,” the filing reads.

Snap, who disputed the accuracy of some of the claims made in the suit to Insider, notes on its website that it took action against nearly 144,000 drug-related accounts from July to December of 2021. This does not include, the New York Times reports, the 88% of drug-related content that was preemptively detected by the company’s software. Search terms associated with drug sales, like “fenta,” “xanax” among others, blocks results and redirects users to an in-app video channel with content from nonprofit groups and the CDC that warn of the dangers of prescription pills and the prevalence of counterfeit pills made with fentanyl.

Parents can take steps to help protect their children.

In addition to addressing internet safety with your children (and being aware, to the best of your ability, of which apps they’re using), the American Academy of Pediatrics (AAP) encourages parents have an honest, open dialogue with their children about the dangers of drugs starting at a young age. Early discussions might be about depictions of drug use (including cigarettes and alcohol) in media. The AAP suggests talking while doing something else (particularly something that doesn’t require eye contact, like driving or going for a walk), can feel less awkward and encourage more openness and honesty.

Be prepared, especially as kids get older, to answer questions they have with honesty and without judgement. Be sure children are aware of the use of fentanyl in pills that are not labeled, marketed, or sold as containing the drug. ParentsTogether recommends keeping naloxone (also called Narcan) at home or on your person; advice that is echoed by the CDC. Naloxone is a medication that can be either injected or administered via a nasal spray that can reverse an overdose from opioids — including heroin, fentanyl, and prescription opioid medications — when given in time. The CDC also suggests that fentanyl testing strips as an effective harm reduction strategy if you use drugs that might be laced with fentanyl.

More Like This
Can A Sunburn During Pregnancy Hurt The Baby? An OB Explains
How To Help Families Affected By The Devastating Earthquake In Turkey & Syria
Kate Winslet Shares Why She Thinks Kids Shouldn't Have Smartphones Or Be On Social Media
A Parent’s Guide To Stomach Pain In Kids
What Parents Are Talking About — Delivered Straight To Your Inbox