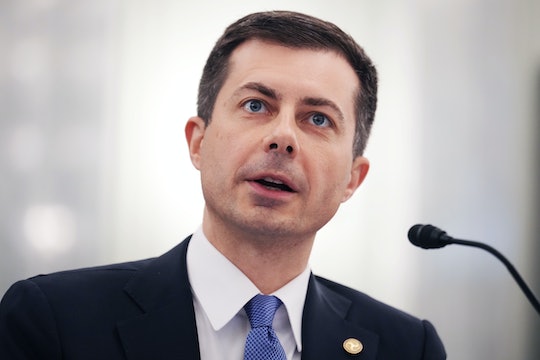 “Yeah, this is very personal for us. We've got two 9-month-old children, baby formula is a very big part of our lives.”

Even the current Secretary of Transportation of the United States, Pete Buttigieg, is contending with the current infant formula crisis in his very own home. The father of 9-month-old twins sat down for an interview with CBS News’ Face the Nation and revealed his struggle to feed his children.

“Yeah, this is very personal for us. We've got two 9-month-old children, baby formula is a very big part of our lives,” he said in the interview. Buttigieg, who announced the birth of his twins, Penelope Rose and Joseph “Gus” August via Twitter on Sept. 4, 2021, admitted that he had to scramble and do whatever necessary to nourish his kids. “And like millions of Americans, we've been rooting around stores, checking online, getting in touch with relatives in other places where they don't have the same shortages to see what they can send over,” he continued.

Buttigieg has shared that he and his family are thankfully okay now. “We figured it out. We're all set, at least for now,” he said. But not all families have been so fortunate. Two young children were recently admitted to at Le Bonheur Children's Hospital in Memphis because their baby formula, EleCare, is currently out of stock.

Amid many complex factors, such as supply-chain issues, the cause of the infant formula shortage has been hotly debated. Buttigieg, however, made it very clear that the manufacturing company, Abbot, bears the brunt of the blame. In a clip posted to Face the Nation’s Instagram account, Buttigieg told host Margaret Brennan: “fundamentally, we are here because a company was not able to guarantee that its plant was safe."

This is not the first time the former military officer, who has been married to his husband Chasten since 2018, has shared intimate details of their parenting. The couple recently experienced a terrifying health scare with their son, Gus, who was put on a ventilator but has since recovered. Buttigieg has also been open about the everyday milestones and dad growing pains that most working parents face, such as when the Transportation Secretary’s children began daycare.

No matter what side of the political aisle you’re on, it’s crucial that Buttigieg is shedding light on such a devastating issue facing so many Americans. By sharing his own family’s struggle, the new father and government official is putting a name and a face to a crisis that needs an immediate and lasting solution.

More Like This
Ketanji Brown Jackson Spoke Directly To Her Daughters In Her Powerful Opening Statement
Robb Elementary School Is Set To Be Demolished After Deadly Shooting
Can States Ban The Abortion Pill? FDA Rules May Make That Hard
Here’s How To Fight For Abortion Rights