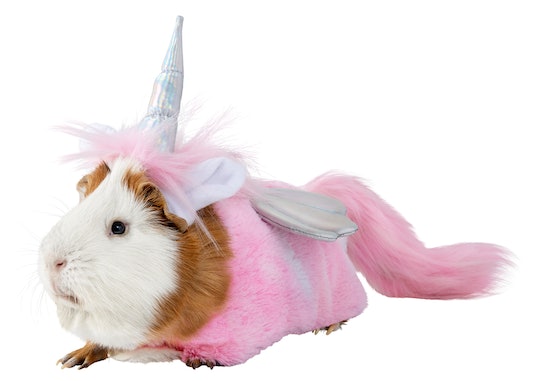 PetSmart’s New Costumes For Dogs, Cats, & Gerbils Do Not Disappoint

No trick, all treat.

Between the spooky decor, jack-o-lanterns, and piles of candy, there is a lot to love about Halloween. Still, what stands out the most about the holiday are the fun costumes, which is why the release of PetSmart’s new 2021 Halloween costumes for dogs, cats, and small animals (like guinea pigs), is so exciting. While nothing is quite as adorable as a little kid dressed up for trick-or-treating, an animal in costume is a very close second.

Every year, a new line of PetSmart Halloween costumes is released, allowing animal lovers to dress their fur babies up, somehow making them even cuter than they already are. PetSmart’s 2021 Halloween costumes hit stores and online starting August 2, and the collection doesn’t disappoint. They have all kinds of cute getups sized for either small or large pets that range from silly, to spooky, to downright scary (looking at you, creepy clown costume).

All of the costumes are made to be comfortable for your pet, but whether or not they will enthusiastically wear it depends a lot on their temperament. For instance, I once tried to dress my cat up in a costume and she laid on the floor, lifeless, playing dead until I put her out of her misery. That was several years ago, though, and the adorable options in PetSmart’s new 20201 Halloween costumes collection have me considering giving it another shot. Seriously, just look at them. They’re kind of impossible to resist.

These are just some of the many options in PetSmart’s new 2021 Halloween costumes collection. Exchanging treats for tricks has never looked so darn cute.