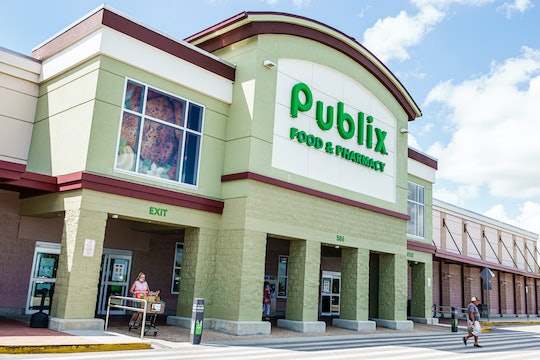 Publix Is Ringing In The New Year With These Hours

Whether you need bubbly for midnight or mimosas.

After all of the stress of Thanksgiving and Christmas, preparing for the new year can seem secondary, which means shopping can get overlooked until it’s too late. If you find yourself in this position and need to do some last-minute shopping, you might be wondering what Publix’s New Year’s Eve and New Year’s Day hours are. Thankfully, most locations will be open, but you’ll still have to do a little planning.

Whether you need to get a bottle of bubbly, some appetizers, or a frozen pizza for the family for dinner on New Year’s Eve, you can head over to Publix, as long as you do it early. Most locations will be open from 7 AM to 9 PM on New Year’s Eve, a spokesperson told Romper in an email. However, it’s important to note that 9 PM is the latest any store will be open, some may close even earlier so it’s important to give your local store a call before you head over and find yourself in an empty parking lot.

If you’re an early riser on New Year’s Day, you’re in luck because most Publix stores will be open at their usual time of 7 AM, which leaves plenty of time for you to head over and pick up everything you need to cook up a fantastic brunch for the family. For anyone who starts their New Year’s Day morning a little slower or later (or... hungover), there’s no need to worry because Publix will be open throughout the day before closing early for the holiday at 7 PM. These hours are great for breakfast and lunch, but keep the early closing time in mind if you plan on picking anything up for dinner that night. And, of course, it’s smart to call your local store ahead of time to ensure they’re open, since some locations’ hours may vary.

No matter what, though, as long as you keep an eye on the clock, you can count on Publix to have you covered on New Year’s Eve and New Year’s Day.

More Like This
20 Best Gifts For Stepmoms
19 Gifts College Grads Will Love & Actually Use
From Captions To Gifts, These Are All The Kindergarten Graduation Ideas You Need
12 Last-Minute Vacation Spots For Memorial Day