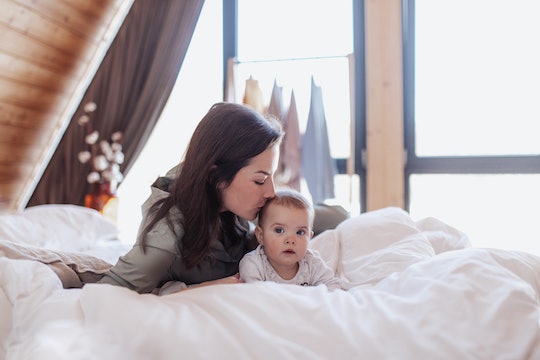 I’m A Mom Who Will Never Own A Home

I wanted my kids to have a backyard with an apple tree they planted. A swingset. Folded clothes in dressers that never moved.

How it usually starts: pre-dinner cocktails with some other parents and the conversation turns to real estate. I keep my face bland like always, empty. I sip my wine, cross my legs one way and then the other. Quiet, waiting. Like always. Someone is thinking about a new outdoor fireplace and we’re all wondering, pizza oven? Worth it? Beside the pool in the heat of the summer, it might be nice for a weeknight relaxed dinner with the kids. Someone else is doing a bathroom renovation and debating a stark concrete floor instead of tired tile. Then she pipes in, a new mom I’ve never met. She and her husband are trying to figure out how to get their renters out of their second home and having trouble.

Trouble? I ask. What kind of trouble? There. Her secret smile, her little private laugh for just us two. Well, it’s tough to get around all the rules but the rent in our area has skyrocketed and she can get so much more money with new tenants, is the thing. We all get it, right? Renters.

Here is where my cheeks go red and I stare and want to say something but the charcuterie board comes so what can I do? Pretend it’s fine. Like always.

She doesn’t know. None of them do. I’m mortgage-presenting. Homeowner-forward. I look like the kind of person who has a little place somewhere on a decent street, who looks at pizza ovens, who renovates bathrooms. I have a car, my sweater is OK. I’m a middle-aged white mom, if I’m being honest that’s it really. And so I must be part of the club. I couldn’t be a person who never owned a house. Who raised my kids living in borrowed homes. Walked around on borrowed floors, lining up our shoes in borrowed closets. All the time crossing our fingers, please let us stay.

If they knew, though. I know what happens when people know. The lights go out behind everyone’s eyes and they think to themselves, Oh great, I thought I would get to relax here, I didn’t know there would be a social awareness component of the night. They would get careful, sympathetic.

I’m mortgage-presenting. Homeowner-forward. I look like the kind of person who has a little place somewhere on a decent street, who looks at pizza ovens, who renovates bathrooms.

I’m a mom of four and I’ve never owned a home. I’ve rented 13 homes with my sons, all of them a little better than I could afford. We’ve moved and moved and moved because of people like this woman smearing goat cheese on a fig cracker, talking about buying an “income property” in the city. Because of me sometimes, too. Because I wanted more than I could afford. I wanted to be part of this club. No, actually, I wanted my boys to be part of this club.

Instead we moved, always. Not every year but it felt like every year. Apartments, townhouses, bungalows with the top floor only, and whole houses. Some had rats. Some felt haunted. Some felt wrong. Those were never the ones that broke our hearts.

It was the other ones — the ones that started to feel like ours. The little cottage at the end of a dead-end street that did not, in fact, cost too much money. The one where the landlord gave me a deal so long as I painted all of the rooms and mowed my own lawn. It was the first time in my life I was allowed to choose a paint color. To stand in the empty rooms of a house surrounded by dropcloths and quiet and sunshine, the kids at school, smoothing out paint on the walls that would house my boys. It was the first time I let it in, that feeling like maybe this house was ours. That my four boys would grow up there, come home from university to their old rooms in this little cottage at the edge of the woods, and remember growing up mostly in one place. The Christmas tree by the window, their bedroom curtains, sleepovers.

I wanted them to have a backyard with an apple tree they planted. A swingset. Folded clothes in dressers that never moved.

For four years this was true. But really it was never true. That home was sold to a nice woman who let me walk through it once after we moved out. She painted it all white or hired someone else to paint it all white. She was allowed, it was her house.

We never did get a house that was ours. We left houses that felt like ours because a landlord had a sister who needed somewhere to live so get out or they were going through a divorce so get out or I just couldn’t afford it anymore so get out.

My friends tell me all the time it’s easier, renting. I don’t have to pay for repairs, they say, because they don’t know that it’s a rare landlord who repairs anything. They don’t know that I will never own a house. That I have spent $450,000 to borrow people’s houses in 20 years and I could never save a dime. Never get that golden egg of a perfect credit score because rent, of course, does not count towards your credit score.

They don’t know what it’s like to move all of your kids’ toys and Christmas ornaments to a new house that is really an egg timer on the shelf. Your time is counting down as soon as you move in. And you lose something significant with every move. Dishes, family heirlooms, Halloween costumes, shoes.

They don’t know your kids will talk about growing up by address only. The house on 12th, the place near the beach, the apartment on 3rd. No neighborhood pals, no paper routes. Just a series of numbers that make up their childhood. They laugh about it, their futures before them, their pasts a C+ at best. But hey, it made them stronger so it’s all fine, right? This is their bond and I don’t think they know but I am standing outside the fence of their little rented house together and I’m not invited in. This is their dinner party, their final verdict about their childhood. And I guess I’m the landlord of their story.