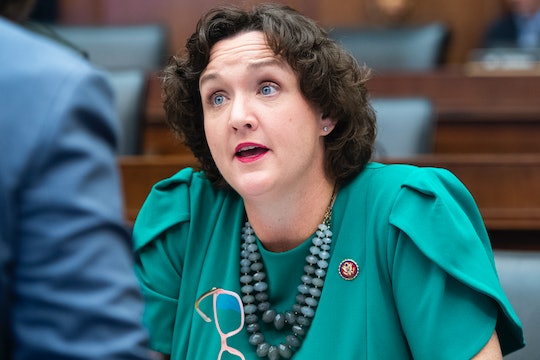 Rep. Katie Porter Comforted AOC During The Capitol Attack Like A Mom

Corroborating Rep. Alexandria Ocasio-Cortez's account of the Jan. 6 attack on the Capitol, Rep. Porter painted a harrowing picture of the day.

On Monday night, Rep. Alexandria Ocasio-Cortez took to Instagram Live to share her experience with the attack on the Capitol on Jan. 6 in an emotional, 90-minute video. In the harrowing account, Ocasio-Cortez talked about hiding in Rep. Katie Porter's office, which Porter corroborated on The Last Word with Lawrence O'Donnell. She also added her own perspective on the situation: a mom's perspective.

Porter — perhaps best known for her withering take-downs of big corporations and CEOs in the House Oversight Committee via white board — talked about Ocasio-Cortez coming into her office as a staffer explained what was going on. (In her Instagram Live video, Ocasio-Cortez explained that information about the attack was still "trickling in" and hadn't yet reached Porter.)

"Alex is really usually unfailingly polite and very personable and she wasn't even really talking to me," Porter said. Instead, the congresswoman from New York was opening all the doors and exploring all the nooks and crannies of the office to see where she was going to hide.

The fear certainly wasn't unfounded. Since becoming a national figure, AOC has been frequently subjected to all levels of insults and harassment from opponents on the right (including former President Donald Trump), up to and including credible death threats. In 2019, she tweeted, "I‘ve had mornings where I wake up & the 1st thing I do w/ my coffee is review photos of the men (it’s always men) who want to kill me."

In the MSNBC interview, Porter said there were two moments that would stay with her "especially as a mom" from that day. Recognizing the younger woman's fear, she tried to reassure Ocasio-Cortez. "I said, 'Well, don't worry, I'm a mom, I'm calm, I've got everything here we need; we could live for like a month in this office.' And she said, 'I just hope I get to be a mom. I hope I don't die today.'"

She later speaks of when Ocasio-Cortez worried about her ability to "run for her life." "I remember her saying to me 'I knew I shouldn't have worn heels how am I gonna to run.'" Porter stepped up, and with the help of a staffer found a pair of sneakers.

The situation described by Porter and Ocasio-Cortez is one of confusion and fear. "When [Capitol Police] evacuated the Canon Office Building they did not provide anywhere or any direction for those members to go shelter," Porter (whose office is in the Longworth House Office Building) said. "They didn't tell them where they could go to be safe." She explained that communication was similarly non-existent for six hours, to the point that she, Ocasio-Cortez, and a staffer sheltering in place with them were unsure whose voices they were hearing when police eventually arrived — those of police or intruders.

See the full interview below.

Porter's recalling the event through the lens of a mother speaks to how she ultimately handled the day — in typical mom fashion. She remained calm and reassuring and opened her doors to anyone who needed help, telling O'Donnell, "We were willing to let anyone come hide there with us."