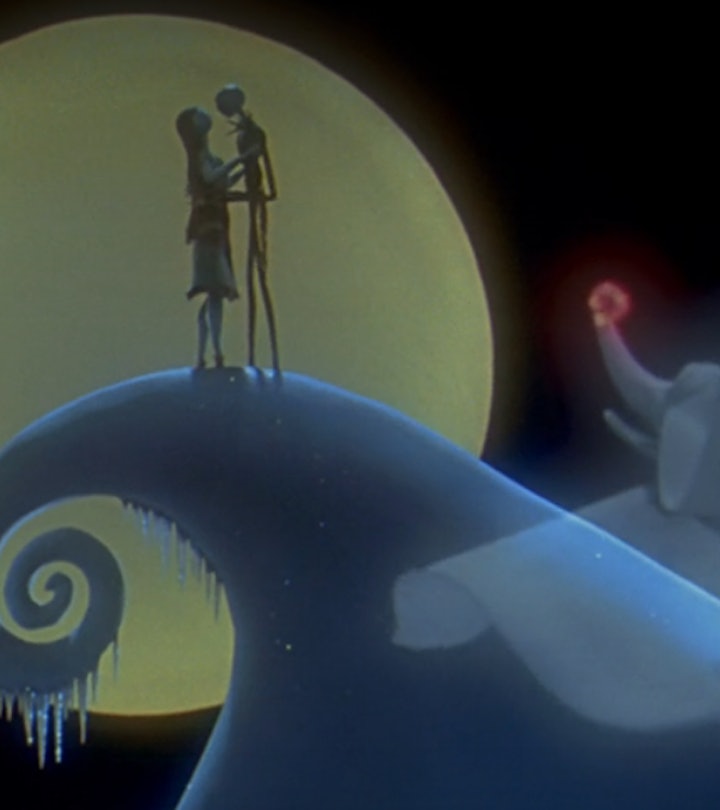 I Rewatched 'The Nightmare Before Christmas' As A Mom & ... I Have Some Thoughts

Where have I seen Jack before... ?

As a goth kid in the late-’90s/early-’00s, I was (and still am) a The Nightmare Before Christmas mega-nerd. I know all the songs, I can recite most of the movie by heart, and I love it to pieces. But as with all great movies, one’s appreciation of it changes over time. I rewatched Nightmare Before Christmas as a mom and noticed some things about this beloved, multi-holiday classic that I really hadn’t considered before. Please consider the following...

The Mayor Is Serious Mom Energy

I can’t be the only one to think that the mayor — the frazzled, pro-active organizer who goes from sunny cheerleader to wild-eyed bundle of anxiety in the blink of an eye — is every other mom they know, right? The one who wants to support everyone and get things done and is also in a constant state of worry? And his physique? Total mombod. He waddles the waddle of a woman who has been plagued by hemorrhoids since her second pregnancy 4 years ago but tries not to let her discomfort show. Or who is very worried a sneeze might catch her unawares so she’s always prepared (if you know, you know).

But his manicure is always on point. Because he knows the importance of me time... even if it’s inadequate in addressing his long-term, actual needs...

I Will Warn My Daughter Not To Be Like Sally

I’m already on record for this, but I think it bears mentioning again: Sally is a terrible role model. For decades she has been the mascot of Sad Girls everywhere. And if she were just emo AF, whatever, no big deal (though way to be the most morose person in Halloweentown, Sally). But she’s a passive aggressive stalker who literally hurls herself out a window to be with a guy who only really seems to be interested in her when he needs something from her.

Sally, stop working on his Santa suit and start working on yourself, girl.

Some Of The Residents Of Halloweentown Are Downright Terrifying

It wasn’t until I watched this movie for the first time with toddlers that I realized “Oh wow. Some of these creatures are really grotesque.” I mean, one of them is literally called “The Clown with the Tear-Away Face.” The description alone haunts my nightmares. “The One Hiding Under Your Stairs?” “The One Hiding Under Your Bed” with teeth ground sharp and eyes glowing red?

Then we have that one little kid ghoul with his eyes sewn shut. That really didn’t hit me until my daughter said “Mommy, what’s wrong with that monster’s eyes?” Like, she wasn’t scared but I was scared for her. Nightmare Before Christmas? More like Nightmare fuel.

There’s Basically No Difference Between Jack & My Son

As a kid, I always saw Jack as he’s meant to be seen in the movie – a bored, misguided genius. In my ‘20s, I became more jaded and saw in him every tall skinny pale boy whose self-pitying vision of himself fell way short of his actual abilities. (It’s not that no one understands your music, Trevor: it’s that you suck... I... may have been projected onto Jack some of the guys I had crushes on...)

But, as a mom, I see Jack pretty clearly: he’s my 10 year old. More generally, he’s little boys everywhere. Creative and enthusiastic. Good hearted and high drama. So grown up but still not as capable as he thinks he is. From constant questions (“What’s this?! What’s this?!”) to developmentally appropriate self-centeredness, to wanting to take over and be in charge of everything he sets his eyes on. Jack is charming and annoying. Self-assured and completely hapless. Remember that scene where he tries to figure out what makes Christmas Christmas, so he started dissecting teddy bears and melting candy canes and smashing decorations? That’s powerful little boy energy. Like... none of that is going to actually teach them anything, but they’re intently interested and take it very seriously.

So, with that in mind, I can understand why the residents of Halloweentown fawn on him and are constantly indulging his weird whims. How can you help but love Jack?

For real: it’s just as good as it was when I was a little kid, and I am positively baffled as to why this has not been made into a Broadway musical yet. (Raise your hand if you’d go see that? RIGHT?!) Every song is an absolute banger. And I look forward to singing those songs every day between now and December 25 as I watch this movie over and over again.

More Like This
11 Great Movies About Dads & Daughters To Watch On Father's Day
6 Takeaways From The White House’s First-Ever Parents Press Conference
Kristen Bell Just Hinted That 'Frozen 3' Is Maybe (Hopefully!) In The Works
Lyle, Lyle, Crocodile Is Heading To The Big Screen As A Musical Comedy