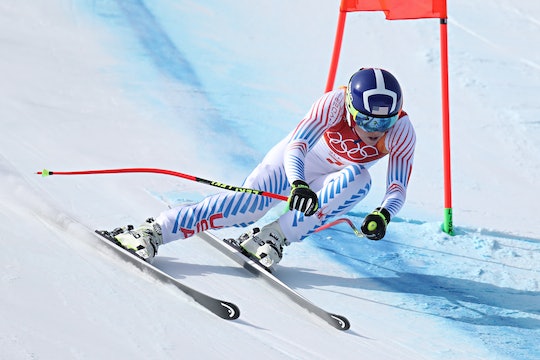 Here's The Story Behind Those Cowbells Ringing At The Winter Olympics

It has nothing to do with actual cows.

Sports fans often pass down the weirdest traditions. Detroit Redwings fans actually hurl octopi onto the ice after a home game goal, and South African soccer fans play the loud — and sometimes annoying — vuvuzela blow-horn during soccer games (think: the 2010 World Cup). When it comes to strange traditions, sports fans never seem to run out of ideas, and the Olympics aren't immune. You might catch a very specific fan ritual at the 2022 Beijing Winter Games: People ringing cowbells. Sure, it’s not as strange as hurling an octopus, but why do people ring cowbells at the Winter Olympics, anyway?

At the Winter Olympics, you’ll likely see (and hear) the cowbells mostly during outside snowy mountain events, but it’s strongly associated with skiing, in particular. It was ever present at the alpine events at the last Winter Olympics in PyeongChang, South Korea in 2018, and the noise maker will likely return this year in Beijing. But as it turns out, the use of cowbells at the Olympics isn’t just a fan tradition that suddenly appeared out of nothing — it has quite the legacy.

For all you need to know about why people ring cowbells at the Winter Olympics and why they’ll likely reappear in Beijing, read on.

Ringing Cowbells At The Winter Olympics

It turns out there is a plain and simple reason fans turn to cowbells during the Winter Games: They make noise. “Mittens don’t clap,” Elisabeth Halvorson, founder and owner of Cowbells.com, tells Romper. Halverson runs a U.S.-based cowbell company that has been licensed with the United States Olympics Committee in the past and has been supplying cowbells for the Winter Games for years. For Beijing 2022, Cowbells.com is the official licensee of the USA Ski Team and the Bobsled and Skeleton Teams.

It’s usually freezing during the Winter Games, so understandably fans are wearing gloves and mittens, which definitely don’t make much noise when you applaud. And when your favorite athletes are zooming past you down the mountain side, cowbells make it easier to cheer them on.

Halvorson explains that cowbells are used as a communication device, allowing fans to interact with athletes, and that enthusiasm helps the athletes perform. “When fans ring their cowbells, the athletes can hear the roaring of the bells from the bottom of the mountain,” Halvorson says. She points out that U.S. skiing gold medalist, Lindsey Vonn, once told TIME about how hearing cowbells makes her feel like her fans are behind her, comparing the bells to cheerleading.

So, how did this cowbell tradition come to be? Halvorson explains that in the early 1900s, when ski racing first began, many athletes were actually farmers. Their cows, along with their sheep and goats, wore cowbells in the summer — but in the winter, when the animals were put in the barn, the cowbells would just be hung up for use the next summer. Halvorson says that farmers would grab the cowbells from the barn and use them to cheer on their friends and athletes during the race. Not only did it help the fans cheer, but it probably also helped them save their vocal cords.

Cowbells Used At The Winter Olympics

The cowbells that are widely used during the Olympic Games are MOEN bells, according to Halvorson. They have rung in every Winter Olympics since they were first introduced at the 1994 Lillehammer Olympic Games in Norway. MOEN bells, first produced in Norway by Tobias Moen in 1922, are made of bullet casings from Norwegian military practice ranges. “From bullets to bells,” Halvorson says, “they are still made the same way.”

Halvorson’s company was the official supplier of the 2002 Olympic Games in Salt Lake City, Utah, and she says cowbells were the second most popular souvenir that year. The popularity of cowbell ringing is not just restricted to the Olympics — you’ll find cowbells ringing throughout many winter sports events all around the world.

Halvorson also notes that cowbells aren’t solely for winter sports. Swimming events at the Summer Olympics are known to have cowbells used in the stands, too, so the athletes can hear the noise when they come up for air — they were definitely present at the Tokyo 2020 Games. Halvorson’s company has also supplied cowbells to world-class bike races and little league baseball games, and she says many people use them for awards and trophies. For this year’s Winter Olympics, you can find officially licensed cowbells exclusively at TeamUSA.org.

So, now that you know all about the Olympics cowbell fever, you should also know the prescription — more cowbell!

This article was originally published on Feb. 7, 2018