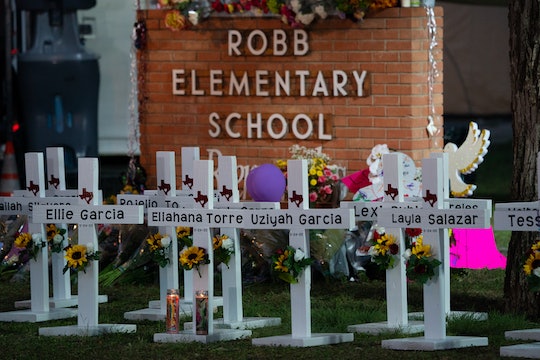 Robb Elementary School Is Set To Be Demolished After Deadly Shooting

“You can never ask a child to go back or teacher to go back in that school ever.”

Don McLaughlin, mayor of Uvalde, Texas, shared an update on Robb Elementary School roughly one month after a lone gunman entered the school and killed 21 people, including 19 young students. McLaughlin told members of the community during a council meeting that the school will be demolished, although he did not say when.

“My understanding — and I had this discussion with the superintendent — is that school will be demolished. You can never ask a child to go back or teacher to go back in that school ever," McLaughlin told residents during an emotional town council meeting.

McLaughlin didn’t provide further insight into when the building might be razed to the ground or where the approximately 600 elementary students would attend class once Robb Elementary is destroyed. But his announcement comes on the heels of a similar suggestion by President Joe Biden, shared with Texas State Sen. Roland Gutierrez during a visit to Uvalde in May, to knock the school down.

As it stands right now, Robb Elementary has been shuttered in the wake of the shooting.

The town of Uvalde is still coming to grips with the unspeakable loss of 19 children, all of whom were 9 and 10 years old, as well as two adults during the May 24 school shooting. There is grief but also anger, as reports found that police waited over an hour to enter the school while the assailant was shooting inside a classroom with an assault rifle. Teachers died protecting students in that classroom.

This would not be the first time a school was demolished after a shooting. In 2013, Sandy Hook Elementary in Newtown, Connecticut was razed to the ground after a shooting took place that left 26 people dead, including 20 children. A new school was put up in its place four years later.

Demolishing Robb Elementary won’t bring these victims back, of course. But at the very least, the survivors will never have to walk through those halls again.