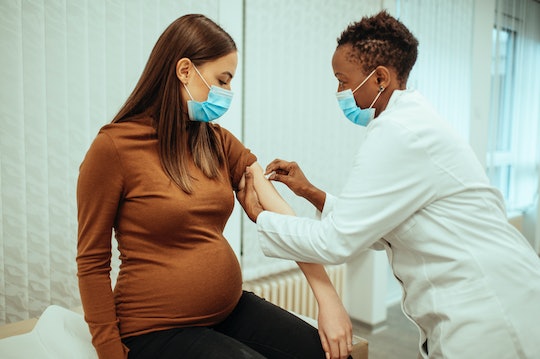 Misrepresenting the risks can cause real harm if it further dissuades people from using safe, effective forms of contraception.

On April 13, the FDA announced that the rollout of the COVID-19 vaccine by Johnson & Johnson would be temporarily paused after a small number of people experienced a rare blood clot after receiving the vaccine. A similar association has been identified with the AstraZeneca vaccine, prompting some countries to halt or scale back its use.

Almost immediately, as we do in times of distress, the masses took to social media, and a certain kind of tweet began going viral. “It’s wild that everyone is freaking out about the AZ vaccine causing blood clots (1 in 250,000 chance) and no one bats an eye at birth control having a ONE IN A THOUSAND risk of blood clots,” read one tweet that was shared more than 50,000 times.

But not all blood clots are the same.

These posts struck a chord; you’ve probably seen them popping up in your own social media feed, underscored by understandable feminist outrage and indignation that so many people who are desperate to be vaccinated are being denied something that sounds safer than their contraception. But in addition to garnering tens of thousands of likes and shares, these posts all have something else in common: they’re wrong.

It’s true that contraceptives containing estrogen increase your relative risk of a blood clot (these include Yaz, the NuvaRing, and the patch). Non-hormonal methods, like the copper IUD, or the progestin-only “mini-pill” don’t carry this risk. The numbers floating around online are mostly correct: about 1 in 1,000 women taking the highest-risk form of birth control will experience a blood clot over the course of a year. But not all blood clots are the same.

The blood clots associated with the J&J vaccine are a rare but dangerous type, different from the ones caused by birth control.

“A lot of the comparisons have just been about ‘blood clots,’ and we have to blame the media a little bit for this because it’s inappropriate to just say it’s a risk of blood clot,” explains Dr. Danielle Jones, M.D., a board-certified OB-GYN and mother of four kids. Jones is known online as Mama Doctor Jones, and her YouTube channel has 730,000 followers. She addressed the J&J vaccine versus birth control topic in a recent video.

“What they’re looking at with the vaccine is cerebral venous sinus thrombosis — CVST — which occurs when a blood clot forms in the brain. It can prevent blood from reaching certain portions of the brain, or it can hemorrhage in the brain by bursting blood vessels,” Jones explained by phone. “So this is more similar to a stroke, and it’s far more concerning than a blood clot in your leg. When you’re talking about the risk of blood clots from birth control, those are typically venous thromboembolism, or VTE, which is in the deep vein of your leg, or a pulmonary embolism, which is in your lungs. Some of those can be very life-threatening, but many can be straight-forwardly treated.”

CVST is a very rare and dangerous type of blood clot, and your risk of developing one is higher if you use estrogen-containing contraception; a Canadian study found the risk to be 7 times higher. But the risk isn’t anywhere close to 1 in 1,000; Jones estimates it at about 16 cases per million contraceptive users, or 0.016 per 1,000. That’s a very different number than the one circulating in viral posts about the relative risks, which are erasing the distinctions between the less-severe clots typically experienced by birth control users to the deadly ones seen in these rare post-vaccination events.

The vaccine was paused because, while rare, the risk wasn’t identified in trials.

But what’s just as important to understand, in Jones’ opinion, is that the vaccine wasn’t pulled because we care more about risks from vaccines than risks from birth control — it’s because this risk wasn’t identified in trials. “When you have trials that happen with tens of thousands of people, you can’t identify risks that happen one time in a million,” explains Jones. “So they pulled it to identify the risk, so that we can appropriately inform people about it, and tell doctors what symptoms to look for, even though it’s really rare.”

And unlike with birth control, where there are certain factors that can help to screen out people who are at higher risk of developing blood clots, it’s not yet understood what risk factors are associated with the J&J or AstraZeneca vaccines. Ultimately, they appear to be very safe — a risk of one in a million is incredibly low, even with something as serious as CVST. But even rare events should be investigated in order to provide people with all the facts they need to make informed decisions.

The blood clot risk in pregnancy is much higher than from birth control.

Jones also stresses that birth control is extremely safe, even though like all medications it carries some risk. Pregnancy and birth, after all, are much riskier. “Almost all of the risks from birth control are much higher in pregnancy, including the risk of blood clots and CVST,” she says. The risk of any kind of blood clot may be 1 in 1,000 on certain birth controls, but it’s twice as high while pregnant, and 6.5 times higher in the weeks after birth.

It’s tempting to ignore the risks of pregnancy, which is a “natural” state, and focus on the risks of birth control, which isn’t. Some people who worry about the risks of “artificial” hormones opt for drug-free alternatives like the pull-out method, which has a much higher failure rate. There is a similar logic present in the anti-vax movement, which argues that “natural” immunity is best. This is especially persuasive to people who feel like the risks of a vaccine are much more immediate than those of a disease like measles or polio, which they’ve never seen in real life, thanks to the success of vaccines.

It’s tempting to ignore the risks of pregnancy, which is a “natural” state, and focus on the risks of birth control, which isn’t.

But most of us, Jones points out, do know someone who has had a serious complication from pregnancy or childbirth. “People often minimize the risks and side effects of pregnancy, and how hard pregnancy can be on people, because of the fact they get a baby out of it at the end,” she says. “We aren’t allowed to talk about it the same way.”

The pill has been reformulated to be safer, and there are many non-hormonal options.

And it’s also untrue that no one cares about blood clots from birth control. The first birth control pill, released in 1960, had way higher hormone levels — up to 7.5 times as much estrogen and up to 200 times as much progestin, according to Planned Parenthood — and also a higher risk of blood clots. Since then, the pill has been reformulated to make it safer, and non-hormonal options have been developed for the many people who find hormonal birth control makes them miserable.

This doesn’t negate the truth that misogyny and racism exist in health care and impact the care of women, particularly women of colour and Indigenous women. Black women in the U.S. are 3-4 times more likely to die from pregnancy-related causes, compared to white women, and Native Americans are at 4.5 times the risk. Even Serena Williams, one of the most famous athletes in the world, had to push back against doctors who dismissed her concerns of a blood clot after giving birth to her daughter in 2017. After advocating for herself, she was diagnosed with a pulmonary embolism that could have killed her. But misogyny doesn’t explain the swift reaction to re-evaluate the J&J vaccine, considering all the CVST cases that occurred after receiving it were among women.

Misrepresenting the risks can cause real harm if it further dissuades people from using safe, effective forms of contraception.

Hormonal birth control is already too hard to access: it requires a prescription, which requires access to a doctor and the money or insurance to pay for your care. Partly as a result of these barriers, nearly half of all pregnancies in the U.S. are unplanned. Misrepresenting the risks, especially when leaving out the much higher risks of pregnancy and giving birth, can cause real harm if it further dissuade people from using safe, effective forms of contraception.

“One of the questions I’m asked the most is, ‘What’s the best type of birth control?’” says Jones. “And to that I say I’m very neutral on all of them. The best one depends on your goals, your comfort level, your risk factors and personal risk analysis, and what ultimately works for you.” Just don’t let viral social media posts factor into your decision-making, especially when they’re misinformed.

More Like This
Amid A Nationwide Shortage, Moms Are Using Social Media To Find Each Other Formula
My Nanny Showed Me How To Be A Mother
Kelly Ripa Loves A Sunday Dinner Date With Her Grown-Up Kids
Adult Gymnastics Brought Me Back To Myself