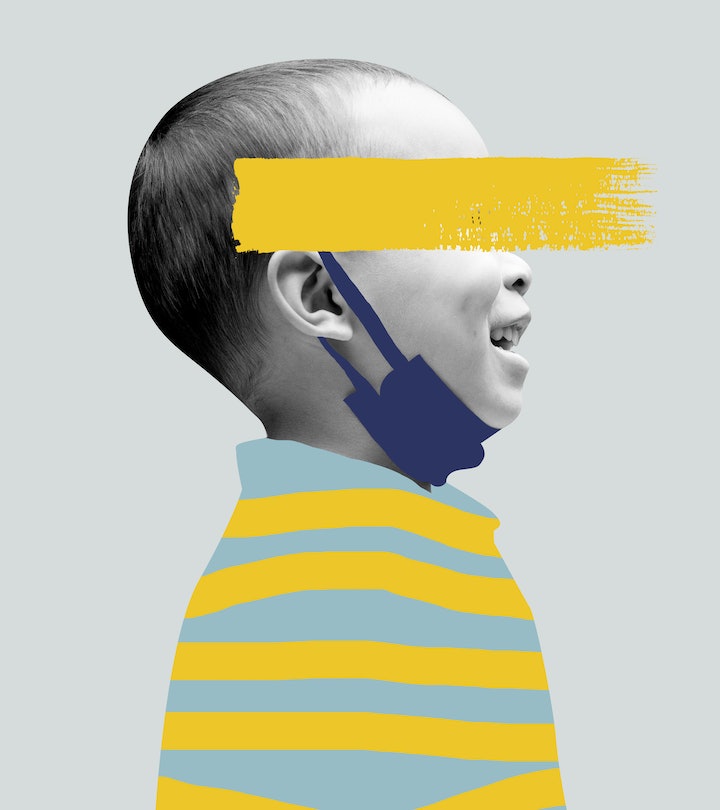 The Pandemic Made My Son An Extrovert

I don't know how much of his social butterfly-ing is simply part of his natural development and how much of it is shaped by our current circumstances. But sometimes I think he can just tell: Everyone is low-key sad.

The sound of my 4-year-old son’s voice pierces my ears as I’m loading a 45-pack box of Goldfish into the back of my car in the Costco parking lot on another in a string of cold, gray winter days. He’s standing among the broken crackers and discarded toys in the back of our family SUV, but even with his fluorescent face mask on, I can tell he’s smiling as he waves.

Who is he saying hi to now? I wondered. Before I turned around to look, I heard a response: “Hey, bud. How’s it going?”

I looked and saw, not too far across the parking lot, a man loading his own haul of bulk groceries into the back of a similar-looking sensible-family-car.

“We don’t get out much,” I shouted to the man, using an apologetic tone that I immediately felt bad about. Why do I have the urge to explain away my son’s friendliness? I thought.

“I get it. I’ve got the same thing going on over here,” the man responded. He had two young daughters with him. He told me their ages and I heard their voices drifting from the car: high pitched, happy, excitable; the same tone my own daughters (in school at the moment) use when they're getting along.

The thing was, Parking Lot Dad was probably the fourth or fifth person my son had aggressively befriended while we ran errands that day. But my son has not always been like this. Before the pandemic, he was wholly uninterested in strangers, either fixing them with the look of utter disdain that comes so easily to toddlers or shyly burying his face in my chest or shoulder. Now, on the rare occasions when we do venture out, he greets people with an almost-manic exuberance; he will not rest until they reward his tenacity with a smile or laugh. He’s also taken to grabbing three or four of his favorite toys when I tell him it’s time to get in the car. Initially I thought this was his way of staving off boredom during the ride, but I quickly realized he intended to use the toys as bait, trinkets he could wave to command attention. They were conversation starters.

I don’t know how much of his social butterfly-ing is simply part of his natural development and how much of it is shaped by our current circumstances. But sometimes I think he can just tell: Everyone is low-key sad. Maybe it hangs in the air like some kind of strange mist, invisible but stifling at times, and so he feels compelled to clear that air in some way, break that spell.

Probably, I’m giving him too much credit. He’s 4, after all, and our third child — what he wants most is attention, and his parents, sadly, are probably not giving him enough these days. As it has done for nearly everyone, the pandemic has torpedoed our work-life balance, and we’ve both struggled to keep our cool when the kids are having their 25th violent dispute of the day.

That brief flicker of warmth that comes from a parenting solidarity moment with a stranger feels more meaningful than ever these days.

Maybe, I think, with a stab of guilt, he’s just trying to make up for what he’s not getting at home. He knows he’s cute, that even the most stern-faced adults will engage with him when he so unabashedly seeks them out. He knows that the teacher in the drop-off loop at our elementary school will comment on the Spider-Man toy he’s waving out the window after she’s done aiming her temperature scanner at my daughters’ foreheads.

The irony is I have an intense distaste for interacting with strangers and even common acquaintances and have almost no interest in making new friends. The first time I put on a mask to go grocery shopping, I reveled in the increased level of anonymity it imparted. I had the same rush of pleasure as I did when I wore maternity jeans for the first time, pulling the elastic panel over my torso and wondering where they had been all my life.

Living in New York has always seemed to be a good fit for this aspect of my personality. I’ve always found it jarring when we visit my husband’s family in Florida. “Why do they always want to chat with you and know about your life?” I’ve said to my husband, probably with an eye roll on the return to the car from some public encounter with friendly Southern strangers. “We’ll never see each other again. What’s the point?”

But I think I know the answer to that last part now. I’ll probably never see Parking Lot Dad again. Our interaction was so brief, and separated as we were by at least triple the recommended social distance, with masks still on, we surely won’t recognize each other even if we do. But as we drove away, my car packed full of food, and a solitary bottle of red wine I’d purchased to drink by myself over the weekend (hopefully over a Zoom call with some college friends to make it feel less pathetic), I realized, to my inner introvert’s surprise, that I had actually enjoyed our short exchange. That brief flicker of warmth that comes from a parenting solidarity moment with a stranger feels more meaningful than ever these days.

I had started the day mildly annoyed with myself for not scheduling my life better and for needing to go grocery shopping on a day when my son was home from school. But by the time we returned home, I was glad he’d been with me.