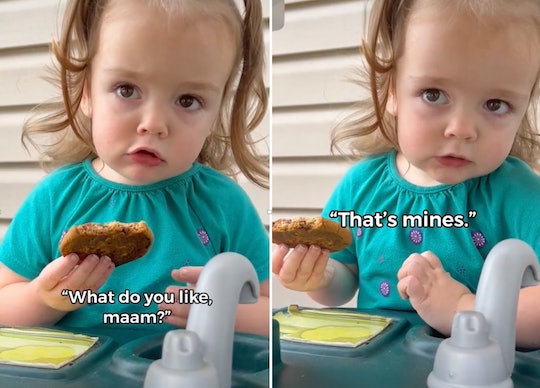 It started the way most things do: with a search for some peace and quiet. Sarah Dart, a mom of four, just wanted some one-on-one time with her youngest daughter, Willow. She got it — and, to her absolute delight, accidentally captured the most adorable transformation of her little girl going into full diner mode. The resulting “Willow’s Diner” videos quickly went viral on TikTok. People can’t get enough of Willow’s sassy-and-sweet personality, as she serves up the cutest looks with funny catchphrases time and time again.

“I think the pretend play just came up organically,” Dart tells Romper about Willow and her adorable outside diner. We’re still LOL-ing over this one, when Dart asks Willow for the cookie she’s eating, and she decisively responds, “No. That’s mines” before offering her mom broccoli instead.

“We’ve had the play kitchen for over six years so it has been a staple of the house and she’s seen her older siblings play with it her whole life,” Dart continues. “We actually almost got rid of it during a move over the summer because it wasn’t getting used too much! I’m so glad we held onto it now since she suddenly took a liking to it the last few months.”

Her favorite foods to serve “changes a lot,” according to Dart. But she does know the one essential her mama needs. “She looks around and picks different things every day. She usually offers me coffee though,” Dart says. Hey, all diner owners know the importance of caffeine! As far as real food to eat and not pretend, Dart says, “She loves apples and waffles.. and cookies of course!”

Now, Willow even has an adorable pink diner costume, which she wore in Dart’s latest video. Willow gives her mom an apple with a worm in it, and when she tries to complain, Willow says, “Go sit, ma’am.” She definitely worked at a diner in her past life because she seems utterly confident in the role. Especially because she actually doesn’t get a chance to go to real-life diners.

“We actually don’t go to restaurants ever!” Dart tells Romper. “She is the youngest of four and our family is waaaay too chaotic for restaurants. So she definitely doesn’t observe servers in the wild.”

It just comes naturally for the little girl! Filming does too, according to Dart, who revealed that she’s always filming their play session outside — as she should! Capturing Willow’s delightful expressions and precious catchphrases is basically a public service.

“The way her kitchen is laid out it’s easy for me to rest the phone in my hand and maintain eye contact and stay engaged with her,” Dart explains. “I pretty much film our entire play sessions outside, but I certainly don’t have a camera in her face all day. I only record outside because it’s the only time we have zero background noise (other than the birds!) because again… chaotic big family. I don’t know what we’re going to do in winter!” Don’t worry, Willow will probably have a solution!

Willow’s older siblings enjoy watching her diner videos, too. Dart says they “love her videos” and are so proud of her. “They keep saying their baby sister is famous,” she says, adding, “She’s very loved by them and they’re always laughing at the funny things she says, so they’re really stoked that I’m making these videos. Every day they ask if I’ve made a new one.” How cute is that?

On her breaks from the diner, Willow “absolutely LOVES to play dollhouse,” Dart tells Romper. “When she gets in a groove she will sit by herself narrating whole stories at her dollhouse for an hour. It’s so fun to listen to.” That sounds wildly entertaining — but did you expect anything less from this cutie? She fully commits to each role in her pretend play.

“She also loves to play doctor,” adds Dart. “For some reason it’s always a musical and she has to sing every line. Not sure why! She sings to herself constantly and dances a lot. Art is always a hit too.”

Willow is precious (and hilarious!), and she even has her own merch. You can shop cute stickers and magnets designed by Dart that include some of Willow’s most adorable catchphrases. There’s one with text that says, “What do you like maam?” with a picture of Willow holding a cookie, and one of Willow giving her mom the side-eye while holding broccoli. We’re going to need all of them!

More Like This
6-Year-Old Boy Has Zero Regrets After Ordering $1,000 Worth Of Food On Grubhub
Reddit Backs Mom Who Got Scolded By Teacher For Not Inviting 30 Kids To Birthday Party
Parents Have Thoughts After Court Orders Nursing Mom To Use Bottle In Custody Dispute
Jacinda Ardern No Longer Has “Enough In The Tank” & Moms Know Exactly What She Means
What Parents Are Talking About — Delivered Straight To Your Inbox