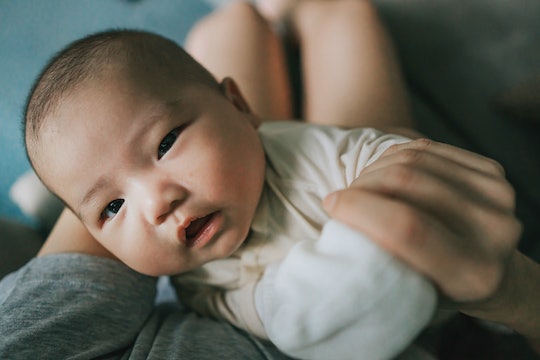 Did You Choose One Of The Most Popular Baby Names Of 2021? We Have The List!

The reigning champs have held steady for at least three years in a row...

What’s in a name? Well, kind of a lot. A name can be a way to celebrate family history, culture, or represent your parents’ hopes and dreams for what you will be as you grow. It is, after all, one of the very first things they give you. And if you’re a big old nerd about baby names, you probably know that the Social Security Administration (SSA) recently released its list of the most popular baby names of 2021. (If you’re not a baby name nerd, know that this is kind of like our NFL draft.) What names held steady, rose up, or fell out of favor? And where does your child’s name (or, more importantly, the name you’re considering giving to your baby) fall on the list? Here’s what you need to know based on more than 100 years of data available from the SSA.

Once again, Liam and Olivia top the charts.

... at least to name nerds who follow these sort of things. With the exception of “Theodore,” (which surpassed Alexander, now at #13, for a place in the top 10), all the other names were on this list in 2020, often in the same order. “James” and “William” flip-flopped on the boys list, and there was a little rearranging between the #3 through #6 spots for girls, but other than that it’s looking pretty steady. One notable change is that the perpetually popular “William” is out of the top 5 for the first time since 2008. (Another fun fact: according to the SSA, at its least popular, “William” was the 20th most popular boys name in the country, but it’s never been in the #1 spot.)

Other things factor into the popularity of a name as well. For example, while names tend to be generally popular across the board, exactly how popular can vary quite a bit from state to state.

While the state-by-state data on the popularity of baby names isn’t out yet, we can still see this in action from data from 2020. When you take a look at the five most popular names in every state, you mostly see names from the national top 10, their spots can vary considerably. Moreover, a name that’s super popular one place may hardly be a blip on another’s state’s radar. “Anthony,” for example, is a top 5 name in Delaware that only ranks #43 nationally. “Hazel” is the 28th most popular name nationally, but in North Dakota it’s #4.

That name might not be as unique as you think...

It’s understandable to try to steer away from names you perceive as too popular, but doing so might actually backfire. For example, at #32, “Nova” ranks as far more popular than the more traditional “Rose” (#116). “Maverick” (#47) is, it would seem, less edgy than “Stephen” (#341). So if popularity is something you want to steer clear from when choosing a name, you might want to look at the data before you make assumptions! But...

If you’re worried your baby name is “getting too popular,” consider this.

To fully grasp this next point, we have to journey back to America in 1900! I hope you're vaccinated because, let me tell you, infectious diseases are everywhere. Know what else is everywhere? Babies named “John” and “Mary.” In fact, per data from the SSA, 6% of newborn boys were named “John” and 5% of baby girls were named “Mary.”

But over time, popular names have become less and less so as people realize there are other names out there to choose from (and the country becomes more diverse). Even at the height of “Jennifer” in 1984 we’re already down to just under 3% of girls (though we understand your high school friends Jen, Jenny, Jennifer B. and Jennifer R. will never believe this).