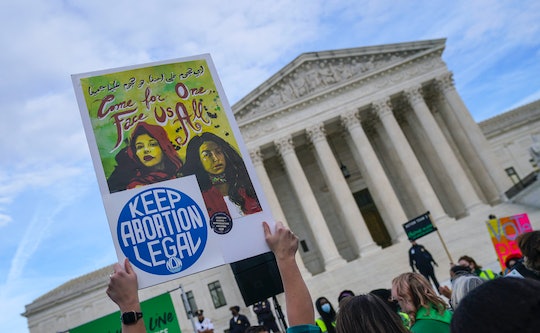 “Abortion rights are being decided by a committee of nine where the majority of members have never had a uterus.”

The Supreme Court continues to hear arguments in the case of Dobbs v. Jackson Women’s Health, a case that could significantly jeopardize the future of abortion rights in the United States. Across the country, people have taken to Twitter to vent their frustrations about what a massive step backward this would be for reproductive right that were initially put in place almost 50 years ago when Roe v. Wade was decided.

The only remaining abortion clinic in Mississippi, Jackson’s Women Health, is at the center of the case. The women’s health clinic is challenging Mississippi’s law banning abortions after 15 weeks of pregnancy. NARAL Pro-Choice America notes that banning abortions at 15 weeks gestation is “well ahead of where medical providers” consider fetal viability.

Dobbs v. Jackson Women’s Health may be on the brink of a much larger change to abortion access if the Supreme Court’s 6-3 conservative majority decides against the clinic. In 1973, Roe v. Wade determined that states cannot ban abortion before fetal viability, which the WHO notes is “possible after 20 weeks.” If the Supreme Court decides against Jackson Women’s Health Clinic, this decision could allow other states to follow suit. And since some states have made it clear they would like to curtail abortion rights, pregnant people might have to travel far to find access. Creating great swathes of the country where abortion might not be made available to them.

As arguments continue, here are some of the most powerful, spot-on tweets shared thus far.

Amy Coney Barrett’s Adoption Solution Is Not A Solution

The newest justice on the Supreme Court, Justice Amy Coney Barrett, ignited fury on Twitter when she suggested that giving a baby up for adoption at birth under the protection of “Safe Haven” law (which allows parents to relinquish an unharmed baby to become a ward of the state) might negate or reduce the need for abortion access.

“As you and many of your amici focus on the ways in which forced parenting, forced motherhood would hinder women’s access to the workplace, and to equal opportunities, it’s also focused on the consequences of parenting and the obligations of motherhood that flow from pregnancy — why don’t the safe haven laws take care of that problem?” Coney Barrett reportedly argued, per Slate.

Stephanie Land, author of the book Maid, pointed out the flaws in Coney Barrett’s ill-conceived logic and expressed outrage on Twitter. “I’m still just out of my mind with anger at ACB’s comments today,” Landed tweeted. “You want people to carry a pregnancy to term, without funds for maternal health care, GIVE BIRTH without funds, leave the newborn at a ‘Safe Haven,’ and just…go back to work without maternal leave to recover?”

Amy Coney Barrett has people upset over her adoption comments.

Editor Kaili Joy Gray noted the hypocrisy of Coney Barrett’s oversimplification of the problem, writing on Twitter: “Barrett: If you can give up your baby when it's born, why does forcing a woman to go through pregnancy affect her life at all?”

Twitter user @dontlickchalk said they’d had been through the foster care system and wrote, “I'd like to remind Amy Coney Barrett that kids placed in foster care, are in there for about 3-5 years before being adopted, if they ever are. For me, it was seven. Never mind the psychological damages inflicted on the child because of it. You know better, right?”

The foster care system is not better than abortion.

Ilyse Hogue, who served as president of NARAL Pro-Choice America, tweeted that the potential overturning of Roe v. Wade is about more than abortion access. “Reminder that Federalist Society specifically chose abortion as a litmus test for their aspiring judges because they knew it was a proxy for a regressive and oppressive worldview writ large. This argument is not only about abortion access; it's about control.”

Abortion is a woman’s right to choose what happens to her body.

It’s about more than abortion.

Mississippi Attorney General Lynn Fitch has run her career on a platform that women need to be empowered to become mothers rather than have access to safe abortions. And many on Twitter really do not agree. “Good morning to everyone who disagrees with Mississippi's AG Lynn Fitch, who believes NOT giving women access to abortion empowers them and let's them explore the career of motherhood. This it the basis of her argument at SCOTUS. F**k her,” @AmyAThatcher tweeted.

Women are empowered by the right to choose.

Another noted that Fitch might not be in a position to tell women what to do with their bodies. “Fitch says abortion restrictions ‘empower’ women by forcing them to choose both parenthood & careers,” @malinablue tweeted. “Her argument can be summed up as ‘sure, I had a rich daddy who sent me to rich schools & financed my campaign so I could buy a nanny and best daycare, but doesn't everybody?’”

Not every pregnant woman has support.

The majority of the justices deciding on a woman’s right to abortion access are men, a fact not lost on Twitter users like this one, “Abortion rights are being decided by a committee of nine where the majority of members have never had a uterus. This is where we are at in 2021.”

Another wrote, “If men had to sideline their careers, drop out of school, stay with unsuitable + often abusive partners, or deal with public judgment when they seek government aid as a single parent, we wouldn’t still be discussing abortion rights. It’d be unchallenged law.”

More Like This
Georgia Says A Fetus Is A Dependent For Tax Returns At 6 Weeks
Nebraska Authorities Used Teen’s Facebook DMs To Charge Her & Her Mom In An Abortion Case
Breonna Taylor's Mom Spoke Out About The Four Officers Arrested In Her Daughter’s Death
Dr. Jill Biden Just Delivered Some Frank, But Powerful, Advice On Motherhood