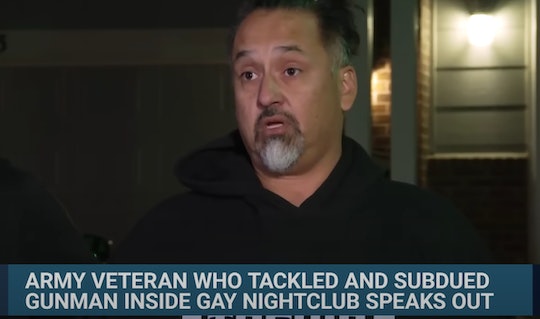 “I just know that I got into mode and I needed to save my family. That family was, at that time, everybody in that room.”

On Saturday night just before midnight, a 22-year-old gunman entered Club Q, an LGBTQ+ nightclub in Colorado Springs, and killed five people. The gunman could have killed far more people in the busy nightclub, according to police, if two patrons had not stepped in and subdued him. One of those heroes was army veteran Richard Fierro, who was at the club with his family to enjoy a drag show for the evening.

Fierro, who served 15 years in the military including deployments to Afghanistan and Iraq, told The New York Times that he went into “combat mode” when the gunman opened fire. Particularly since the veteran was there with his wife, daughter, and family friends to enjoy a drag show, his very first, where one of his daughter’s friends, her junior prom date, was performing. And it was an experience he was enjoying before the gunman opened fire on the room full of innocent people. “These kids want to live that way, want to have a good time, have at it,” he told The New York Times about the event he was enjoying with his family. “I’m happy about it because that is what I fought for, so they can do whatever the hell they want.”

When the gunman opened fire, however, Fierro’s instincts to protect kicked in. “I don’t know exactly what I did, I just went into combat mode,” Fierro, 45, added. “I just know I have to kill this guy before he kills us.”

“I just know that I got into mode and I needed to save my family,” Fierro said in another interview with CBS News. “That family was, at that time, everybody in that room ... I wasn't thinking. I just ran over there. [I thought], 'I've got to kill this guy. He's going to kill my kid. He's going to kill my wife.' ... It's just the reflex: ‘Go. Go to the fight. Stop the action. Stop the activity. Don't let no one get hurt.’”

Fierro’s bravery in subduing the gunman, who killed five people and injured at least 18 others before being detained, was lauded by Colorado Springs Police Chief Adrian Vasquez, who credited Fierro and one other patron with preventing further violence. “We owe them a great debt of thanks,” Vasquez told CNN.

The other person who stepped in to stop the attack was reportedly a trans woman, according to Club Q performer Del Lusional. “The one who saved my life and stomped the shooter’s face in was not a drag queen, she is a trans woman,” the performer shared on Twitter.

Fierro’s presence at a drag show as a veteran flies in the face of right wing rhetoric implying that drag shows and LGBTQ+ nightclubs like Club Q are somehow dangerous or fringe or inappropriate. As Fierro said himself, “that is what I fought for.”

More Like This
Florida Teachers With “Unvetted” Classroom Books Could Face Felony Charges
Michigan Right-Wing Group Wants To Erase LGBTQ+ Sex Ed
How To Help Families Affected By The Devastating Earthquake In Turkey & Syria
Teacher Shot By 6-Year-Old Student Told School He Had A Gun, Was Told To "Wait"
What Parents Are Talking About — Delivered Straight To Your Inbox