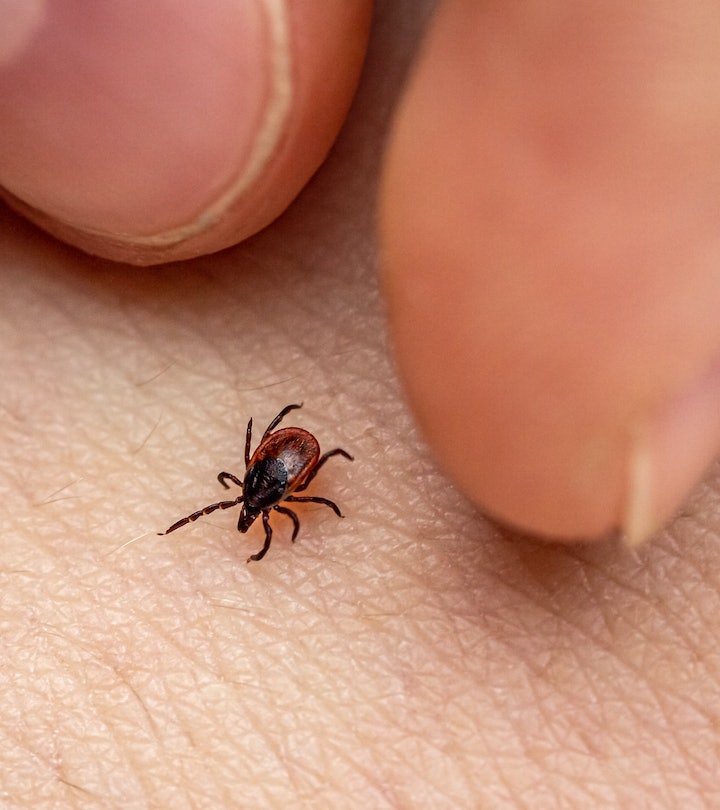 Tick's Head Gets Stuck Under Your Skin When You Were Pulling It Out?

Here’s what you should do.

Spring and summertime mean going outside, which is a good thing, but going outside means bugs, which are not such a good thing, especially if the bug in question is a tick. Ticks carry Lyme disease and other dangerous pathogens, as you’re most likely aware, so if you see a tick on your kid you know it’s got to go immediately. Unfortunately, tick removal is trickier than it sounds. What should you do if a tick’s head gets stuck under your skin when you’re trying to pull it out? Experts break down the proper steps to take.

How do you remove a tick so the head doesn’t get stuck?

"Of course, it would be great to avoid this issue from the beginning by using the correct technique to remove a tick, which involves using a set of tweezers carefully positioned between the skin and the tick's mouth," Jo Ellis, Director of Education and Outreach with the Bay Area Lyme Foundation, tells Romper. The tweezer method is also endorsed by the Centers For Disease Control & Prevention (CDC):

The CDC warns against such methods as "'painting' the tick with nail polish or petroleum jelly, or using heat to make the tick detach from the skin," as your goal is to get the tick out as quickly as possible instead of waiting for it to leave on its own time. (There is another fast option not involving tweezers known as the “dizzy tick” method which looks like it might take some skill to master, but there’s no risk of the head getting stuck because the tick backs out on its own.)

What should you do if the tick’s head gets stuck?

Whichever method of removal you choose, it can be tricky to get the little buggers out. Some ticks are tiny and impossible to see. Other ticks (if they've been hanging out for awhile at the blood buffet) are big and bloated and exasperatingly easy to accidentally pop. And still others just refuse to come out in one piece. Then what are you supposed to do?

"If the tick is incorrectly removed and the tick's 'head' gets stuck in your child's skin, don't panic," says Ellis.

"Find a pair of pointy-tipped tweezers, and gently dislodge the tick's mouthparts. Be sure to thoroughly wash the area with rubbing alcohol before and with soap and water after pulling the head out. If you find that you are unable to remove the head and mouthparts yourself, we recommend taking your child to the doctor's office to have the remainder of the tick removed by a healthcare professional. Be sure to monitor the bite site and your child's health after removal for any symptoms, changes in behavior, and/or the appearance of a rash." It's also important to note that not everyone gets the trademark rash, Ellis adds.

After removing any "large" pieces of the head and cleaning the skin, you can use a clean needle to scrape off smaller pieces; still, if some remain, the skin will "slowly heal and shed it" (so at least it won't be in there forever), advises The Seattle Children's Hospital. If, however, a large piece of the head remains, the hospital recommends calling your child's doctor. You should also follow up with a professional if a fever or rash develops in the next four weeks, the bite starts to look infected, or your child shows any other new or strange symptoms.

What are the symptoms to watch for after a tick bite?

As noted above, not everyone who contracts Lyme disease presents with the classic bull’s eye-shaped rash, which can develop after a delay of three to 30 days, according to the CDC. Other symptoms to watch for include:

One study found that “children may present with insidious onset of elevated intracranial pressure during acute disseminated Lyme disease; prompt diagnosis and treatment of this condition is important to prevent loss of vision,” reported PubMed. See your doctor if your child is displaying any of the above symptoms, or just feels “off.” As for treatment, the same study found that “diagnosis and management of Lyme disease in children is similar to that in adults with a few clinically relevant exceptions.” Lyme disease is usually treated with antibiotics, as Johns Hopkins Medicine reported, and “early stage Lyme disease is more easily cured with antibiotics than late-stage disease.” Possible complications include the development of post-Lyme disease syndrome (PLDS), which means symptoms last longer than six months and include fatigue, ongoing muscle and nerve pain, and problems with memory.

When it comes to ticks, prevention is key (even if it's not foolproof).

Jo Ellis, Director of Education and Outreach with the Bay Area Lyme Foundation

This article was originally published on June 20, 2018