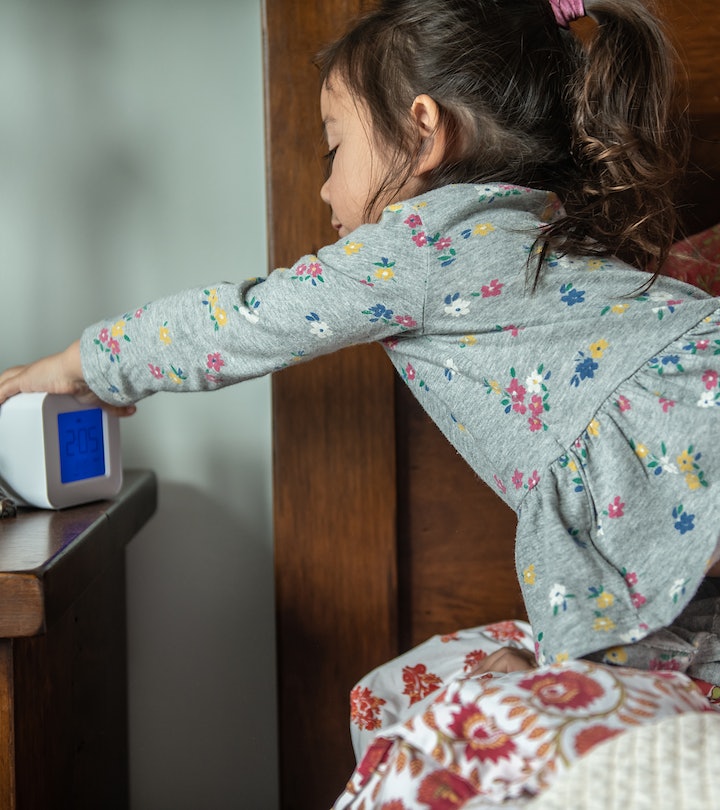 Ready Or Not, Daylight Saving Time Is Still Happening In 2022

But there's a good reason you're confused this year.

It’s up there with mention of “lice” or the realization that your baby just had a blowout and you forgot to restock your diaper bag. The very mention of it instills a deep, unavoidable dread in the hearts of parents everywhere: “Don’t forget to turn your clocks back this week!” Yes, the bi-annual changing of clocks, nay, the fabric of time itself is torturous for those among us with kids on a schedule. But... wait. Didn’t we hear something earlier this year about the end of time-changes? Is Daylight Saving Time happening in 2022? Here’s what you need to know about the state of DST.

Will we turn clocks back in fall 2022? Are we losing an hour of sleep this year?

Yes, you have to set your clocks back this year. As per tradition, DST will end on the first Sunday of November, which this year falls on Nov. 6 — at 2 a.m. The clock on your phone and other internet connected devices will change on their own, but the clocks on the microwave, stove, and other, more analog devices will need to be changed manually.

What states are getting rid of Daylight Saving Time 2022?

None of them, but more on that in a minute. For now, what you need to know is that with the exceptions of Hawaii, Arizona (not including the Navajo Nation, majority of which is located within the borders of Arizona) and US territories including American Samoa, Guam, the Northern Mariana Islands, Puerto Rico, and the U.S. Virgin Islands, every state observes DST and we’re stuck with (at least) another year of changing clocks.

“But I could have sworn I heard that Congress passed a law that eliminated this devilish time warp!” you may say to yourself. Your confusion is completely understandable: allow me to explain. In March of this year, the Senate passed the Sunshine Protection Act, which was introduced by Sen. Marco Rubio (R-FL) in 2018 and again in 2021, by unanimous consent. This legislation would make DST permanent.

What does permanent Daylight Saving mean?

Right now, the US (again, minus those rebels Arizona, Hawaii, and various territories) spends part of the year (roughly November to March) in “Standard Time.” The remainder of the year (from March to November) we observe “Daylight Saving Time,” which gives us more sunshine in the late afternoon and evening. So, essentially, we’d get more P.M. sun (and, as a result, later sunrises) all year long.

“We’re doing this back and forth of clock changing for about 16 weeks of Standard Time a year,” Rubio said on the Senate floor while discussing his legislation “I think the majority of the American people’s preference is just to stop the back and forth changing.” He went on to note that time changes were associated with more car accidents, heart attacks, and crime.

“I know this is not the most important issue confronting America, but it's one of those issues where there's a lot of agreement,” Rubio added. “If we can get this passed, we don't have to do this stupidity anymore.”

But let’s hold up for a minute. As Schoolhouse Rock taught us via “I’m Just A Bill,” the Senate alone does not a law make. The Sunshine Protection Act has still not made it to the U.S. House. And even if it passes the House, it would still require President Joe Biden’s signature to become a law. Furthermore, even if somehow all that got done in the next couple weeks, the law would not go into effect until Nov. 5, 2023 — aka two clock changes from now.

Americans have observed DST since at least 1966.

Time as we know it is actually, in the grand scheme of the world, relatively new. Did you know time zones weren’t even a thing in the United States until railroad companies made them a thing in 1883? As the interconnectedness of the country became more and more apparent, the federal government enacted the Standard Time Act in 1918, which codified time zones and included a nationwide DST model based on European laws that hoped to save on energy costs during World War I.

After that, the issue of DST was a bit spotty — some states had it, some states didn’t, and when it began and ended was their call. In 1966, the Uniform Time Act standardized when DST would begin and end and forbid states from observation of permanent DST. (Little rebels Arizona and Hawaii opted to go for Standard Time throughout the year, which was permitted by the new law, if contrary.)

Since 2015, however, Reuters reports that 30 states have introduced legislation to make DST permanent, but only if neighboring states do the same. (Which makes sense, since you’d have to standardized times for things like trains and buses.)

The issue remains contentious, even among experts.

While many Americans have praised the institution of permanent DST, other institutions aren’t so sure. The American Academy of Sleep Medicine agrees that the back and forth is absurd, but supports a Standard Time only model. “Permanent, year-round standard time is the best choice to most closely match our circadian sleep-wake cycle,” Dr. M. Adeel Rishi, vice chair of the AASM Public Safety Committee, said in a statement. “Daylight saving time results in more darkness in the morning and more light in the evening, disrupting the body’s natural rhythm.”

Others cite the fact that this is not the first time the federal government has attempted this change: President Richard Nixon established a permanent DST in 1974 in response to the 1973 oil crisis in an effort to lower energy costs. While initially popular, people ultimately did not enjoy the reality of such dark mornings, particularly children having to go to school. (And, “fun” fact: permanent DST actually increases energy costs, per the Center for Economic Policy Research!)

We don’t know what the fate of the Sunshine Preservation Act will be moving forward, but for now: fall behind on Nov. 6, people.