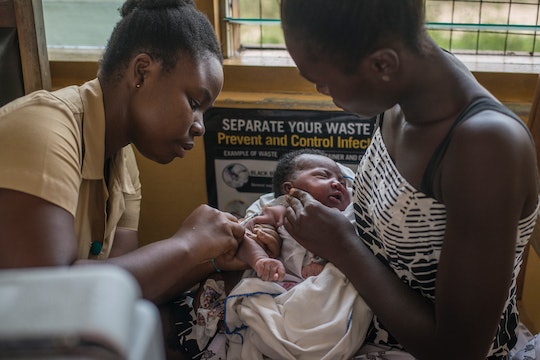 The W.H.O. Has Approved A Malaria Vaccine For Kids In Historic First

More than 260,000 African children under the age of 5 die from malaria each year.

In a historic first, the World Health Organization (WHO) recommended widespread use of the first-ever vaccine designed to prevent malaria on Wednesday, noting it could save the lives of tens of thousands of children each year. The WHO specifically recommended the vaccine for children living in sub-Saharan Africa and other at-risk regions where transmission of malaria, a disease caused by the Plasmodium parasite and spread through the bites of infected mosquitoes, remains moderate to high.

“This is a historic moment,” WHO Director-General Dr. Tedros Adhanom Ghebreyesus said in a statement released by the agency Wednesday. “The long-awaited malaria vaccine for children is a breakthrough for science, child health, and malaria control. Using this vaccine on top of existing tools to prevent malaria could save tens of thousands of young lives each year.”

Millions of people contract malaria each year, and many of them are young children. According to UNICEF, 229 million cases of malaria were reported across the globe in 2019 with more than 400,000 of those cases resulting in death. Children under the age of 5 made up 67% or 274,000 of malaria deaths reported in 2019. That averages out to roughly 750 pediatric deaths per day in 2019.

According to WHO, malaria remains a primary cause of both childhood illness and death in sub-Saharan Africa. “For centuries, malaria has stalked sub-Saharan Africa, causing immense personal suffering,” WHO Regional Director for Africa Dr. Matshidiso Moeti said in a statement released Wednesday. “We have long hoped for an effective malaria vaccine and now for the first time ever, we have such a vaccine recommended for widespread use.”

To help prevent a malaria infection, the WHO has recommended children age 5 months and older who live in regions with moderate to high transmission of the disease receive a schedule of 4 doses of the RTS,S/AS01 malaria vaccine. According to the New York Times, the RTS,S/AS01 malaria vaccine, which also goes by the name Mosquirix, is the first-ever vaccine to be developed against a parasitic disease. Unfortunately, the protection the vaccine offers is neither long-lasting nor significant.

According to NBC News, trials and real-life pilot programs carried out in Ghana, Kenya, and Malawi have shown Mosquirix is roughly 30% effective in preventing fatal cases of severe malaria and protection fades months after injection.

Still, after years of stalled progress in efforts to curb transmission of malaria, health experts are hoping use of the vaccine will provide a much-needed boost to both limiting the disease’s spread and preventing deaths, especially among children.

“Today’s recommendation offers a glimmer of hope for the continent which shoulders the heaviest burden of the disease,” Moeti said. “We expect many more African children to be protected from malaria and grow into healthy adults.”

More Like This
The Covid Vaccine For Kids Under 5 Has Been Sent To The FDA For Review
Should Parents Consider Delaying Covid Vaccines Until Closer To School Starting?
Way Too Many Parents Have Zero Plans to Talk About Sex With Their Kids
A New 3-Digit Mental Health Hotline Is Launching Soon