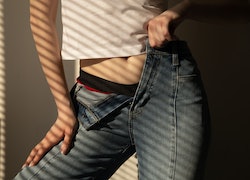 Here's Why Your Vagina Might Have A Metallic Scent To It

Honestly, it's probably nothing to worry about.

Your vagina is a complex thoroughfare. It's a world unto itself and yet somehow intimately connected to the rest of your body in ways science is only now beginning to understand. In short, it's amazing. But sometimes, things go amiss. Discharge happens, and sometimes your vagina may smell metallic or a little different, like copper pennies, leading you to wonder if you have some kind of infection. But remember — your vagina is complex. So a different scent doesn't always mean something's wrong.

“The two most common reasons for a metallic odor are both normal … blood and semen," OB-GYN Gil Weiss tells Romper. “Blood contains molecules of hemoglobin, which all incorporates iron. It is precisely this iron which contributes to metallic smell. Bleeding during your menstruation or after intercourse can contribute to this odor.”

Dr. Peter Rizk, OB-GYN and consultant for Fairhaven Health says, “You may not realize it but your vaginal pH actually fluctuates through your cycle, that‘s why you most likely experience a change in odor and wetness (or dryness) as the month progresses." Rizk says that your neutral vaginal pH is about 4.5 and blood has a pH of 7.4, so during your period, your vaginal pH can become elevated by the menstrual fluids, giving you a different scent.

Nurse midwife Emmie Clarke of British Columbia tells Romper that if a patient comes in and asks, "Why does my vagina smell metallic?" it's almost always because their period is about to come, or it just left. "It can also be because you've given birth, or you're experiencing ovulation spotting."

Basically, your vagina can smell like pennies any time blood is involved, and let's be honest, it's your vagina — there will be blood. Your vagina contains an intricately woven balance of flora and bacteria which serve a multitude of purposes. Not only does it keep the tender tissues healthy and lubricated, it also serves to protect your body from harmful bacteria that can make their way into your vaginal channel on a daily basis, according to the Annual Review of Microbiology.

There's harmony in the everyday environment in your vagina, but when that harmony is disrupted, either by nature or invasion, it can result in odor and discharge. Speaking of “invasion,” as Weiss mentioned, semen can also cause a metallic odor.

“Semen within the vagina can alter the pH and contribute to a metallic odor. If vaginal pH is elevated from any trigger such as your period, sex, etc. it’s important to return it to its normal range,” Weiss says.

That's not to say it's always going to be expected. Clarke notes that the beginnings of spotting from miscarriage can have an almost overwhelming metallic aroma, and that would be both jarring and heartbreaking. Also, if you think you're getting your period and instead get implantation bleeding, you could get the smell and a baby, which, if you aren't expecting it, might freak you out.

Smelling a metallic aroma during pregnancy isn’t always all bad. Weiss says, “Changes in vaginal odor are common in pregnancy and are usually due to shifts in hormones. Most of the same reasons for metallic odor in non-pregnant patients apply to pregnant patients. But if the metallic odor is accompanied by other symptoms — like bright red bleeding or heavy cramps — you should contact your healthcare provider.

Other Causes of Vaginal Odor

"Fishy odors, rotting smells, yeasty aromas, and the smell of fecal matter are the odors that are concerning," says Clarke. Fishy smells typically mean a bacterial infection. Yeasty smells like beer or bread mean an overgrowth of yeast. A rotting odor might be a forgotten tampon or other infection. A fecal smell, while it could just be hygienic, might point to a vaginal fistula.

Evidence suggests women are often more worried and self-conscious about the smell of their genitalia than they probably should be, noted Feminism and Psychology. Think of all of the off-color fish jokes you've heard bandied about women over the years. Heck, even drag queens who define their look as acutely, stereotypically feminine, refer to themselves as "fishy" or "serving fish." When I was growing up, there was a very famous douche commercial that ran frequently that discussed douching for when you feel "not so fresh." It's endemic to a misogynistic society that the natural fragrance of a woman's body is made use for comedy and lambasting for public consumption. It can make you hyper aware of your scent down there. Even if it's completely normal, as is the case with a metallic smell most of the time, according to Clarke.

“A metallic smell is just a matter of course in life for most women. However, if it concerns you, or if it persists, definitely call your provider and have it checked out. It's always better to know than to worry,” Clarke says.

Dr. Gil Weiss, OB-GYN, partner at Association for Women’s Healthcare and assistant professor of clinical medicine in the Department of Obstetrics and Gynecology at Northwestern Memorial Hospital.

More Like This
When Does Pregnancy Horniness Kick In?
OB-GYNs On How The End Of Roe Changes How They Can Care For Us
Barre Could Be The Low-Impact Prenatal Workout You Need
How My Neurodivergent Son Taught Me To Move Through Life In A Wholly Different Way

This article was originally published on Jan. 19, 2018