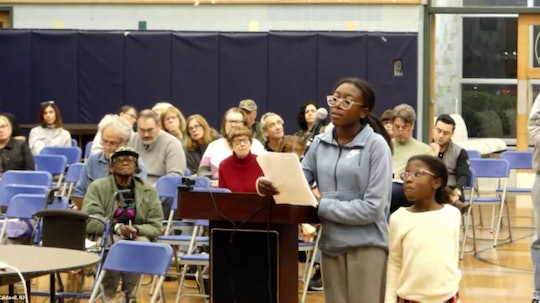 Bobbi Wilson was trying to help a local tree by spraying for lanternflies.

Bobbi Wilson, a fourth grader from Caldwell, New Jersey, knows all about lanternflies. She studied their negative environmental impact in school. So when she saw on TikTok that a vinegar could kill the bug, she was eager to try it out on infested trees on her street. However, as she was spraying for lanternflies, her neighbor called the cops on the 9-year-old, telling them a “little Black woman” was “scar[ing]” him. The experience was traumatic for Bobbi and her family, but scientists at Yale have stepped up to try to encourage the young scientist to stay curious and keep up her efforts to help the environment and her community.

Bobbi’s mother, Monique Joseph, and 13-year-old sister, Hayden, opened up about the Oct. 22 incident at a recent town council meeting. “Racism, intentional or not, is still racism,” Joseph said in her opening statement. While she commended the actions of the responding officer, who encouraged Bobbi in her efforts, Joseph said that her neighbor of eight years, co-chair and treasurer of Caldwell’s Republican Party Gordon Lawshe, “put my daughter in harm’s way” with his call.

“I want this to be a teachable moment for our town on racial bias, diversity, equity, and inclusion and how we together can assure that going forward little Black and brown children in this town can feel safe,” she said.

In her comments, Hayden noted that “Mr. Gordon” knows her family, and could have come to their mother if he had concerns. She also noted that Bobbi, whom Lawshe referred to as a “woman” twice, is under five feet tall. “No kid should have to be scared in their own town on their own street,” Hayden said. “I can confidently assure you guys she will never forget this.”

Dr. Ijeoma Opara, a tenure track assistant professor at Yale and founder of the University’s Substance Abuse & Sexual Health Lab, saw coverage of Bobbi’s plight and put out a call on Twitter to find the girl and her family. Well, they did connect and Dr. Opara had a great surprise for her. Bobbi, Hayden, and Joseph were invited to Yale for “a Black girl led science tour.”

Bobbi was encouraged by other Black female scientists during her tour of Yales various labs.

They received tours of different science labs on campus — where she was able to learn about experiments conducted by Black female scientists. She even got to name a lab mouse! (She went with “Bob.” 10/10. No notes.) The day ended with a visit to the Department of Entymology, where she was able to peruse their collection and receive a promise: if Bobbi collects more lanternflies, she can contribute them to Yale. This means that anyone who used the lanternfly specimens she collects would have to credit her in perpetuity. “Come on Black girl magic!” Opara cheered.

It’s a wonderful coda to a horrible incident for the family, but unfortunately they may not be able to put it behind them just yet. According to a report from WPIX11 News, Lawshe has signaled that he may be taking Joseph, along with “several other individuals” to court for defamation. A GoFundMe has been established for the family to support any legal fees.

While Bobbi was, according her mother, scared to go outside following the incident, her commitment to environmental stewardship, cannot be deterred — even after the incident, The Progress reports that she rallied neighbors to help her squish the lanternflies. She plans to keep up her efforts until the insects go dormant in the winter. Black girl magic, indeed.

More Like This
Michigan Right-Wing Group Wants To Erase LGBTQ+ Sex Ed
Teacher Shot By 6-Year-Old Student Told School He Had A Gun, Was Told To "Wait"
Florida Teachers With “Unvetted” Classroom Books Could Face Felony Charges
10 Great Podcasts That Will Keep Your Kids Entertained On Your Next Family Road Trip
What Parents Are Talking About — Delivered Straight To Your Inbox