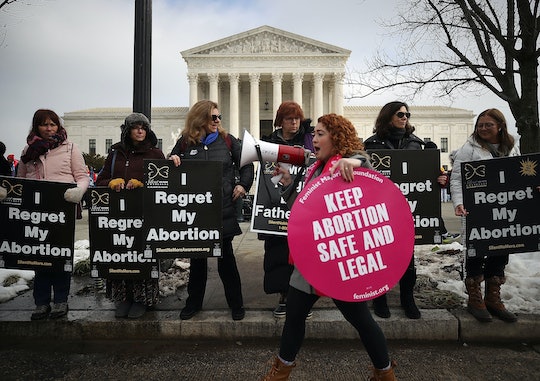 Here's How You Can Fight So-Called "Heartbeat Bills"

The abortion law, dubbed "heartbeat bills" by advocates, prohibits abortions after detection of a fetal heartbeat during an ultrasound, which doctors say can be as early as five or six weeks into the pregnancy. This is oftentimes before women, trans, and non-binary individuals know they are pregnant. Ohio’s version of the bill would subject doctors who perform an abortion after the detection of a fetal heartbeat would be subject to a $20,000 fine from the state medical board, could have their medical licenses suspended or revoked, and could face up to a year in prison, according to The Hill and NPR.

The ban, signed into law by Gov. Mike DeWine of Ohio — in stark contrast to the two-time veto of a similar bill by his predecessor former Gov. John Kasich — late last week is part of a wide-sweeping effort at the state level to ban abortion. States like North Dakota, Arkansas, Kentucky, Iowa, and Mississippi have also passed similar laws, according to The Hill, however, many of the passed abortion bans in these states have been reviewed or thrown out by the courts. Mississippi’s law is set to take effect in July, according to the Associated Press.

Meanwhile, similar heartbeat bills have advanced in one chamber of state legislatures in Missouri and Tennessee, according to USA Today, and may be on their way to pass in the near future. The legislation has been introduced in Florida, South Carolina, Louisiana, Minnesota, Illinois, Maryland, New York, and West Virginia.

For many anti-abortion activists and conservative leaders, this is an opportunity that could eventually lead to a Supreme Court challenge of the 1973 Roe v. Wade decision.

Planned Parenthood promised eventual Supreme Court action to battle out the national issue. "If this is what it takes, we will see you at the Supreme Court," the organization’s Ohio president Iris Harvey said at a rally on Wednesday, NPR reported.

Those looking to join the fight can contribute in a multitude of ways. Currently, House Republicans are attempting to advance a bill in Congress that, if passed, would be a federal restriction on abortion after six weeks. While a bill like this one is likely to face considerable obstacles, considering Democrats currently control the House of Representatives, you can sign this petition by NARAL that would firmly oppose any anti-abortion legislation before it even gains traction.

Be sure to contact your representatives to make your pro-choice stance clear and affect legislation on a local level before it can advance to policy. Begin by going to this guide, which will direct you to your state assembly or legislature website, and then navigate to find your state website’s page to identify your representatives. To find your governor’s information, go to this website and simply choose your state from the drop-down menu.

Outside of donating, you can also raise money for these organizations by teaming up with the organization and creating your own personal fundraising campaign. If you have a birthday coming up, you can ask family and friends to donate the amount of your age to a selected organization as your birthday gift. If you’re planning on getting hitched, you can make an organization like the ACLU a part of your wedding registry and ask your guests to donate to the cause instead of giving traditional gifts. Here are do-it-yourself fundraising tips published by the ACLU that can get you started.

With an overwhelmingly conservative Supreme Court bench and multiple states rallying to fight the good fight on abortion laws, it is now more important than ever to take action to preserve women’s rights.

More Like This
This Map Illustrates Just How Many States Would Ban Abortion If Roe V. Wade Is Overturned
OB-GYNs On How The End Of Roe Changes How They Can Care For Us
Obamas Issue Powerful Statements After Supreme Court Ends Roe v. Wade
How Title IX Changed The World For Girls