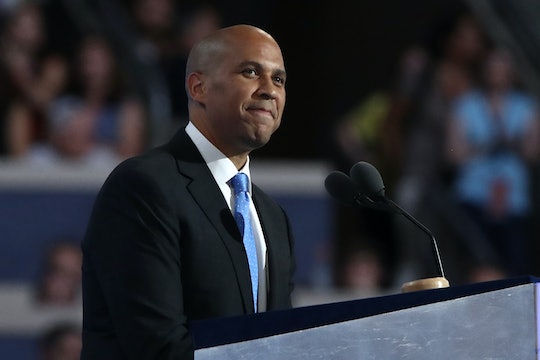 The 2020 presidential election is around the corner and politicians have been steadily announcing their plans to run for their party's seat. And on Friday, Feb. 1, 49-year-old New Jersey Democrat, Sen. Cory Booker, formally announced his plans to run for president. But before you hear all about his platform, these 10 facts about Cory Booker will help you get to know him a bit better as election season kicks into high gear.

In the early hours of Friday morning, Booker chose to announce his run for president with a YouTube video, according to CNN. "The history of our nation is defined by collective action; by interwoven destinies of slaves and abolitionists; of those born here and who choose America as home; of those who took up arms to defend our country, and those who linked arms to challenge it and change it," Booker said in the video.

Over the next year, people will learn more about what Booker stands for on important issues, on top of what they know already about the senator and his voting record. And until then, it certainly doesn't hurt to learn more about who Sen. Booker is — especially since public polling suggests he is "unknown to many Americans," according to CNN.

So, here are 10 interesting facts to know about him ahead of the 2020 presidential election.

Booker became a vegetarian in 1992, according to U.S. News & World Report, but fully switched over to a vegan diet in 2014, according to Mercy For Animals.

In 2014, Booker explained his reasoning for changing his diet in an interview with the Daily Beast: "I want to try to live my own values as consciously and purposefully as I can. Being vegan for me is a cleaner way of not participating in practices that don't align with my values."

If he becomes president, Booker would be the first vegan president elected into office, according to Mashable. While President Bill Clinton is a proud vegan now, according to the AARP, he became a vegan in 2010, many years after he left the Oval Office.

Booker is a bachelor, according to INSIDER, having never been married or engaged before. This might be hard to believe, especially since some people believe Booker is quite the catch.

But Booker isn't cynical about relationships — he definitely believes in love, and it's something he openly talks about in his political speeches, according to The Atlantic.

If he's elected, he would be the first single president elected into office since President Grover Cleveland (the 22nd and 24th president), according to The Root, who ended up marrying while he was in office.

3. He Saved Someone From A Burning Building

In 2012, Booker was coming home from an interview when he saw a small apartment building next to his home on fire, according to Politico. Booker rushed inside of the apartment building, where he was able to locate the fire and help a woman out of the building.

Booker was taken to the hospital for second degree burns and smoke inhalation, but he and the woman whose life he saved were fine, as Politico reported.

4. He Delivered Diapers In A Snow Storm

Talk about a true hero. During a 2010 New Jersey snowstorm, the then-mayor hand delivered diapers to a snowed-in home, according to NPR. During that same blizzard, he also helped shovel sidewalks and dig cars out of the snow, according to the New York Daily News.

In 2013, when Booker was the mayor of Newark, New Jersey, he was very responsive to tweets. So, when one reporter tweeted to Booker that she saw two dogs left outside in the freezing weather, Booker went to save the day, as Mashable reported.

Booker not only visited the dogs in person, but he found them warmth inside a police car and talked to the owners about the importance of keeping their dogs inside.

6. He Played Football In College

Before he set his sights on a political career, Booker set his sights on football. Booker played football at Stanford University while he was an undergrad, according to The Inquirer, and once stated that he wanted to play in the NFL. But things didn't exactly go as planned.

7. He Isn't Afraid To Make A Bold Statement

In 1999, as a city councilman, Booker went on a 10-day hunger strike and camped out in areas, ridden with crime, to draw attention to certain issues in the city, according to Roll Call. And according to Booker's tweet, this strike worked — they were able to get a park built for residents.

8. He Was Rumored To Be Dating A Famous Actress

Earlier this year, Booker and actress, Rosario Dawson, were spotted seeing a movie together in New York City, according to Page Six. Although neither party commented on the status of their relationship, or if they're just friends, this made Booker's personal life all the more interesting.

9. He Appeared On An Episode Of Parks & Recreation

Booker's face isn't entirely new to a lot of people. In 2015, the senator appeared on the NBC comedy, Parks & Recreation in a cameo with Utah Sen. Orrin Hatch, to talk about bipartisanship, according to The Hill.

10. He Has A Passion For Helping People

Booker was helping people far before his political career started. While at Stanford University, Booker helped lead a crisis counseling center, according to The Inquirer, staying up late to help students with their relationship troubles and suicidal thoughts.

It seems as if he has had a life long passion for helping people, and it'll be interesting to see what he does during his 2020 presidential run.