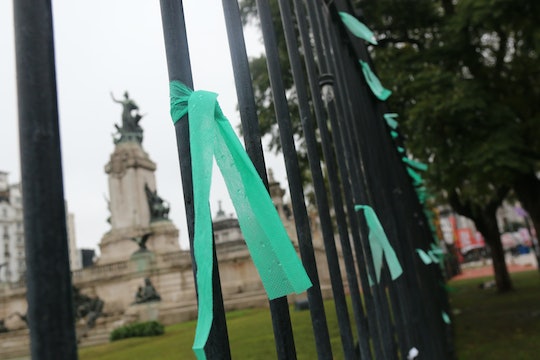 In a distressing case that highlights the necessity of reproductive health freedoms, especially in Latin America, the BBC reported this week that an 11-year-old was forced to have a C-section after she was denied an abortion. The girl, who became pregnant after she was raped by her grandmother's 65-year-old partner sought an abortion, according to CNN, but her request was delayed nearly five weeks and doctors then refused to perform the medical procedure.

The BBC reported that medical professionals said it would have been too risky to perform the abortion — which is illegal in Argentina, except in cases of rape or danger to the mother's health, according to Human Rights Watch — on the girl, who was 23 weeks pregnant by the time her request received a response. Eventually she underwent a C-section instead, according to USA Today. While the baby is alive, it has little chance of surviving, The Guardian reported.

While local health officials said the girl's mother initially indicated that she would care for the baby, according to CNN affiliate TN, media outlets in the area reported that the assault victim, who has not been identified, was clear from early in her pregnancy that she wanted an abortion. "I want this thing the old man put inside me taken out," she reportedly told officials, according to TIME.

The procedure was reportedly delayed because of uncertainty surrounding guardianship of the girl, according to USA Today. Her mother consented to the abortion, according to the news outlet.

The child was under her grandmother's care for some time, however, so her mother's agreement was initially deemed insufficient, The Guardian reported. According to the BBC, her grandmother had been stripped of her guardianship for living with the girl's rapist, though, so she too was unable to consent to the abortion. By the time Argentine officials came to a decision, the victim was more than halfway into her pregnancy which, as detailed in The Guardian's reporting, led to further issues.

Speaking with state-run news agency Telam, Ross Chahla, the health minister of Tucuman, denied that the health care system "obstructed" or "delayed the abortion" in any way, according to CNN's local affiliate news outlet, and he maintained that the procedure was only requested on Monday.

Doctors at local hospitals reportedly refused to perform the abortion, citing personal beliefs, according to The Washington Post. On Tuesday, as Clarin, Argentina's largest newspaper, reported, health authorities in Tucuman reportedly ordered the hospital director to follow the family judge's decision and perform the "necessary procedures to attempt to save both lives." The family court, however, refutes any claim they told the hospital to save both lives, according to the BBC.

ANDHES, a human rights group in Argentina, has backed the victim, placing blame on local health authorities. CNN reported that the group compared what happened to the victim to "torture." Fernanda Marchese, executive director of ANDHES, criticized Argentine authorities for their handling of situation. "We should have never gotten her," she said, according to the CNN affiliate. "The law is clear in that sense."

Other organizations, like Argentina's National Campaign for the Right to Legal, Safe and Free Abortion and Amnesty International, have condemned it as well, according to CNN's affiliate. Amnesty International's Argentina office tweeted, "The unwarranted delay to a legal abortion violated the girl's right to health, her autonomy, privacy and intimacy, revictimizing her."

Amnesty International's American office has also spoken out in support of the Argentine victim. In an article published on its site, the group said that Argentine authorities "must be held accountable for putting at grave risk the life of an 11-year-old." Amnesty International America's director, Erika Guevara-Rosas, said officials should have focused on "protecting her life." In the same article, Guevara-Rosas added,

When this 11-year-old rape victim entered [the] hospital requesting a legal abortion, the authorities' number one duty should have been protecting her life and health. Instead, they put up obstacle after obstacle with the sole aim of denying the girl her rights. Forcing an 11-year-old girl to have to resort to an emergency cesarean which could have been avoided is a cruel injustice that inflicts such psychological and physical harm on the child it could amount to torture under international law.

Abortion has long been a contentious debate in Latin America and, more specifically, Argentina. The country's Supreme Court decriminalized abortions in cases of rape in 2012, according to TIME, but pro-choice advocates have pushed for more freedoms. Last year thousands took to the streets as lawmakers debated legislation that would legalize elective abortions in the first 14 weeks of pregnancy but, as reported by CNN at the time, the bill was rejected.

It's unclear whether this latest case will bring about new abortion legislation in Argentina, but reproductive health advocates will continue to back those affected by the current laws in place.

More Like This
Can States Ban The Abortion Pill? FDA Rules May Make That Hard
Chris Evans Has Choice Words For Critics Of The Same-Sex Kiss In 'Lightyear'
Keep Talking To Your Kids About Abortion — It's More Important Than Ever
Ireland Baldwin Shares Her Abortion Story In An Emotional TikTok