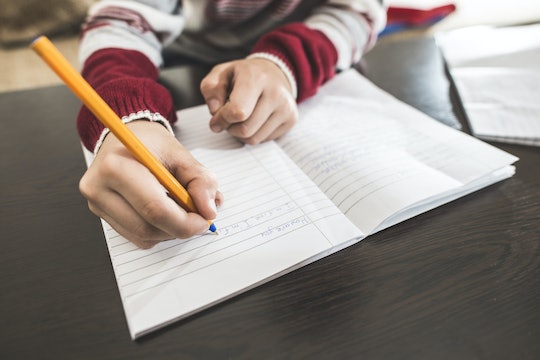 Imagine, if you would for a minute, that you're an undocumented immigrant who came to America looking for a better life. You get here, and you're put into a detention center, with your only access to the outside world is a lawyer you might not even be lucky enough to have. Sounds pretty depressing, right? Since you're very likely not in that position, as you're reading this article right now, you have the opportunity to take advantage of pen pal programs for immigrants in detention, as Mashable reported. That's right — you and your kids can write to individuals who are awaiting their immigration fate in detention centers all over the country.

As of November 2017, U.S. Immigration and Customs Enforcement operates 1,478 adult detention centers around the country, according to Business Insider. That number does not include U.S. Customs and Border Protection facilities, for the record. That means there are countless undocumented individuals who are awaiting a trial that could lead to deportation, who may have no one — friends, family, or acquaintances — here in the United States to turn to for support or just friendly conversation.

Why not get your kids involved in making their stay and their days a little bit brighter? In fact, there are a lot of pen pal programs for immigrants in detention, and the ones here are just a few of the options you and your family can choose from.

HIAS partners with Freedom for Immigrants, an organization focused on ending isolation and abuse in the U.S. immigration detention system, on a letter writing program, as Hello Giggles reported.

HIAS volunteers are matched with individuals in Freedom for Immigrants' “Pen Pal” database, according to the HIAS website. In particular, asylum seekers who have requested compassionate correspondence with others are matched up with pen pal volunteers.

The Lutheran Immigration and Refugee Service (LIRS) also offers a program where you can connect with a pen pal in detention through letter writing, as Mashable reported. The organization's website even offers a sample letter if you're intimidated by the thought of writing to a stranger.

Basel Mouslly, the Program Manager for Detention Visitation at LIRS, told Mashable that they have more than 374 pen pal volunteers. But that doesn't necessarily mean they won't welcome more.

First Friends of NJ and NY

First Friends of NJ and NY is an organization that promotes compassion and hope for detained immigrants and asylum seekers with volunteer visitation, resettlement assistance, and advocacy, according to its website.

The organization needs volunteers for several different programs, including a pen pal program. "This is a great opportunity for those who are house-bound or who are not able to visit the detention centers," First Friends of NJ and NY's volunteer opportunity page notes. The organization also runs a program for volunteers to visit with detainees, and other advocacy efforts.

The Queer Detainee Empowerment Project is a project of the Center for Transformative Action. The organization helps people coming out of immigration detention to secure structural, health and wellness, educational, legal, and emotional support and services, according to its website.

Its mission says that QDEP works specifically with "Lesbian, Gay, Bisexual, Queer, Two Spirit, Trans, Intersex, Gender Non- Conforming, and HIV+ (LGBTQIA* GNC TS) immigrant prisoners and their families." The organization works with those currently in detention centers, people who have been recently released from centers, and people who are at risk of entering immigration detention in the tri-state area, meaning Connecticut, New Jersey, and New York.

QDEP also has a "prisoner pen pal program." It looks like you have to attend a volunteer orientation held periodically during the year to take part in any of QDEP's volunteer activities, but that's actually pretty standard for most volunteer programs.

There are so many other pen pal programs for individuals who are in immigration detention throughout the United States. If you want to take part in one with your kids, choosing any of the options here is a great move, or you can find a more local organization in your area that needs volunteers. They're almost definitely looking for more help.