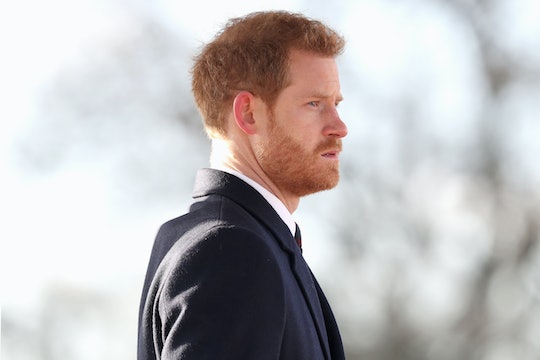 American actress Meghan Markle's recent engagement to Prince Harry is all that anyone can talk about. It is clear that the couple could not be any more in love and it shows that they bring out the best in each other. During a recent public appearance, Markle assured people that her fiancé was, indeed a feminist. And Prince Harry's feminist quotes prove that Markle is right, he is definitely a feminist and it is awesome.

Just one week ago, a well wisher told Markle that they were happy that a feminist would be marrying into the Royal family come May, according to ABC News. But Markle had the best thing to say in reply about her fiancé. "He's a feminist, too," Markle reportedly told the well-wisher. Markle is well known for not only being an actress, but a feminist, too. When she first got engaged to Prince Harry, several people commented on how Markle would be the first feminist princess. Videos from Markle as a young girl show that she was advocating for the fair and equal treatment of women from the start. But Prince Harry's quotes, too, show that he is also an advocate for women. While his quotes might not be too abundant, these quotes do show that Prince Harry believes in the fair and equal treatment of women.

Shortly after word got out that Prince Harry and Markle were definitely dating, some people were saying some not so nice things about Markle. Because of this, Prince Harry had to issue a statement coming to her defense, telling people to leave her alone, which some people saw as a feminist thing for him to do. In the statement, Prince Harry called for fair treatment of his girlfriend through his communications secretary:

Prince Harry is worried about Ms. Markle's safety and is deeply disappointed that he has not been able to protect her. It is not right that a few months into a relationship with him that Ms. Markle should be subjected to such a storm. He knows commentators will say "this is the price she has to pay" and that "this is all part of a game." He strongly disagrees — this is her life and his.

Defending his girlfriend, now fiancé, was super noble. He didn't have to do it, but he did.

In 2016, Prince Harry gave his most revealing speech about feminism, ever. During a visit to the Nepal Girl's Summit in Kathmandu that March, according to HuffPost, Prince Harry gave a speech acknowledging powerful women role models and (like Michelle Obama and Malala Yousafazi) and touted on the importance of education for young girls. Prince Harry even admitted that up until that moment, he had never really spoken about feminism, but the speech gave him the outlet to do so — and it was a good thing it did because he killed the speech. Prince Harry said, according to HuffPost:

While the unique challenges faced by girls is not a topic I have spoken much about in the past, I think it's important to acknowledge something that has become obvious to me and is already known to everyone in this room: there are way too many obstacles between girls and the opportunities they deserve.

Can you give an applause for that awesome quote? There are too many obstacles between young girls and the opportunities they deserve but don't necessarily get. Prince Harry bringing attention to this on a global scale is an awesome thing for him to do. But championing for "vulnerable children and young people" is part of Prince Harry's humanitarian work, so this should be a given.

Being An Advocate For Women

In that same speech in Nepal, Prince Harry talked about how everyone must be an advocate for women in order for them to get the fair and equal opportunities that they deserve. Prince Harry said, according to HuffPost:

We won't unlock these opportunities for young women and girls unless we can change the mindset of every family and community. To achieve this, it cannot just be women who speak up for girls.

For the exact reason Prince Harry stated, it is so great for him to do just that — use his platform to stand up for the treatment of young girls and women.

On Treating All Women Equally

Prince Harry has also been a supporter of the HeForShe campaign, a gender equality movement, according to Bustle. Prince Harry reportedly said about the movement:

This is not just about women, we men need to recognize the part we play, too. Real men treat women with dignity and give them the respect they deserve.

Now that Prince Harry is marrying Markle, hopefully there will be many more feminist quotes from him to come in the future. He has a great platform to do so.