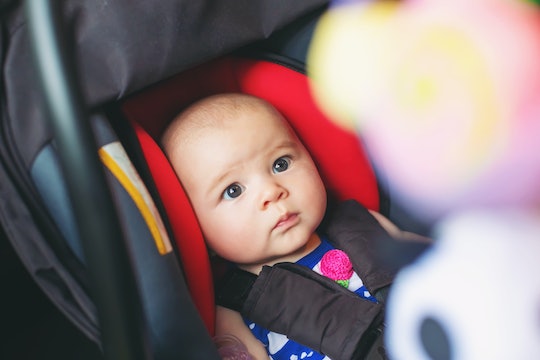 4 Ways Car Seat Laws Have Changed Since The 1980s

While it seems like cars have been around forever, sometimes it's important to remember that in the grand scheme of human history, automobile transportation has only been in popular use for a little over a century. Even more astonishing is that, for most of that century, not only were car seats barely used, but laws for car seats weren't widely adopted until 1985. Even now, there is no single federal car seat law: It's up to each state to legislate its own laws about age, height, and weight requirements for children as passengers. Here are four ways car seat laws have changed since the 1980s.

I have to be honest: I have exactly zero memories of ever sitting a car seat. I was born in 1982, a full three years before both seat belts and car seats were made mandatory for kids, according to data from the Insurance Institute for Highway Safety, Highway Loss Data Institute. What I do remember is sliding around the vast expanse of the bench-style backseat of my parents' Chevy Caprice wagon when I was a kid, even when buckled in. Times, they are a-changin', and thankfully, for the betterment of children's automobile safety. Here's how car seat laws have changed since I was a wee one.

While this might not seem like something that directly benefitted kids in car seats, the requirement that all new passenger cars must have shoulder belts was huge for children who were out of the range of initial child seat law requirements. Additionally, the shoulder belt requirement would pave the way for other means of securing both car seats and kids themselves, from the introduction of the LATCH anchor system in the late '90s, to transitioning kids from their car seat to a regular seat.

In 1997, the National Highway Traffic Safety Administration implemented its certification program for Child Passenger Safety Technicians and Instructors. These CPS technicians and instructors are certified in laws, standards, and regulations regarding the proper installation and use of all manner of child restraint systems. The following year, Dana's Bill was passed into law, which gave states $30 million in federal funds for CPS tech training and inspection stations.

In 2000, Washington became the first state to require booster seats for kids in cars. Its law mandated that children between the ages of 4 and 6 or 40 and 60 pounds must use a booster seat if they are a passenger in a moving car. California quickly followed Washington's lead that same year; both states' laws went into effect in 2002.

Likewise, there are other states where child car seat laws are still lacking, even in 2017. Florida and South Dakota are the only two states that don't have laws about booster seats. A majority of states — 34, to be exact — have no laws requiring that children should be seated in rear seats. Only five states have laws about seat belts on school busses. As complicated as car seat laws, recommendations, and regulations may be, we have to remember what's at stake here: Our kids' safety if, heaven forbid, the unthinkable happens on the road.

More Like This
I Started a Magazine for Gay Parents in 1998. Here's What's Changed Since Then.
How Title IX Changed The World For Girls
Viral TikTok Breaks Down How Beautifully Bluey Depicts One Character’s Infertility
Keep Talking To Your Kids About Abortion — It's More Important Than Ever