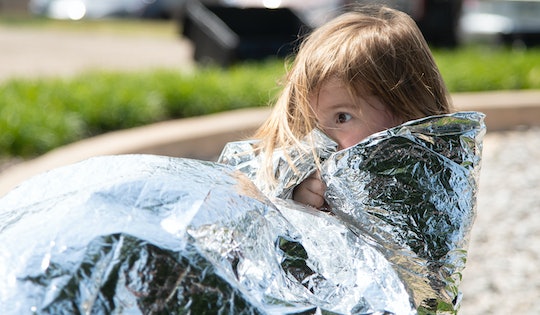 The U.S. government is currently keeping hundreds of immigrant children in detention facilities separated from their parents. Conditions inside the camps have been described as unsanitary, as the Associated Press reported last week, with lawyers warning that there are older children caring for younger ones as well as a lack of food, water, and sanitation. Following these disturbing reports, many are looking for ways to help immigrant kids in detention centers. While there isn't one simple way to reunite these children with their families immediately, there are ways to help make a difference.

Doctors, lawyers, and other advocates have revealed serious health and hygiene problems at more than one U.S. Customs and Border Protection facility recently. Attorney Toby Gialluca told CNN, "Virtually everyone we saw was ill" inside the Ursula Processing Center in McAllen, Texas. Gialluca also told CNN children had colds and other ailments and claimed "they didn't have access to soap to wash their hands."

In addition to lack of access to soap, detainees reportedly didn't have basic products necessary to care for younger children at the centers. AP reporters visited one camp where three girls said they were trying to care for a 2-year-old, who wet his pants, had no diaper, and was wearing a mucus-stained shirt. One teen interviewed by the AP said, "A Border Patrol agent came in our room with a 2-year-old boy and asked us, 'Who wants to take care of this little boy?' Another girl said she would take care of him, but she lost interest after a few hours and so I started taking care of him yesterday."

Romper's request for comment from CBP was not immediately returned, but following these appalling reports and the subsequent outrage, hundreds of immigrant children have since been transferred out of an overcrowded facility in Texas with "inhumane conditions" and into other facilities, PBS reported on Monday evening.

It's easy to feel helpless when reading news such as this and you may feel like there's nothing you can do, but there is. As the Women's Refugee Commission pointed out, there are plenty of ways to help immigrant children in these detention facilities and some are more simple than you might think.

One way to get involved, according to The Cut, is to volunteer at organizations focused on helping immigrant children. The Texas Civil Rights Project, for example, is often looking for "volunteers who speak Spanish, Mam, Q'eqchi' or K'iche' and have paralegal or legal assistant experience."

Donate To Groups Fighting For Immigrant Children & Their Families

If you're not able to volunteer your time and skills, you can always donate money to organizations that are working to free migrant children from detention centers, or make their time their more comfortable.

Such organizations include the Refugee and Immigrant Center for Education and Legal Services (RAICES), which is the largest immigration nonprofit in Texas, according to its website, and is dedicated to providing free or low-cost legal services to immigrants who need it.

The Young Center for Immigrant Children's Rights is another worthy organization. According to its website, the organization advocated for separated and unaccompanied children.

Las Americas Immigrant Advocacy Center, which provides legal representation to low-income immigrants and families looking to be reunited is another cause seeking donations.

As always, the American Civil Liberties Union (ACLU) is also accepting donations while it works to fight in court for the rights of migrant children in detention centers.

In some cases, those looking to help immigrants detained in the U.S. can post bail for those in detention centers. According to Market Watch, bonds range from as low as $1,500 to $80,000. Pilar Weiss, director at the National Bail Fund Network, told Market Watch it's one of the fastest ways to reunite detained immigrant children with their families, as it can immediately "lead to freedom." Sadly, Market Watch noted that under the Trump administration few immigrants have been offered bail, at least initially.

NOLO, a legal site, reported that those who wish to post bail for detained immigrants must find out through Immigration and Customs Enforcement (ICE) whether bail for a detainee has been set. To do so, one would need the name of the detainee they're looking to free.

Organizations helping fund bails for immigrants in detention centers include National Bail Out, The American Bar Association, Queer Detainee Empowerment Project and Freedom for Immigrants. Those unable to cover the full cost of bailing detained immigrants out of detention centers can donate to one of those projects, and put a dent in potentially high bail for one or more detainees.

Give To Crowdfunding Pages

Donating to crowdfunding efforts is another big way to help immigrant children in detention centers. There are tons of pages established, like this CrowdRise established by Pueblo Sin Fronteras and Freedom for Immigrants, which aims to help children afford to communicate via phone with legal teams, organizers, and family members.

Money and donations aren't the only way to be of service to detained immigrants. For instance, those living in New York City can also visit NewSanctuaryNYC.Org to learn more about the New Sanctuary Coalition accompaniment program, which trains volunteers to tag along with people facing deportation to their immigration hearings, according to its website. Volunteers will be expected to provide moral support and "hold immigration authorities accountable."

A major reason children in immigration centers are without adequate supplies in detention centers is a lack of funds. On Monday, billions of dollars in emergency aid to help properly care for undocumented immigrants in the United States was in doubt as a single Republican senator reportedly held up the funds, according to Roll Call. There is one simple way to get the ball running again: Call your representatives and let them know that this issue is important to you.

Once you've gotten through, ask to speak to the aide who works directly on the issue for which you're calling. If you can't speak directly to that person, ask to leave a message with the receptionist.

Separating children from their families is appalling, and keeping them in unsanitary and overcrowded conditions is horrific. And, unfortunately, there's currently no end to the atrocity in sight at this time, but there are ways you can help make a difference.

Editor's Note: A previous version of this story mischaracterized one way people can donate. It has since been updated.