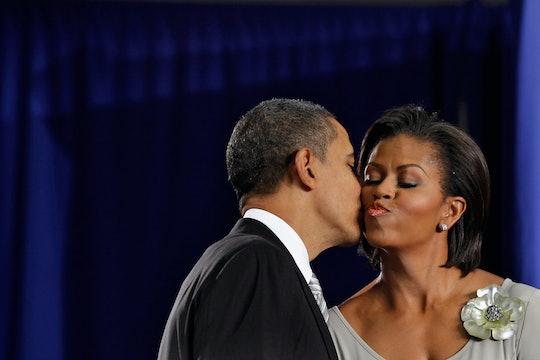 Valentine's Day will soon be upon us. And while that's great news for anyone with a honey to snuggle up with, it's just another day in the single life for others. But rather than bask in bitterness, let's look a love story everyone can get behind, so here are seven of Barack Obama's most romantic quotes about Michelle Obama that will warm your heart and make you believe in love.

The Obamas have been married for longer than I've been alive — 26 years of marriage as of Oct. 3, 2018 — and they've been relationship goals from day one. All throughout Barack's presidency, the citizens of these United States were blessed with more than a few sweet moments of love between the president and the first lady. Regardless of your political views or opinions on the eight years President Obama was in the White House, there is no contesting that he has one of the most inspiring marriages the United States has ever seen.

The truly amazing thing about the Obamas' relationship is that it goes beyond just caring and affection; when it boils down, the two have a deep and lasting respect for one another that has carried them through the good times and the bad. In various interviews, Barack has opened up about his relationship with Michelle, as well as the way their family functions as a unit. Time and again, he has shown that it is friendship and respect that make a marriage last.

On Being Best Friends

Along with being life partners, any happily married couple will tell you that friendship is at the heart of their relationship. When it comes to being friends, the Obamas are besties. In his 2017 Farewell Address, Barack thanked Michelle for being everything he needed for two and a half decades, as Teen Vogue reported:

For the past 25 years, you’ve not only been my wife and the mother of my children, you’ve been my best friend. You took on a role you didn’t ask for and you made it your own with grace, grit and style.

On Sticking It Out

Marriage is never easy, but with enough cooperation and gumption you can make it work and even enjoy it. In 2012, the Obamas sat down with Barbara Walters to talk marriage, among other things. Barack explained the importance of working through hardship together, according to Essence:

We’ve been married now twenty years, and like every marriage you have your ups and you have your downs, but if you work through the tough times the respect and love that you feel deepens.

On The Impact She's Had On Him

It has been said that behind every good man is a good woman cheering him on. According to President Obama, Michelle is that woman for him. He told Vogue in 2012 that he and Michelle are a team, but he credits her for making him the man he is today:

There's no doubt I'm a better man having spent time with Michelle. I would never say that Michelle's a better woman, but I will say she's a little more patient.

On Michelle As A Mother

Watching the person that you love become the parent of your children is an experience like no other. In an interview with Essence, Barack shared how Michelle has become a role model for their two girls, as well as how their relationship as a couple impacts their children:

The great thing about the girls is they've got a wonderful role model in their mom. They've seen how Michelle and I interact — not only the love but also the respect that I show to their mom. So I think they have pretty high expectations about how relationships should be, and that gives me some confidence about the future. I joke about this stuff sometimes, but the truth is they are smart, steady young women.

When speaking with Ladies Home Journal in 2012, Barack shared his favorite aspects of Michelle's personality, saying:

Having said all those things, the quality I love most about her is, she's honest and genuine. I think that comes across to people. They get a sense that they can trust her. You know, the word "authenticity" is overused these days. But I do think it captures what folks are looking for — not just in leaders, but also in friends and in coworkers — and that is, folks who are on the level. People like that tell you what they think and don't have a bunch of hidden motives. That's who Michelle is.

On Being Her Cheerleader, Too

The image of the FLOTUS that comes to mind is often a somewhat silent, supportive partner there for the POTUS as he deals with the difficulties that come with running a country. But long before Michelle Obama was living in the White House, she was grinding on her own. Among her many accomplishments, Michelle boasts careers as a writer, lawyer, and university administrator, as well as two Ivy League degrees — a B.A. from Princeton University and a J.D. Harvard University, as CNN reported.

But Barack isn't the kind of man to feel less than because his wife is a badass. No, he told Marie Claire in 2008 that he has "always found it great," saying:

I've got to say, I always found it great if she was making all kinds of money, didn't feel threatened by that at all. My grandmother generally earned more than my grandfather when I was in high school, so that probably makes me more comfortable with some of these issues than others would be.

On Acknowledging Her For Who She Is

When a couple has been married for decades, it is easy to lump them together as one entity: The Obamas. But it is important to remember that that unit contains two unique individuals who have made the decision to be together. The magic of that reality is not lost on Barack Obama — as he told ABC News way back in 1996:

Sometimes, when we’re lying together, I look at her and I feel dizzy with the realization that here is another distinct person from me, who has memories, origins, thoughts, feelings that are different from my own. That tension between familiarity and mystery meshes something strong between us. Even if one builds a life together based on trust, attentiveness and mutual support, I think that it’s important that a partner continues to surprise.

While these are just a few of my favorite Barack Obama quotes about his wife, they should be more than enough to get you through the Feb. 14. Because, let's be honest: I could write an entire doctoral thesis on the ways that man love his wife. But for the sake of brevity, these do that great love justice.