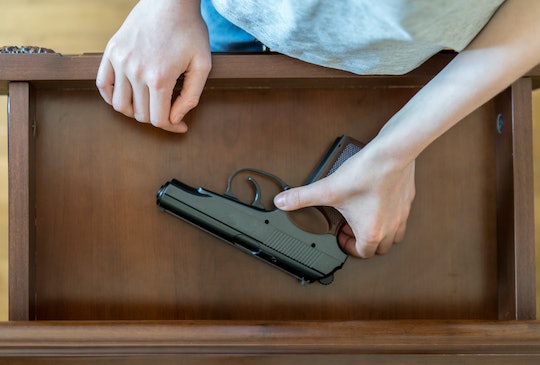 Boy Accidentally Shot His Mom With An Unsecured Gun, & This Tragedy Is All Too Common

Gun safety is a top priority for many families across the United States, which could explain why this story about an 8-year-old boy accidentally shooting his mom is generating headlines. The boy was at a baseball game in Tennessee on Tuesday when he reportedly came across an unsecured gun in a nearby car, highlighting a troubling and common problem regarding proper firearm storage and the lack of legislation in place to adequately deal with this pressing issue.

A mother and son, who have not been named at the time of this writing, were at a baseball game at USA Stadium in Millington, Tennessee, Tuesday night, enjoying what should have been a fun evening. But tragedy struck when the 8-year-old found an unsecured gun in a "vintage World War II jeep that was on display at the stadium as part of a Veterans Appreciation Day," according to ABC News. Thinking that the gun was a toy, the young boy picked up the gun and pulled the trigger, accidentally firing a round into his mother, according to a press release from the Millington Tennessee Police Department.

The boy's mother was then transported to a Memphis hospital in critical condition, police told NBC News.

As for the owner of the vintage car and gun, police arrested a 76-year-old man named Charles McFarland Jr., who faces charges of reckless endangerment with a deadly weapon, according to NBC News.

The Millington Tennessee Police Department did not immediately respond to Romper’s request for comment regarding McFarland Jr.'s arrest.

Unfortunately, this story out of Tennessee is an all too common narrative. If you Google "child finds and accidentally shoots gun," you'll come across a plethora of news articles highlighting the pervasive problem of inadequate gun storage in America. Back in February, for instance, a 4-year-old accidentally shot his pregnant mother in the face after finding a loaded gun under a mattress, according to the Associated Press.

It goes without saying, but no child should ever be in the position to stumble across a loaded gun. Not only could a child critically injure themselves or others, but they could suffer emotional trauma if an accident occurs.

To prevent these types of tragedies, legislation regarding gun safety storage needs to be put in place, experts advise.

"Safe storage laws promote responsible gun-owning practices by requiring gun owners to keep their firearms out of the reach of others, such as children or prohibited persons, who could use the weapon to deadly effect," the organization's website states. "These laws help prevent tragedies due to unintentional discharges, suicide, and gun theft by creating an environment helping ensure firearms are only used by the their rightful owners."

But what's troubling? "Massachusetts is the only state in the nation that requires that firearms be stored with a locking device in place in all cases when they are not in use," according to Giffords Law Center to Prevent Gun Violence. Other states, like New York, California, and Connecticut, have an exemption to this rule, stipulating that a "firearm must be locked if the gun owner lives with an individual who is not allowed by law to possess a gun, such as a convicted felon," according to the legal information website Find Law.

Although many states don't have any gun storage safety laws in place, there are lawmakers and advocates who are working around the clock to change things for the better. Tennessee Sen. Sara Kyle, for instance, recently introduced Makayla's Law, legislation that was inspired by Makayla Dyer, an 8-year-old girl who was killed when, in 2015, an 11-year-old boy shot her with an unsecured BB gun that he found in his family's closet, according to CNN. The boy was convicted of murder following the event, but his father, the owner of the gun, faced no charges.

The legislation would make it a "Class E felony for an adult if a child obtains their gun and injures another child and a Class C felony if a child uses the gun to kill another child," according to The Daily Memphian.

It remains to be seen if this bill will pass in Tennessee, the same state where the shooting incident with the 8-year-old boy and his mother occurred. But what's clear is the need for better gun storage safety laws, legislation that could help prevent other tragedies.