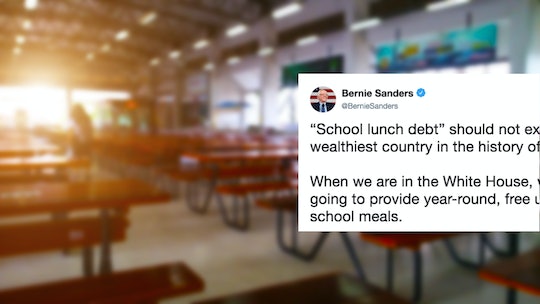 A Boy Paid Off His Class' School Lunch Debt & No, This Isn't A "Feel Good" Story

Hearing about random acts of kindness is almost always heartwarming. Whether it's a restaurant patron leaving a $100 tip to a server who is a single parent or children raising money earned from a lemonade stand to donate to charity. Or even someone paying for a stranger's morning cup of coffee. This unprompted kindness can feel like a breath of fresh, considering the often depressing news cycle. Except when it doesn't. Though this story about a 9-year-old boy who paid off his class' school lunch debt with his allowance is indeed admirable, it actually highlights a troubling concept American kids, and their families, have to face.

A 9-year-old boy named Ryan Kirkpatrick recently had a conversation with his mom about kids who can't afford to buy school lunches, according to Business Insider, and he decided he wanted to help. His mom Kylie proceeded to find out how much third-grade students at West Park Elementary School in Napa, Florida, owed.

Ryan used money from his allowance to anonymously pay off the entire debt, according to The Hill. "I want them to realize people actually think about them because you're not just bragging about stuff," he told ABC News7. "I want them to feel happy someone cares about them."

While the gesture was obviously an admirable and selfless one, plenty of people made a good point on Twitter: Not being able to afford a school lunch, and facing a "debt" if they can't, shouldn't even be an issue in the United States, a country with a developed economy and ample resources.

As Newsweek reported, Vermont Sen. Bernie Sanders took to Twitter on Tuesday to sound off on the issue. "'School lunch debt' should not exist in the wealthiest country in the history of the world," the Democratic presidential candidate tweeted. "When we are in the White House, we are going to provide year-round, free universal school meals."

Plenty of other Twitter users came to a similar conclusion. Another person tweeted, "This country is deranged—children who don't want to starve become debtors before they're 10. Up to 30 million USA children rely on these school lunch programs just to eat."

For the record, this statistic is accurate. In 2016, 30.4 million children participated in the National School Lunch Program — receiving free or reduced-cost lunches — according to the United States Department of Agriculture.

In a tongue-in-cheek tweet, another person wrote, "Adorable! Next up: precocious 7-year old donates half his body weight in blood to help pay off his sister’s leukemia bill after insurance company denial for pre-existing condition!"

Yet another Twitter user wrote, "Individual acts of charity and self sacrifice get presented as 'heartwarming' to distract you from the fact that something as insane as 'school lunch debt' exists in the first place."

Another Twitter user chimed in with, "A 9 year old shouldn’t have to save up his allowance to pay off his class’ school lunch debt. There’s no glass half full scenario here."

Let's get one thing straight: A third-grader seeing a problem and using his allowance money to help in a meaningful way is amazing. There is no doubt about that. However, as noble and pure as Ryan's intentions were, it shouldn't be a 9-year-old who is addressing the underlying problem.

If we truly value children and their education in our society, then their families shouldn't have to worry about school lunch debt — because it shouldn't exist in the first place. School lunches should be free for all children. Full stop. That way, kids won't go hungry and their classmates won't have to save their pennies to bail them out.