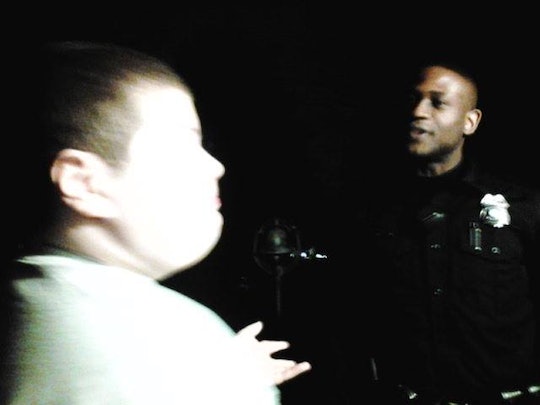 When a New Jersey family received a call from the police last week, everyone except for 12-year-old Ryan Paul was caught by surprise. He had called 911 earlier that Wednesday evening and spoke to a dispatcher before hanging up. So when Ryan was inevitably asked by his father about why he had contacted police, the young boy, who has autism, said he called 911 to “rescue” his teddy bear.

Ryan’s father, Robert Paul, tells Romper that he and his wife were unaware of any previous phone call until they received a second call back from Woodbridge Police Department’s dispatch. When Paul informed the dispatcher that there was no emergency, the department still sent an officer, in accordance with the state township’s policy. That was when Officer Khari Manzini arrived at the "rescue" scene.

"We came as fast as we could," Manzini recalls in an interview with News 12. "Ryan was very happy to see me and I was actually happy to see him happy and that we had gotten the teddy bear back."

"I let the officer know everything was OK and what had happened," Paul tells Romper. "But then my son busted right over to where we were standing and was like, 'Hello!'"

Officer Manzini “was very friendly,” Paul tells Romper, and even agreed to take a picture with Ryan, who was excited to meet the officer. “He was very courteous and treated everything great,” Paul says about Manzini.

Paul also took to Facebook to thank Manzini. "I’d like to thank the officer who responded for his kindness and understanding," Paul wrote in a Facebook post that's received hundreds of likes and shares since he posted it on March 13.

Paul credits POAC (Parents of Autistic Children) Autism Services, a New Jersey program that provides specialized training for police and first responders in autism recognition and response throughout the state. According to NJ.com, Manzini had received training from the program as well.

"He knew how to interact with [Ryan], because sometimes people with autism can be a little distant or not conversational and that can be mistaken as confrontational," Paul explains to Romper. "You never want it to get to the level of the officer thinking that the person isn’t being cooperative when it’s really a trait of the autism."

"To know that it was one of the officers that we trained and that it went perfectly, it made me proud of our organization and even prouder of the officer who responded," POAC Executive Director Gary Weitzen told News 12. The organization has trained more than 65,000 first responders, along with additional trainings for parents and educators, according to its site.

According to POAC’s website, the state of New Jersey has the highest rate of autism in the United States, with one out of every 34 children being born with the genetic disorder. In comparison, the prevalence of autism across the nation was one in 59 children in 2018, a 15 percent increase since 2016, according to the CDC. Individuals with developmental disabilities are seven times more likely to come in contact with law enforcement, according to POAC, which makes safety training all the more crucial.

As for 12-year-old Ryan, his dad said that he’s proud of his son for knowing to call 911 in an emergency.