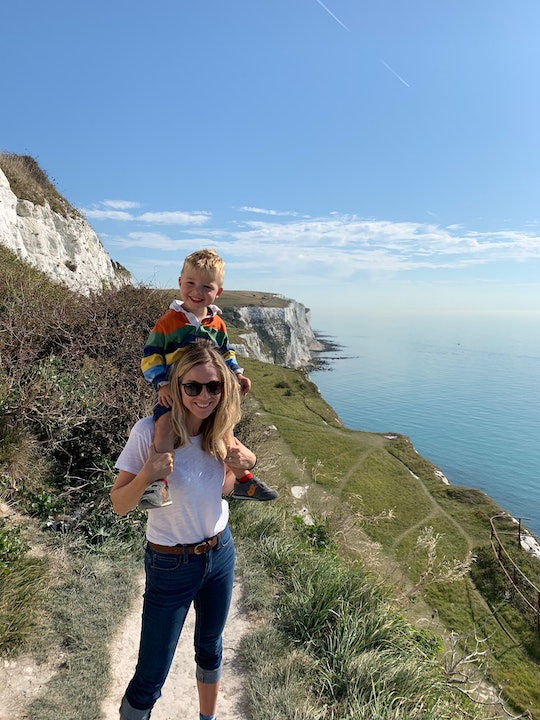 I used to assume there was only one reason a family would book a Disney cruise: to hack the system by visiting places they actually wanted to go while getting the “taking the kids to Disney” childhood experience over and done with.

But when we arrived at the Dover, England, cruise terminal, the sheer scope of my miscalculation began to sink in.

Next to us in line were two middle-aged couples traveling without children. They wore matching tees from a previous Disney cruise, and, they told us proudly, had been on 16 Disney cruises, making them platinum members who could “embark” whenever they wanted. In the same line, a woman wore bedazzled mouse ears and designer Mickey Mouse sneakers, and a handful of twenty-somethings were decked out in the same T-shirts as their entire extended family; their names stenciled on their backs along with: Disney Magic Norwegian Fjords Cruise.

“This is all ironic, right?” my husband asked, his eyes wild.

No grinning and bearing it. Not even a rolled eye.

Later, while trying to find our stateroom (we had been on the boat for 20 minutes, tops), we noticed that many cabin doors were fully decorated. Plus many were adorned with what looked to be souped-up Christmas stockings.

I texted my friend, a self-proclaimed cruiser (the word people call themselves if they take at least one cruise a year and admit it).

Those are the fish extenders for pixie dusting, she texted back. I told you this.

Later that night as we walked down the narrow hallway to our stateroom while carrying our two exhausted kids, I tried my best to explain the fish extenders to my husband as my friend had explained them to me.

“So, if you put up your hanger, strangers leave you gifts?”

“There’s this private Facebook group just for people taking this exact cruise,” I said. Then I think they make groups within that group. They call it pixie dust.”

“If you put up your hanger thing?” he asked, skeptically.

“So they don’t kill your firstborn?”

“They bring all this stuff from home?” he asked, lowering his voice. “Just for the Pixie Passover?”

“Yes,” I said exasperated, as if I had invented it and now had to defend it.

I had no idea.

And the fact that neither of us could comprehend this was starting to bother me.

Because even though my friend had tried to prepare me for the Disney fanaticism, what I wasn’t prepared for was the team happiness; the idea that not only adults (seemingly joyfully) could wear matching clothes all week, but that groups within groups could choose to pack and check extra suitcases of gifts to give to complete strangers.

It was everyone else who confused me. Surely once off the boat, these people weren’t all Ned Flanders in mouse ears. Surely some were actually more like Gorden Gekko when they returned to work — or at the very least were a bit critical and jaded like me.

Really, what I wasn’t prepared for was that all of this would make me question myself instead of them: What’s wrong with me for not wanting to embrace the magic?

During the week, I kept waiting for cracks in their Mouska-armour.

One afternoon on the elevator, a husband and wife were arguing with their teen. Ohh, in-fighting, I thought happily. Then I realized their argument was about princesses marrying in. Still intrigued, figuring they were talking about Kate Middleton and Meghan Markle, I continued listening only to finally catch on that the impassioned altercation was about the other princesses marrying in — Cinderella, Belle, and Tiana.

Later, I attended trivia with my mom and 6-year-old, figuring this would be a good time to throw back a couple Minnie Mouse Mai Tais while my kid showed off her prowess at Name That Tune. Instead, we were completely annihilated by trash-talking Disney trivia veterans. A woman who looked to be my age was cackling with laughter while sitting between her parents.

Did my family not have a thing? I had always seen the magic of Disney as just another product to buy into (and know, we do own quite a few of those products in the form of Disney movies and princess dresses — we are not actual monsters). But to these people, the magic truly seemed authentic. Were they actively choosing to feel this way or did it come natural, and we were the ones missing out?

When the ship was leaving Geiranger, one of our ports of call, my husband and I pawned our kids off on their grandparents and with glasses of wine in hand, headed to the top deck. The sun was setting through the fjords on a truly breathtaking vista.

Along the crowded balcony, we sidled up to two middle-aged couples, who, we realized, were the ones we had first met upon embarkation.

There had to be more to it than a love for Disney to compel four adults traveling without children to go on sixteen Disney cruises, a cruise line that in comparison to others is certainly not cheap. So I simply asked the woman standing closest to me.

She told me the boat was nicer. Guests were treated like royalty. “And,” she shrugged offhandedly, “I do like Disney.”

That night our dinner was at Rapunzel’s Royal Table. Characters from the movie Tangled ran around the dark banquet room chasing each other with knives. Others sang and danced. I could not hear my husband speak who was sitting right next to me.

He raised his eyebrows and shouted over the din. “You have to more than just like Disney to come on this without your kids.”

Just then, Rapunzel skipped up to our table. As promised over the intercom, she was briefly making appearances at each and every table.

My daughter appraised the golden-haired princess. “You didn’t perform last night,” she said. I knew what my daughter meant. In Tangled the musical (which was quite good), this Rapunzel was not that actress. That performer, I am sure, never had to darken the door of one of these dining halls.

Without breaking character, B-list Rapunzel explained that the girl pretending to be her on stage had done a marvelous job. “Now,” she sing-songed, “do you want a photo?”

“No thank you,” my daughter said.

I went to bed that night resigned — we were impervious to Disney’s magic. The cruise was extremely nice. The food was surprisingly great. The service was fabulous. Norway itself was incredible. But we just weren’t a Disney family.

The next day, my husband and I left our kids with their grandparents and went on a hike. I had booked us a via ferrata, which is a type of hiking where in a harness, you click in and out of cables and ladders as you hike up a mountain path. In our experience, it’s usually a little harder than an intermediate hike, but nothing too strenuous.

Two hours into our hike, it started raining hard, and soon the path took a sharp incline, becoming more like advanced mountain climbing, something in which we were unprepared.

And then my husband fell.

His harness caught him from plummeting to his death, but he still fell nearly 30 feet, the bones in his leg shattering as his rope swung him into the mountain face.

For the next hour, we were drenched in cold rain as we clung to the mountain trying to figure out what to do. Eventually, a guide was able to get a helicopter to rescue my husband and fly him several fjords over to the closest hospital. I was left to finish the hike in order to catch the cruise boat before it left port. And since we didn’t book the excursion through Disney, we had no trip protection and no promise of safe passage. The guide was able to get a hold of a Disney representative who said the boat would wait an extra 15 minutes for me, but still, I figured we were screwed.

But I had grossly underestimated Disney and its magic.

Upon reaching the summit and riding the gondola down, I was met by a taxi arranged by Disney that rushed me to the boat. At the boat, a Disney representative was waiting for me, so I could run aboard and pack an overnight bag for my husband that the representative would drive to the hospital several hours away. That night, my husband received an unexpected call from a Disney employee, highly positioned at the corporate offices in Orlando, who spent hours helping him with travel arrangements. The next day when my husband flew from the hospital to meet us at the next port, another Disney representative helped him from the airport to the boat.

Meanwhile, on the boat, my kids, worried for their daddy, were gifted two giant plush animals. And the next morning when the kids and I left our room for breakfast, we noticed our door had a few butterfly magnets on it. I figured they were magnets my 2-year-old had stolen from other doors, something he kept trying to do.

But later that day, there were more magnets, and the next day, even more.

By the end of our trip, our door was one of the most decorated on the boat — covered in homemade Disney-themed magnets and postcards with encouraging notes.

On our last morning on the boat, my daughter and I carefully removed all the magnets and put them in a bag to bring home.

“Why did people do that?” she asked.

“I think they were just being nice,” I said with a shrug. “Because daddy broke his leg.”

“Pixie-dusting is what they call it,” I added, “like sending people good luck.”

“We should do that,” she said quietly.

“We should,” I said nodding my head and realizing I meant it.

For, I was finally understanding that underneath the Mouska-armour, that was what it was all about — finding your bit of light in darkness. And perhaps the Disney tribe were the courageous ones who were nervy enough to own something when it made them happy and not care if it made them seem a little fanatical or naive.

When we disembarked the ship in Dover, it was more of a limp. Our luggage had somehow quadrupled. My husband was in a wheelchair and wearing Mickey Mouse pajama bottoms that he bought on board because none of his clothes fit over his cast. Our son carried a Sven moose that was nearly his size, and our daughter clutched a Tigger and a gallon sized Ziploc filled with our pixie dust take.

To a bystander, we left the boat appearing like a veteran family of Team Disney, and although untrue, the thought no longer sound terrible, not at all.

More Like This
As The Non-Bio Mom, I Always Felt Like My Son’s “Other Mother”
35 Relatable Quotes That Prove Being A Mom Isn’t Easy
How My Neurodivergent Son Taught Me To Move Through Life In A Wholly Different Way
It's A Beautiful Day In Jenny Slate’s Neighborhood