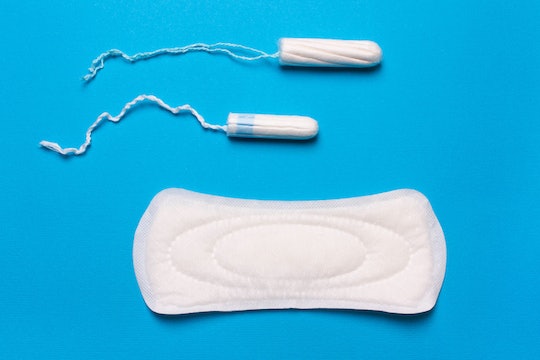 Though it's 2019, women are still struggling to get the message across that menstrual hygiene products are, indeed, a basic necessity. They're something that shouldn't be considered a luxury in any way. Still, though, providing such products to women in prison, for instance, is a challenge. In a hearing earlier this month, a Maine state representative said free menstrual products, like pads and tampons, for incarcerated women would turn jails into "a country club."

"Quite frankly, and I don’t mean this in any disrespect, the jail system and the correctional system was never meant to be a country club..they have a right to have these and they have them. If that wasn't the case, then I would be supporting the motion, but they do," Maine Senate Rep. Richard Pickett said, according to Bangor Daily News reporter Alex Acquisto. The comments came during a Criminal Justice and Public Safety Committee debate over LD 628, the Maine Beacon noted, a state bill that would give incarcerated women in correctional and detention facilities free hygiene products instead of the limited amount of supplies that they are currently allotted.

"Maine Correctional officials testified that feminine hygiene products are easily accessible and provided free of cost," John C. Bott, the director of communications for the Maine House Republican Office, tells Romper by email. "Rep. Pickett supports that along with everyone else. He did not feel that a law was needed to do what is already being done. The country club remark was unrelated to feminine hygiene products."

The legislation advanced with a 6-4 vote, which was opposed solely by Republican lawmakers according to HuffPost. According to Acquisto’s tweets, Pickett argued that the bill was an effort by the Democrats to "micromanage the jail systems."

But Whitney Parrish, the director of policy and program for the Main Women’s Lobby, explained how important free menstrual products are. "You’re given a limited supply of menstrual products per month, often of low quality due to cost saving, and when you run out, you’re out," she explained, according to HuffPost. "You may have no money to go to commissary, and if you do, you may have to weigh that purchase against other necessities, like making phone calls to your children or attorney."

"Without adequate access to clean and hygienic menstrual products, you may face serious health consequences," Parrish continued. "This happens every single month, and for some with irregular cycles, more frequently. Menstrual products are not a luxury item by any means."

In 2017, CNN reported that the Bureau of Prisons (BOP) issued a memo requiring all federal facilities to provide free menstrual products for those who need them. According to the Maine Beacon, however, no such policy is in effect for state prisons and county jails. Only four states (Colorado, Kentucky, Maryland, and Virginia) and New York City have enacted laws to provide free menstrual products to incarcerated women, according to the nonprofit organization BRAWS (Bringing Resources to Aid Women’s Shelters). According to its 2018 report, only about 12 state and local jurisdictions had introduced or passed legislation to improve accessibility to menstrual hygiene products at the time.

“Ahh yes, the only place where tampons are available—a country club,” another Twitter user remarked.

“Access to menstrual products is a right, not a privilege,” the ACLU tweeted when the news broke.

The uproar caused by Rep. Pickett's comments adds to the debate over women's rights and equity in menstrual hygiene. Unfortunately, it seems as though the conversation still isn't over.

More Like This
Can States Ban The Abortion Pill? FDA Rules May Make That Hard
Here’s How To Fight For Abortion Rights
Obamas Issue Powerful Statements After Supreme Court Ends Roe v. Wade
This Map Illustrates Just How Many States Would Ban Abortion If Roe V. Wade Is Overturned