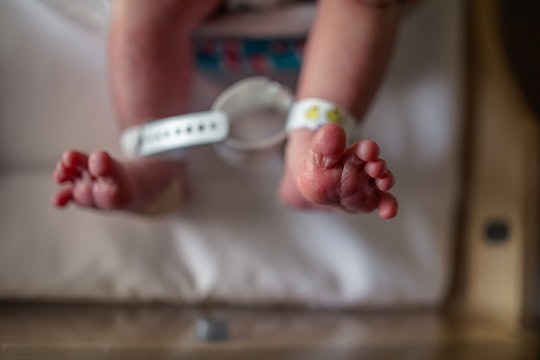 The human body remains a mystery to so many of us. Just when you think you have a handle on all of the ins and outs of our physiology, something comes along to make you realize that, just like Jon Snow, you know nothing. File this particular story away under things you probably didn't know could happen but apparently can. As reported by Metro and Mamas Latinas this week, a mom recently gave birth to a "pregnant" baby in Colombia, and while the condition is extremely rare, it's happened before.

Mónica Vega of Barranquilla, Colombia, gave birth to a baby girl via C-section after carrying her for 37 weeks earlier this month, according to Mamas Latinas. While this probably doesn't seem especially unusual, here's where things get a bit strange. As Mamas Latinas explained, her daughter Itzmara was born "pregnant" with her own twin and had to have a life-saving C-section of her own just 24 hours after being born. The twin fetus was inside Itzmara's stomach, according to Metro, in its own amniotic fluid with an umbilical cord, bones, arms, and legs, but no brain or beating heart.

Fortunately, doctors had been able to diagnose Itzmara's condition — which is called fetus in fetu — before she was born. As such, they were able to make the decision to deliver the baby at 37 weeks so the fetus wouldn't continue to grow and potentially cause serious damage to Itzmara, according to Argentinian news website, Infobae.

According to the U.S. National Library of Medicine, fetus in fetu is a rare anomaly when the presence of one twin exists within the body of the other. Generally speaking, the twin separates within the first week or so of gestation.

In the case of conjoined twins, the separation occurs after the second week, according to Metro, but with fetus in fetu the separation doesn't happen until around 17 days after the fact. At which point, one twin becomes absorbed inside the other twin's body, as ABC News explained.

The National Library of Medicine notes that there have only been roughly 100 reports of fetus in fetu since it was first discovered in the 19th century.

In 2015, for instance, a baby was born in Hong Kong "pregnant" with her own twins, according to Live Science. In this case the two fetuses were not discovered until after she was born and doctors suspected she had a tumor, as Live Science detailed, and only during surgery did they discover the two fetuses between her kidney and her liver and removed them.

Vega's physician Dr. Miguel Parra from La Merced Hospital discovered the anomaly during a routine ultrasound and made the decision with Itzmara's mother to see her delivered early, according to Mamas Latinas. She has now undergone her incredibly unusual surgery and is reportedly recovering well.

As Vega explained to local news media, as Metro reported, "I have never heard of anything like this in my entire life. I really did not expect this to happen."

This is the sort of experience no parent would expect, and yet it happened. Thankfully Mónica Vega had access to well informed doctors who made sure she and her daughter were well cared for in an extremely rare situation. Now, both mother and daughter can move forward with their lives, knowing they've come through more than most, all within their first 24 hours together.

More Like This
Can You Bowl While Pregnant? Experts Weigh In
Considering Getting A Tattoo While Pregnant? Here’s What To Know
What You Need To Know About Eating Burrata During Pregnancy
I Found Gender Euphoria In My Second Pregnancy