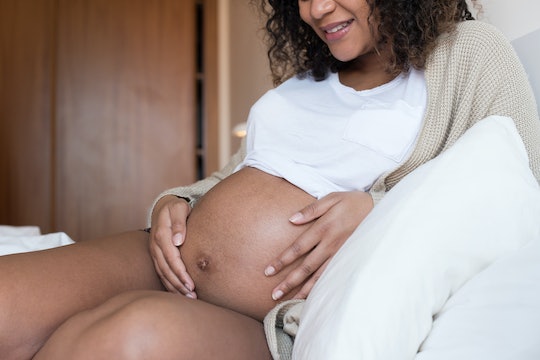 In recent years, science has begun shedding more light on the importance of a healthy microbiome — aka the microscopic organisms and bacteria that inhabit our skin and all of our organs — and the emerging data is basically why things like kombucha and kefir are now appearing next to kale, quinoa, and coconut oil on the shelves at health food stores. Much of the hype surrounding the benefits of probiotics is still lacking solid research, but a recent study from the University of Virginia has found that a mother's gut health might affect her baby's autism risk, and it could signal a huge breakthrough in detecting, and possibly preventing, the developmental disorder.

Given the challenges associated with having a child on the autism spectrum, it's no surprise that there is a huge need to learn more about what causes autism, and how it can be prevented and treated. The lack of knowledge is one reason why discredited theories about vaccines continue to deter parents from immunizing their kids according to the recommended schedule, and it's also why many parents with children who already have autism are left to rely upon unproven alternative therapies for help. But the UVA study found that taking probiotic supplements during pregnancy, or making certain dietary changes, may actually strengthen the mother's gut biome in a way that could prevent her child from developing autism. And while it still has a long way to go before it can be definitively applied to pregnant women (the study was done on lab mice) it's still a pretty groundbreaking idea.

In the UVA study, researchers found that they could actually "prevent the development of autism-like neurodevelopmental disorders" in mice by blocking interleukin-17a, an inflammatory molecule made by the immune system, according to Science Daily. And it's not entirely surprising: IL-17a has already been linked to conditions like rheumatoid arthritis, multiple sclerosis and psoriasis, and blocking the molecule is often involved in some of the treatments that are available. But blocking IL-17a during pregnancy as a preventative measure against autism isn't as easy or straightforward as it might sound. That's because IL-17a plays an important role in fighting infection, and it's not yet clear what other risks pregnant women could face without it.

The good news at least? According to lead researcher Dr. John Lukens, blocking IL-17a isn't the only option: in a press release, Lukens explained that "the microbiome is a key contributor in determining susceptibility [to autism-like disorders]," meaning that altering a mother's gut bacteria could be just as effective.

The reason, Lukens explained, is that a mother's microbiome affects the way her baby's brain develops, and it also influences the way the child's immune system will respond to things like infections or stress. If the mother has a microbiome that is unhealthy or out of whack, it could mean her child will be more likely to develop neurodevelopmental disorders. But if it can be restored by taking probiotics, making dietary changes, or even through things like fecal transplants (already a treatment option for people suffering from recurrent C. difficile colitis infections, according to Johns Hopkins Medicine), the risk can be diminished.

Unfortunately, that doesn't necessarily mean preventing autism is as easy as grabbing a bottle of probiotic supplements at the grocery store and calling it a day. For one, Scientific American noted that the types of bacteria being sold in probiotic supplements isn't necessarily the kind that your gut needs, and even if it were, you likely won't get enough bacteria for it to actually be helpful. For the most part, studies on supplements have yet to find that they're valuable if you're otherwise mostly healthy.

Yet probiotic therapy as a medical treatment has already been shown to have benefits for certain conditions. In addition to fecal transplants, probiotics have been shown to improve symptoms of irritable bowel syndrome (IBS), according to Scientific American, and they've also shown promise to ease some of the side effects of antibiotic use. And for infants born premature, probiotics may also have a life-saving impact: a study published in May 2014 in the Journal of Pediatrics found that administering probiotics to babies in the NICU "substantially reduced the frequency of [necrotizing enterocolitis]," a potentially-fatal disease that causes an infant's gut tissue to break down.

In other words, scientific research into the role of the microbiome sounds like it might unearth some seriously valuable findings, and in the future, that may also include preventing autism and related disorders. That doesn't necessarily mean that women who are pregnant or trying to conceive should automatically start popping supplements, or downing fermented everything (unless, of course, sauerkraut and kimchi happen to be your pregnancy cravings). But it does sound possible that a healthy diet full of gut-friendly foods might just offer up some extra developmental protection for your growing baby.

More Like This
OB-GYNs On How The End Of Roe Changes How They Can Care For Us
Considering Getting A Tattoo While Pregnant? Here’s What To Know
When Does Pregnancy Horniness Kick In?
This Is What Experts Say About Eating Hot Dogs During Pregnancy