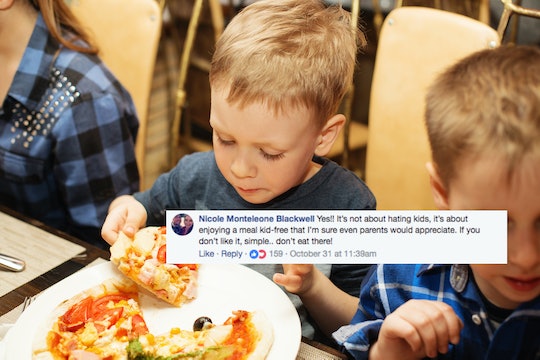 If you're a parent with young children, you probably have a shortlist of adult restaurants that you can take your kids to without getting a healthy dose of side-eye from kidless patrons. I'm talking about the restaurants that have alcohol and a great kids menu — or just any place that adults can feel like adults. As many parents know, these places are few and far between, which is why a large number of parents in Tampa, Florida, are freaking about this pizza restaurant's kids ban.

On Oct. 26, a Facebook group called "Tampa Bay Moms Group" shared a hot-button post about Hampton Station, a pizza restaurant in Tampa. The post alerted fellow parents that Hampton Station recently enacted a "No Children" policy, a rule that has enraged many parents on Yelp and across social media. Many parents are upset that the casual pizza eatery and bar, which has served many families throughout the past few years, enacted the ban abruptly and seemingly without little notice. A few parents are even upset by the way the ban was announced; according to the Tampa Bay Moms Group, Hampton Station now has a a large "NO CHILDREN" sign on its door. Hampton Station didn't immediately respond to Romper's request for comment.

One frustrated patron wrote, according to Yelp:

No children. All caps. The biggest font, at the top of the door. All after gladly accepting money from families for two years. Rude. The owner is entitled to his opinion. "No Children Please" would suffice. Have some class. Have some manners.

I think the term "NO CHILDREN" in all caps comes across a little...I don't know...harsh? Perhaps "18 and up only" or "Adults only" wouldn't rustle so many feathers.

But most of all, parents are upset that they can no longer take their kids to an adult-style restaurant. For many parents, Hampton Station was a place where they could enjoy a grown-up atmosphere with their families, because sometimes the lunch counter at Target just doesn't cut it.

Pretty average neighborhood pizza place... used to be a nice casual spot to take the family for pizza, but now that children are banned I can't see any reason to go there. It's just not the type of place I'd personally go for a "night out"-- there are lots of other restaurants and bars in the area with more of a beer selection, better atmosphere, etc.

It’s plain discrimination. First of all, like others have said, this is a restaurant that serves alcohol. It’s zoned as a restaurant. They serve pizza & wings. We’ve been going there frequently since they opened - with kids and without. Secondly, it’s awfully puritanical to claim that children shouldn’t be around alcohol. Let’s let that decision be up to the parents. In many other countries (with much healthier attitudes towards alcohol and less alcoholism) alcohol is part of life and children are not shielded from it.

Of course, there's another side to this debate. In response to the backlash, Hampton Station argued that the controversial decision was made with safety in mind. Apparently, there have been incidents in which "kids were endangering themselves and other patrons." Hampton Station shared the following message to a neighborhood group, according to Scary Mommy:

We had a few incidents the past couple of weeks where kids were endangering themselves and other patrons. From a liability standpoint we just can't afford to have that. So after a long discussion and plenty of thought on the issue, we decided this was our best course of action. It's a hard decision and I'm sure it's going to hurt our business, but I just couldn't live with the fact that a child might get hurt at Hampton. I know we are probably going to face a social media backlash and probably lose some of our longtime customers, but hopefully we can make it through this. We had a lot of great kids come in to Hampton and we are going to miss them, but this had to be done for everyone's well being. If anyone has any concerns or questions please feel free to give them my number. It's a tough decision we have people's feelings, jobs and our business at stake and there was no easy answer.

It goes without saying that safety is a huge priority for any parent and business owner, so it sounds like Hampton Station made a reasonable call given its claims. Additionally, some parents have applauded the restaurant for making the atmosphere more adult-friendly and conducive for date-nights, etc. One commenter wrote, according to the Tampa Bay Moms Group:

There are so many other places to eat. Take your kids somewhere else. When I go out without my kids, the last thing I want to do it go somewhere and sit next to someone else's kids (happens EVERY year on our anniversary). It's nice to see places for adults only.

Some people also argue that this is how capitalism functions: private businesses are allowed to make whatever rules they want regarding who they will serve, and people who don't like those rules can take their business elsewhere, which could affect the profits of the business choosing not to serve kids, for example. (This is sometimes called "voting with your dollar.") The opposing side of that debate, though, argues that allowing businesses to choose whom to serve based on its own rules and views can lead to discriminatory business practices, like the famous baker who refused to bake a cake for a gay couple's wedding.

Although most of the back-and-forth between commenters has been respectful, a few parents did shame former patrons for taking their kids to an establishment where alcohol is served. Obviously, it's not OK to shame parents who drink at restaurants when their children are present, and this isn't what this debate is really about. What parents should be focusing on is the why behind Hampton Station's kids ban, and how families and business owners can work together to make restaurants a safe environment for all patrons.