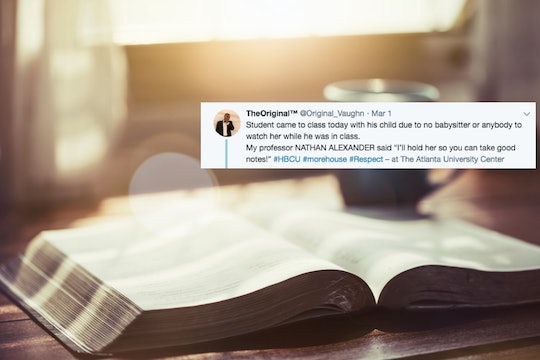 Many parents can understand the struggle to find adequate and affordable childcare while juggling their professional, student, and personal lives. But fortunately, there are kind people out there who swoop in to help parents who are put into tricky binds. Like when Morehouse College student Wayne Hayer couldn’t get a babysitter for his 5-month-old daughter Asada and his algebra professor came to the rescue.

It all started two weeks ago, when Hayer's mathematics professor Nathan Alexander had opened his classroom doors to Hayer's daughter, according to The Washington Post. "Bring her to class," Alexander had said without hesitation, the newspaper reported. Hayer, who didn't want his wife to struggle with Asada on public transportation while picking up the infant's birth certificate, was nervous about the idea at first, according to CNN, but it didn't take long before the little girl became a welcome addition to the class.

But the viral moment the internet can't stop fawning over happened last Friday when Alexander offered to hold Asada while Hayer took notes in class, according to a viral Facebook post originally posted by classmate Nick Vaughn. “Not only did he teach the entire lecture with the child in his arms but also stayed after class helping those with questions about today’s lecture with the child still in his arms as seen in the pictures," Vaughn shared on Facebook.

Facebook and Twitter posts of the heartwarming moment show Alexander helping students while adjusting little Asada’s pacifier and holding the 5-month-old as he solves algebra equations on the whiteboard.

Since first sharing the sweet moment, Vaughn’s post has received over 304,000 likes and has been retweeted nearly 75,000 times.

But the photos are more than just a viral post. The moment smashes negative racial stereotypes about African American men by capturing Hayer’s dedication — the Morehouse College senior works two jobs and is a father and husband, according to The Washington Post — and Alexander’s commitment to his students’ successes.

"There’s a negative stereotype about African American men not being fathers to their children and a myth that most black people come from single-parent households," Hayer told The Washington Post. "To see a young African American man do it was empowering for people to see. The image and symbolism were important in changing how we view masculinity."

As for Alexander, he sees the moment as a part of his job as a professor. "Part of my role and goal as an educator is to provide opportunities for students," Alexander told CNN. "We work to build a community in class.” And in an interview with The Washington Post, he shared his vision for working students and fathers like Hayer, saying: "I want a world where Wayne doesn’t feel like he can’t get ready for his exam even though his child care fell through."

And it’s a world that resonates with many. “This is what education should be like,” one Facebook user posted. Another social media user replied to the post on Twitter, saying: “Imagine what people could accomplish if they received this level of support in school.”

Others reflected on their own success stories and struggles of being both a student and parent. One Twitter user chimed in, "I was married before I graduated from undergrad, and had twins a couple years into PhD. I’m only faculty now because of my advisor who was supportive like you."

Another Twitter user shared, "Meanwhile mine aren’t due until May and I couldn’t tell you the last time I washed my hair or read more than 2 pages in one sitting. I’m falling apart already."

In a statement to CNN, Professor Alexander drilled home his lesson and what the viral photo represents: "[Hayer] works two jobs, is a full time student, is involved in leadership programs at school and is a parent. This photo serves as a reminder of what parents have to do every day and how important it is to have affordable childcare."

In the meantime, the special moment he created serves as an example for his students and parents everywhere to not let anything get in the way of reaching their goals and that raising a child does, indeed, take a village.

More Like This
Elon Musk's Child Files To Change Name, No Longer Wants To Be "Related" To Father
Mom's TikTok Sparks Debate On Whether It's "Normal" For Babysitters To Sleep On The Job
Viral TikTok Breaks Down How Beautifully Bluey Depicts One Character’s Infertility
This Reddit Post About Two Sisters In A Fight Over Breast Milk Is Complicated & So Sad