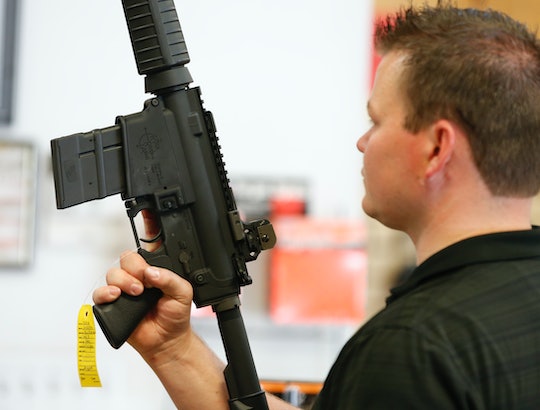 A mass shooting at Marjory Stoneman Douglas High School in Parkland, Florida last Wednesday left 17 dead. Many Americans have rallied together in the wake of the tragedy to demand stricter gun safety laws. However, there are plenty of citizens who are making it clear that they prioritize other things much more than gun safety. For example, an age 7 to 9 baseball team is continuing to sell raffle tickets for an AR-15 — the same weapon that Parkland's mass shooter used to open fire last week.

The Neosho, Missouri-based youth baseball team came up with the idea for the raffle before the shooting, explained the team's coach Levi Patterson to the Kansas City Star, who first reported the story. Patterson told the outlet that he thought about changing the raffle prize following the news of the Parkland shooting, "but ultimately decided to 'turn it into a positive thing' after 'getting the hate,'" as per the outlet.

As criticism of Patterson's choice grew on Facebook, so did his defense. "Gun raffles have been going on for years," he wrote as a response to a since-deleted Facebook post, according to the Kansas City Star. "Evil has and will always exist. Our hearts break for those involved, and we do not take that lightly.” He also defended the decision by explaining where the gun came from — it was a gift from a team member's dad. He co-founded Black Rain Ordnance Inc., which is a Missouri-based "precision ﬁrearms manufacturer," according to its website. The company posted several images of AR-15s on its Facebook page in the days following the shooting.

We were approached by a local Neosho youth traveling baseball team to donate a product that we manufacture here in our local gun friendly community of Neosho, Missouri. As always, we do everything in our power to support the community that also supports us as a business. We support other organizations whether it be local, regional or national with firearm donations to help support their initiatives. The winner of these donations must abide by all Federal, State and Local regulations that are set in place for taking ownership of a firearm.

Altman added that more information about said firearm ownership regulations be found on the ATF's website.

Many used Twitter to express their feelings about the raffle, criticizing the insensitive timing and inappropriate nature for a team of children ages 7 to 9.

Some critics even posted their complaints directly on Black Rain Ordinance Inc.'s Facebook page, trying to get the company to see why the raffle is problematic. "You are actually raffling off a gun like the one used in Parkland! Have you no shame!" one person commented on a photo. "You have no moral compass," added another. "Having schoolchildren raffle off the rifle that has killed multiple children in multiple school shootings is basically stone cold and surely you can see this," wrote someone else.

However, not everyone saw the same problems. "Can someone please tell me where to find info about the raffle tickets? Thank you!" someone commented on the same photo. That's right — as the story spread, more people tried to buy raffle tickets to support Black Rain. Patterson told the Kansas City Star that people from out-of-state have tried to buy tickets via Facebook, and that the team has received a flood of donations.

And in response to some of the criticism, Patterson clarified that none of the players will be forced to sell tickets for the rifle. “We appreciate your ‘concern’ but please understand, we are not, have not, and will not force one of our boys to sell raffle tickets for the Black Rain AR15 Spec 15, if they are uncomfortable doing so,” Patterson wrote on Facebook, according to the Kansas City Star. However, if the boys want to remain on the team, they will have to be associated with a team whose leadership does not prioritize gun safety.

If you want to do something about the Parkland shooting, here's a list of ways you can help the victims.