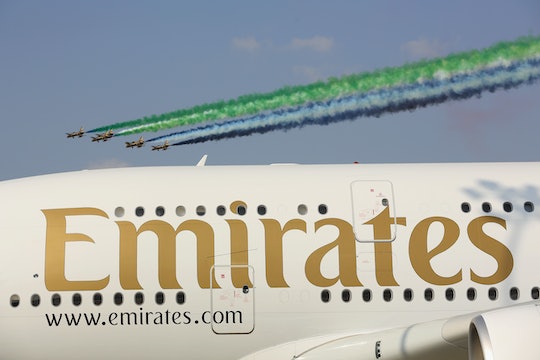 A Woman Was Reportedly Kicked Off Her Flight For Period Pains, & People Are Pissed

Periods: They suck. Every month, a person who menstruates has their insides torn apart in order to shed some old uterine lining that doesn't want to stick around. There are cramps and constipation and irritability and all kinds of stuff all of us who have periods really don't want to experience like clockwork. But it happens, and lives are lived. Work is performed. Relationships are had. Flying, though, seems to be a different story: Recently, a woman claims she was kicked off her flight for period pains, because, you know, talking about menstrual cramps in public still elicits a sense of panic and dread — even in 2018.

Beth Evans and her boyfriend, Joshua Moran, were boarding an Emirates Airlines flight to Dubai for vacation when Evans said she complained about mild menstrual cramps, as one does, according to Business Insider. But the couple said that they were reportedly forced off of the flight after a flight attendant overheard Evans, a 24-year-old teaching assistant, telling Moran about her period pain.

Emirates did not immediately respond to Romper's request for comment, but the statement it issued to The Washington Post read:

The passenger alerted the crew onboard that she was suffering from discomfort and pain and mentioned that she was feeling unwell. The captain made the decision to request medical support and offload Ms. Evans so she could access medical assistance as needed. The safety of our passengers and crew is of paramount importance, and we would not have wanted to endanger Ms. Evans by delaying medical help had she worsened during the seven-hour flight to Dubai.

But Moran disputed this account in an interview with The Sun. The 26-year-old barber said the flight attendant reportedly only overheard Evans talking about her menstrual cramps. Moran told The Sun that his girlfriend was "in tears and getting upset" during the encounter, adding,

It's embarrassing to have to explain about period pans when it's being overheard. They didn't have anyone look her over. They just contacted a medical team in the US and they said Beth couldn't fly.

The couple each spent £400 (or $560 in U.S. dollars) on their flight to Dubai, according to The Sun. They each had to shell out another £250 (or $350) to reschedule their six-and-a-half-hour flights so the couple could actually go on vacation.

I understand that airlines have the right to remove passengers due to medical concerns. But to be forced off of a flight for menstrual cramps, if Evans' account is accurate, is ridiculous— and, in fact, not in line with airline policy.

As The Washington Post pointed out, Emirates states on its website that some situations are assessed on a case-by-case basis, but generally, "any medical condition that would render a passenger unable to complete the flight safely, without requiring extraordinary medical assistance during the flight, is considered unacceptable for air travel." Those conditions include contagious or communicable diseases, pregnancy beyond 36 weeks, severe respiratory diseases, congestive cardiac failure, uncontrolled seizures, and gastrointestinal lesions, among others.

Don't get me wrong, periods can be awful. As someone with polycystic ovary syndrome (PCOS), Captain Flo can force me to stay in bed for a few hours. But that doesn't mean the ovary that's raging against my body would render me unable to fly. And that's true of anyone who menstruates, PCOS or not.

What reportedly happened with Emirates goes to show that menstruation is still considered crude and taboo, like it doesn't happen every month. But people who menstruate shouldn't have to still fight to be taken seriously, or to be treated normally. It's 2018, for Playtex's sake.