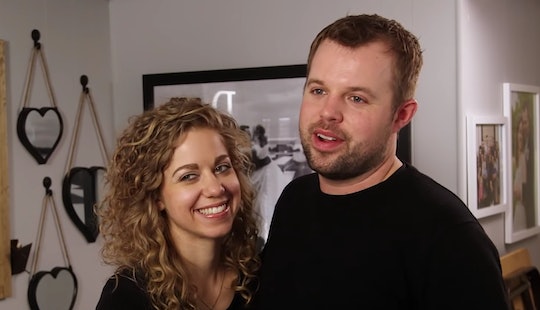 Counting On fans celebrated the news of a new Duggar babe joining the ever-expanding brood last month. And now, John David and Abbie Duggar have opened up about their daughter's birth in a brand new special for the TLC reality series, revealing that the new mom was in labor for more than a day.

John David and Abbie welcomed their first child, a little girl named Grace Annette Duggar, on Tuesday, Jan. 7. And as it turns out, "Gracie," as her parents call her, arrived after Abbie was in labor for almost 36 hours. In the new special, which is now available to watch for free on TLC's website, Abbie expressed her desire to labor as much as possible at home, but decided to go to the hospital once things progressed. Once there, however, Abbie's labor had stalled.

"You know, it feels like a rollercoaster coming," Abbie's mother-in-law, Michelle Duggar, said of her labor. "But instead of riding on it, it feels like you're getting ran over by it."

Abbie and John David were then sent home so her labor could progress more. After two separate visits to the doctor and another trip home, Abbie returned to the hospital once she was 3 centimeters dilated. By then, she had been in labor for more than 24 hours.

In the end, of course, the long labor was worth it once the couple got to meet Gracie and bring her home to introduce her to her many aunts, uncles, and cousins two days later. "Now that the family has got to see little Gracie, it's going to be fun just to hang out here by ourselves for a little bit, with a little help every once in a while," John David shared. "And just kind of soak in these first days and weeks with our new little girl."

Although the Duggar daughters have had home births in the past, Abbie opted to give birth at a hospital in a "low intervention birth room" where she was able to get Pitocin — a synthetic version of the hormone oxytocin — to advance her labor and an epidural to help her through her contractions. "It was the best thing," Abbie said of her epidural, jokingly adding, "otherwise I'd probably still be trying to push her out."

Fans will surely get to see more of the couple and their newborn baby girl when the next season of Counting On airs on TLC later this year.