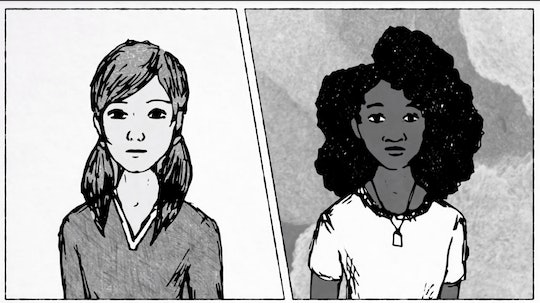 Adults Are Failing Black Girls By Believing This Harmful Bias

It's no secret that racism is still alive and well in the U.S. Just look at the white nationalist groups that have found a renewed voice in today's society. Or the fact that young black men continue to be incarcerated and murdered at alarming rates. These are just a few examples of blatant or systemic racism. But the thinly veiled, everyday type of differentiated treatment can also be harmful — and have very real consequences. And adults are failing black girls by believing this harmful bias, according to a new research.

A new study from Georgetown Law's Center on Poverty and Inequality has found that black girls regularly experience something called adultification bias. In 2017, the center published its Girlhood Interrupted study, which showed that adults view black girls as more adult-like and less innocent than white girls. However, this new research has taken it a step further by discussing these experiences with black girls and women — and getting their input about how it should be addressed.

“Our earlier research focused on adult attitudes and found that adults think black girls as young as 5 need less protection and nurturing than their white peers,” report co-author Rebecca Epstein said in a Georgetown news release. “Our new research elevates the voices of black women and girls themselves, who told us that they are routinely affected by this form of discrimination.”

For the new study — Listening to Black Women and Girls: Lived Experiences of Adultification Bias — black girls and women between ages 12 and 60-plus from across the U.S. were interviewed. Here's a look at what researchers found, according to the news release:

“Almost all the black girls and women we talked to said they’d experienced adultification bias as children,” said Jamilia Blake, another co-author of the report. “And they overwhelmingly agreed that it led teachers and other adults to treat them more harshly and hold them to higher standards than white girls.”

Focus group participants were asked for suggestions to help overcome adultification bias against black girls. They said they hoped awareness raised by the center's research would lead to action that will decrease the bias. Additionally, the participants expressed that targeted training for teachers and other authority figures would be the most effective way of accomplishing this. As one study participant in the focus group for girls ages 13-17, put it:

I feel like, as teenagers, we still need to be protected... we still should be cared for and taught wrong or right. And it doesn't matter if we're like black or whatever.

Have you ever experienced adultification bias? The Center is asking black women and girls to share their stories at their new storytelling portal, EndAdultificationBias.org. Share your story, and help end this harmful treatment of black girls. Because they deserve so much better.