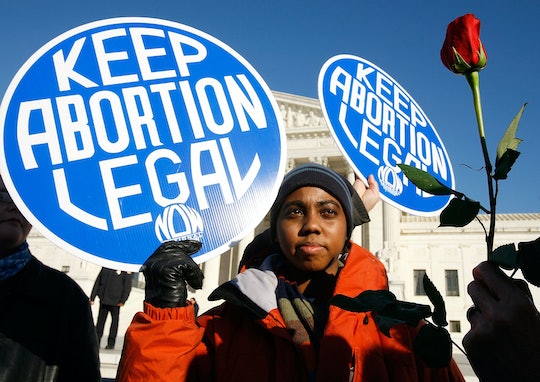 In a move that severely threatens and jeopardizes women's reproductive rights in the United States and attempts to challenge Roe v. Wade, lawmakers in Alabama have voted to ban nearly all abortions at any stage of pregnancy and there are no exceptions for cases of rape or incest, according to CNN. The state's Senate voted on the restrictive bill, that would punish doctors who perform them in Alabama with heavy jail time, late on Tuesday. In the aftermath, pro-choice advocates and medical experts are speaking out against the restrictive and extreme legislation.

"Alabama just passed a law that is a total ban on abortion, criminalizing the act and punishing women and doctors," NARAL Pro-Choice America President Ilyse Hogue said in a statement on May 14. "Anti-choice Republicans no longer even pretend to respect the law or the women that it protects."

The statement continued, "When this dangerous and demeaning law passed, Republicans stood up and applauded, while women wept. The Lt. Governor stated explicitly that this law is designed to overturn Roe v. Wade, as they capitalize on securing an anti-choice majority on the Supreme Court."

Alabama's strict anti-choice legislation, HB 314, would only allow the medical procedure to "avoid a serious health risk to the unborn child's mother" or if the fetus "has a lethal anomaly," as CNN reported.

Doctors who perform the procedure in the state of Alabama could be "charged with felonies and face up to 99 years in prison," according to The New York Times. And as NPR reported, if a woman has an abortion, she would not be "held criminally liable."

Though Democratic lawmakers had tried to include an amendment in the bill that would allow women to have the medical procedure done in cases of rape or incest, according to NBC News, it ultimately failed.

"You just said to my daughter... you don't matter in the state of Alabama," Alabama Senate Minority Leader Bobby Singleton said in response to the amendment failing, adding that it's an "archaic law," as NBC News reported.

These strict limitations are "designed to push the idea that a fetus is a person with rights," as NPR explained, as it's an attempt to challenge the Supreme Court's 1973 landmark case, Roe V. Wade, that made access to safe and legal abortions a woman's constitutional right.

Following the Alabama's Senate passing of the legislation — Gov. Kay Ivey, a Republican, still needs to sign it, which many expect her to, according to the Associated Press — pro-choice advocates and medical experts are already working to fight it and issuing reminders that it's still legal to get an abortion in all 50 states.

"Alabama's legislature just passed a law that criminalizes doctors and makes abortion illegal," the American Civili Liberties Union wrote on Twitter, adding: "Abortion is NOT a crime — it's a constitutional right. We will sue to stop this law from ever taking effect."

Legislation like the one Alabama lawmakers decided to pass are not only frightening, but also, as scientist Bill Nye accurately said in 2015, based on "ignorance," according to The Washington Post.

Dr. Daniel Grossman, a clinical and public health researcher on abortion and contraception, previously spoke out about Alabama's anti-choice and restrictive legislation. "These restrictions on abortion are not based in the practice of medicine or evidence-based research, just misogyny," he wrote on Twitter on May 10.

Access to abortion — a safe, normal, and common health procedure, according to Planned Parenthood — is being threatened more and more every day. Alabama's restrictive ban is not law yet and a fight against it is already in motion, but here's how you can help do your part as well.